I’m writing about your recent comments during a campaign event regarding a dorm-room assignment you said had been made by the University of Colorado Boulder. A parent at CU had contacted you about a daughter who was assigned to a room “with a biological male who considers himself a female.” In your anecdote, you said it was a university policy that was only reversed after your intervention.

When you said this, I thought maybe you didn't think your words would affect many people. But they did.

I’m a faculty member at the University of Colorado Anschutz Medical Campus, but I am not speaking on behalf of the university; these are my own views as a resident living in the same state that we both call home and love deeply.

As I read your comments, Heidi, I felt pain for the student who is transgender for being judged because of who they are. And being judged by a complete stranger who has never met this person, never looked into their eyes, never heard their story, their struggles, their fears and their hopes.

And in full honesty, I got kind of pissed at you. But a few weeks later, I actually started to feel empathy for you. I couldn’t connect with your comments, but I did get curious.

Where did you learn to judge people that you don’t know?

How does someone who has risked their life and relationships to become their true self impact you in any way, or impact your friend’s daughter?

What is it about us queer people that scares you so much?

We’re really not bad people, Heidi. We live a majority of our lives in a lot of discomfort because of this fear and stigma around us – it actually takes a lot of work to find safe places, safe people and safe communities. So much work that the stress takes a serious toll on us: up to twelve years off our life! That was from a study published in 2020 from Harvard Medical Magazine.

Twelve years, Heidi. That’s A LOT. Can you imagine? I've said that number so many times that I almost forget that it refers to my life, too. It's sad to think about losing so much life. 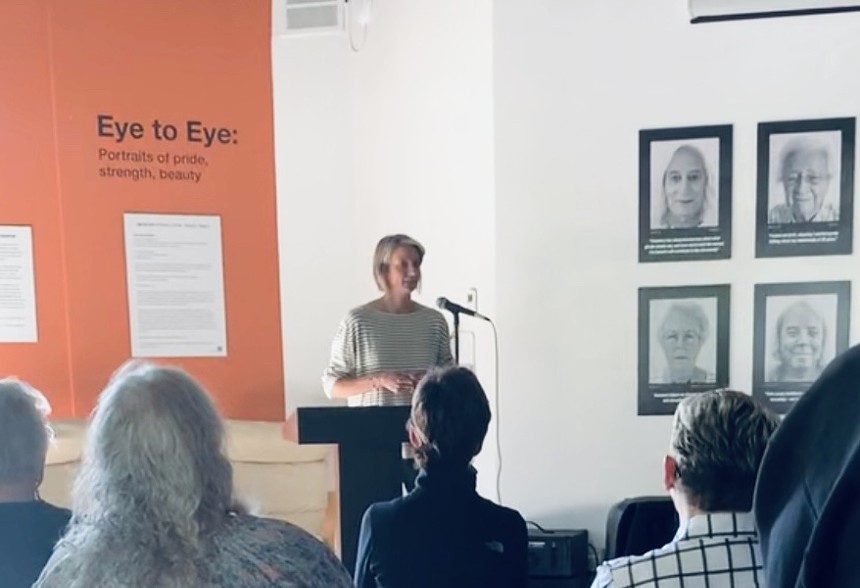 The author discussing LGBTQ issues.
courtesy Carey Candrian
I rely on statistics in my research, but sometimes those numbers aren't enough. People have a hard time making the connection between numbers about discrimination and the real people behind the data, and the impact it has on their lives and health. So I talk and listen to people about their experiences, and I share their stories.

I met Janelle a few years ago. We met outside her mobile home in the mountains near Colorado Springs; she’s moved out of state since. She was born a man and told me it felt like she had poison in her body for 58 years. Poison. Like rattlesnake venom in her blood. She transitioned in her early sixties. Lost everything – her wife, her home, her kids, her job. She told me she thought about taking her life every single day for three years because she felt like she was suffocating in her own body. Heidi, every single day for three years she thought about taking her own life. Every time she thought about transitioning, her family said they would reject her. She told me it was like having cancer and being denied chemotherapy over and over and over.

When she finally decided that becoming who she really is – a woman – was worth more than losing everything, she transitioned. She’s an amazing person, Heidi: crazy-smart and living a calm and quiet life near the coast, with her dog.

When I talked to her last, she told me that her biggest fear is that if she gets sick, no one will help shave her face and she’ll die as a man with a man’s name. That’s not right.

I know you’re super-busy running for Governor. That’s a serious job — so is a Regent! — to protect and advocate for all of us in Colorado.

I have one favor to ask: As you continue with your campaign, I hope you think about Janelle and the thousands of other LGBTQ people (including me) who live in the same community as you do. We are your neighbors, your colleagues, your friends and family members (even if you don’t want to think about it).

Are you familiar with the poet Mary Oliver? I love her writing so much, and have this quote of hers on my fridge: “Tell me, what is it you plan to do with your one wild and precious life?”

I never thought fighting against queerism would be on anyone’s list.

Carey Candrian is an associate professor at the University of Colorado Anschutz Medical Campus in the Division of General Internal Medicine and a Cambia Health Foundation Sojourns Scholar. She has spent much of her career investigating how health care suffers when patients aren’t able to be open with medical professionals about who and what matters most to them.

Westword.com frequently publishes essays on matters of interest to the Denver community. Have one you'd like to share? Send it to [email protected], where you can also comment on this piece.
KEEP WESTWORD FREE... Since we started Westword, it has been defined as the free, independent voice of Denver, and we'd like to keep it that way. With local media under siege, it's more important than ever for us to rally support behind funding our local journalism. You can help by participating in our "I Support" program, allowing us to keep offering readers access to our incisive coverage of local news, food and culture with no paywalls.
Make a one-time donation today for as little as $1.