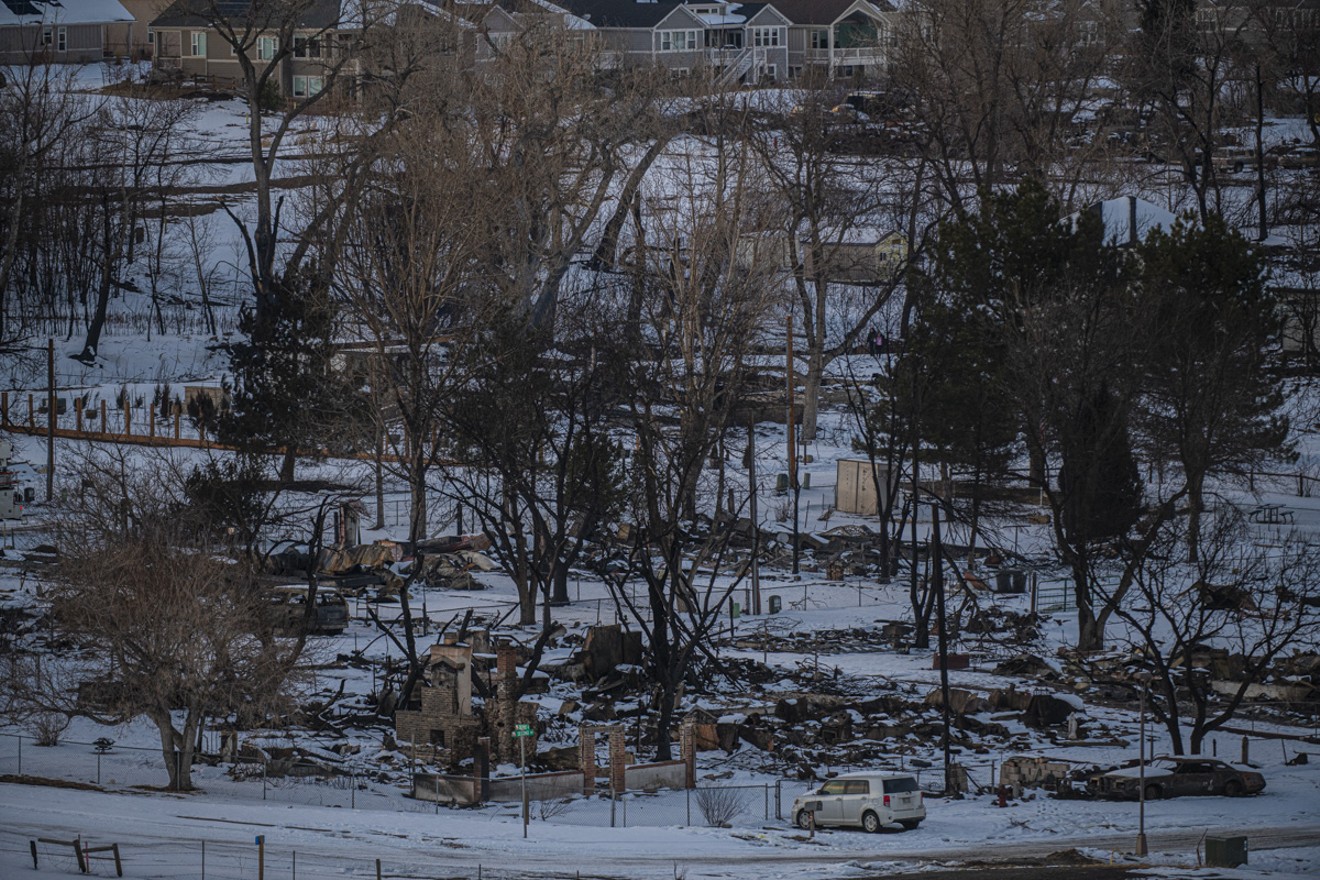 Thousands are homeless after the Marshall fire. Evan Semon
The Marshall fire that ripped through Boulder County on December 30 consumed over 6,000 acres of land and destroyed approximately 1,000 homes. The fires displaced more than 35,000 people, only a small number of whom were able to return to their homes over the next few days. Most of the evacuated persons woke up the next morning homeless, a designation they never could have imagined for themselves. Among them were my beloved aunt and uncle.

In the wake of this disaster, the local community as well as the state and federal government quickly mobilized resources to ensure safety and shelter for those who were evacuated from Louisville, Superior and Broomfield. At least eight emergency shelters were set up on the night of the fire, and more than a dozen funds taking monetary donations and other resources have been newly established. Boulder County, along with community partners, opened a Disaster Assistance Center four days after the fire to help people who lost their homes with everything from housing to mental health services. The Biden administration even issued a federal disaster declaration for the area, meaning Federal Emergency Management Agency (FEMA) funding is now available for housing assistance and recovery programs.

This comprehensive response to the victims left homeless from the wildfire contrasts with the reaction to the epidemic of chronic homelessness across the country As of January 2020, there were nearly 600,000 people experiencing homelessness in the U.S. Following the expiration of the COVID-19 eviction moratorium, this number has certainly increased. Yet, despite sustained and, in some places, growing numbers of persons experiencing homelessness, there has been no community-wide outpouring of support, no newly established assistance centers, and no FEMA funding for housing assistance and recovery programs. In fact, with a few notable exceptions, most cities have responded to the homelessness crisis with punitive police sweeps, urban camping bans and ballot measures that further criminalize homelessness.

The different reactions to these two populations of persons experiencing homelessness raise these questions: Why have the responses been so different, and what can be learned from the Marshall fire disaster to finally tackle the homelessness crisis in the U.S.?

Part of the reason for the contrasting responses is the differing nature and public perception of these populations. First, the victims of the Marshall wildfire are from solidly middle- to upper-class white, suburban towns with whom many Americans can identify. Second, the wildfire arrived suddenly and without warning, and every person was at risk of becoming a victim. Conversely, despite the large number of people experiencing chronic homelessness in the U.S., most Americans do not personally know someone who is homeless. Many see people on the street, keep their distance, and look the other way when approached in their vehicle by someone holding a cardboard sign. This physical and emotional distance breeds stigmatization of people experiencing homelessness and perpetuates the misconception that homelessness is self-inflicted: They must have done something to deserve it. Couple this with the long-standing criminalization of homelessness and the close association with substance use, and people who are affected are considered moral failures. 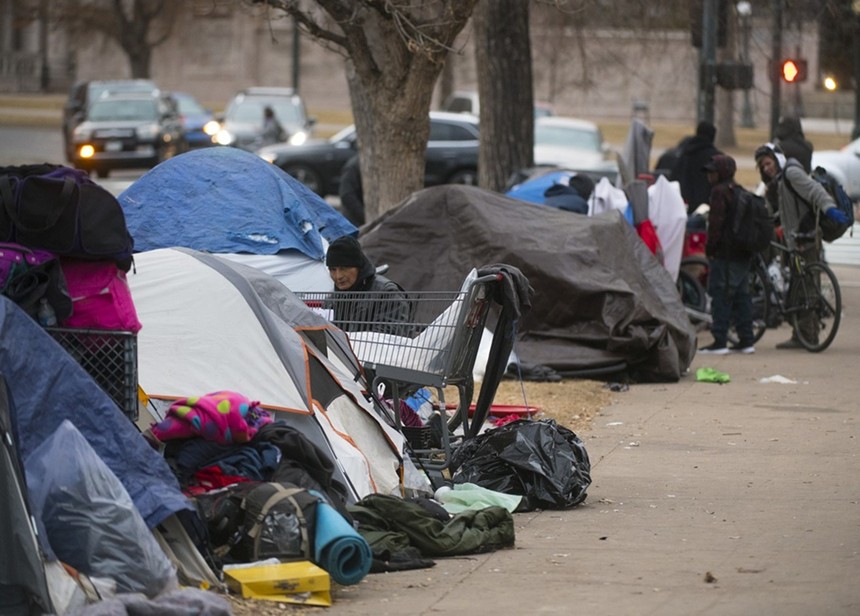 This encampment by the Colorado Capitol was swept in early 2020.
Evan Semon
The fact is, however, that no one ever intends to become homeless, and homelessness does not represent individual failure. The homelessness resulting from the Marshall fire was the confluence of longstanding drought in Colorado and wind speeds that topped 100 miles per hour. The residents of Boulder County will not — nor should they — be seen as failures because of their homelessness. Similarly, chronic homelessness is often the result of a confluence of systemic failures, not the failures of an individual. For example, at least one-third of people experiencing homelessness have a serious mental illness, most often schizophrenia or bipolar disorder, but the lack of an adequate mental-health treatment system in the U.S. left many people untreated. Furthermore, between 75 and 85 percent of people experiencing homelessness have a history of at least one adverse childhood event such as sexual violence or domestic abuse. Upwards of 40 percent of people experiencing homelessness suffer from drug or alcohol addiction — often brought on or exacerbated by untreated mental illness or childhood trauma. Finally, people of color have higher rates of homelessness than white people, which is likely attributable to higher unemployment rates, lower incomes, less access to health care and higher incarceration in these populations.

Just as no one ever intends to become homeless, no one deserves to be homeless, either. Stigma toward people experiencing homelessness is ingrained in the consciousness of many Americans. Many people view homelessness as a choice brought on by laziness and an individual’s unwillingness to “pull themselves up by the bootstraps.” It is, therefore, easier for most Americans to identify with someone who is newly homeless because of a natural disaster than someone who has been chronically homeless. But the latter group deserves a home and safety as much as the former. While a natural disaster destroyed the homes in Boulder County, systematic displacement and coordinated city-sanctioned police sweeps are routinely destroying the homes — even temporary ones — of people living on the streets across the U.S. Why, then, is it unacceptable for a natural disaster to destroy a person’s home and worldly belongings in suburban Boulder, but acceptable for the police to do it with dump trucks in a major metropolitan city?

While there may never be a comprehensive response to chronic homelessness that is on the scale of that to the Marshall fire, there are important, practical lessons to apply from the response to this natural disaster that can help improve the U.S.’s response to homelessness. First, treat the homelessness crisis like the emergency that it is. The federal government, along with individual state governments, must develop a coordinated response to homelessness that involves local jurisdictions, community-based organizations, private companies and individual citizens. FEMA funds must be made available for housing assistance programs, mental-health access and substance-use treatment. Second, mobilize community leaders. Many of the resource and monetary donations for the Marshall fire victims are being coordinated by community leaders and organizations. These same leaders must expand their efforts to include people experiencing chronic homelessness. The collective goal of the community is for every person to have access to safe and stable housing. Third, and most important, the nation must stop criminalizing homelessness. Displacement, coordinated sweeps and imprisonment are harmful and perpetuate the cycle of poverty and homelessness.

The Marshall fire profoundly affected my family and my community. I am deeply saddened for all of the families who are newly homeless because of the fire, and I hope they know that their community loves and supports them. I also hope that this disaster is a turning point in the U.S.’s response to the homelessness epidemic. It is clear from this disaster that the federal and state governments are capable of orchestrating a rapid, coordinated response to homelessness. It is also clear that the American people are capable of empathy, love and support for people experiencing homelessness. The country has a solid road map of what’s necessary to rise to the challenge of addressing homelessness. We must seize this opportunity to end this crisis.

Joshua Barocas M.D. is an associate professor of medicine and infectious diseases physician at the University of Colorado School of Medicine.

Westword frequently publishes opinion pieces and essays on the weekends on westword.com. Have one you'd like to submit? Send it to [email protected], where you can also comment on this piece.
KEEP WESTWORD FREE... Since we started Westword, it has been defined as the free, independent voice of Denver, and we'd like to keep it that way. With local media under siege, it's more important than ever for us to rally support behind funding our local journalism. You can help by participating in our "I Support" program, allowing us to keep offering readers access to our incisive coverage of local news, food and culture with no paywalls.
Make a one-time donation today for as little as $1.