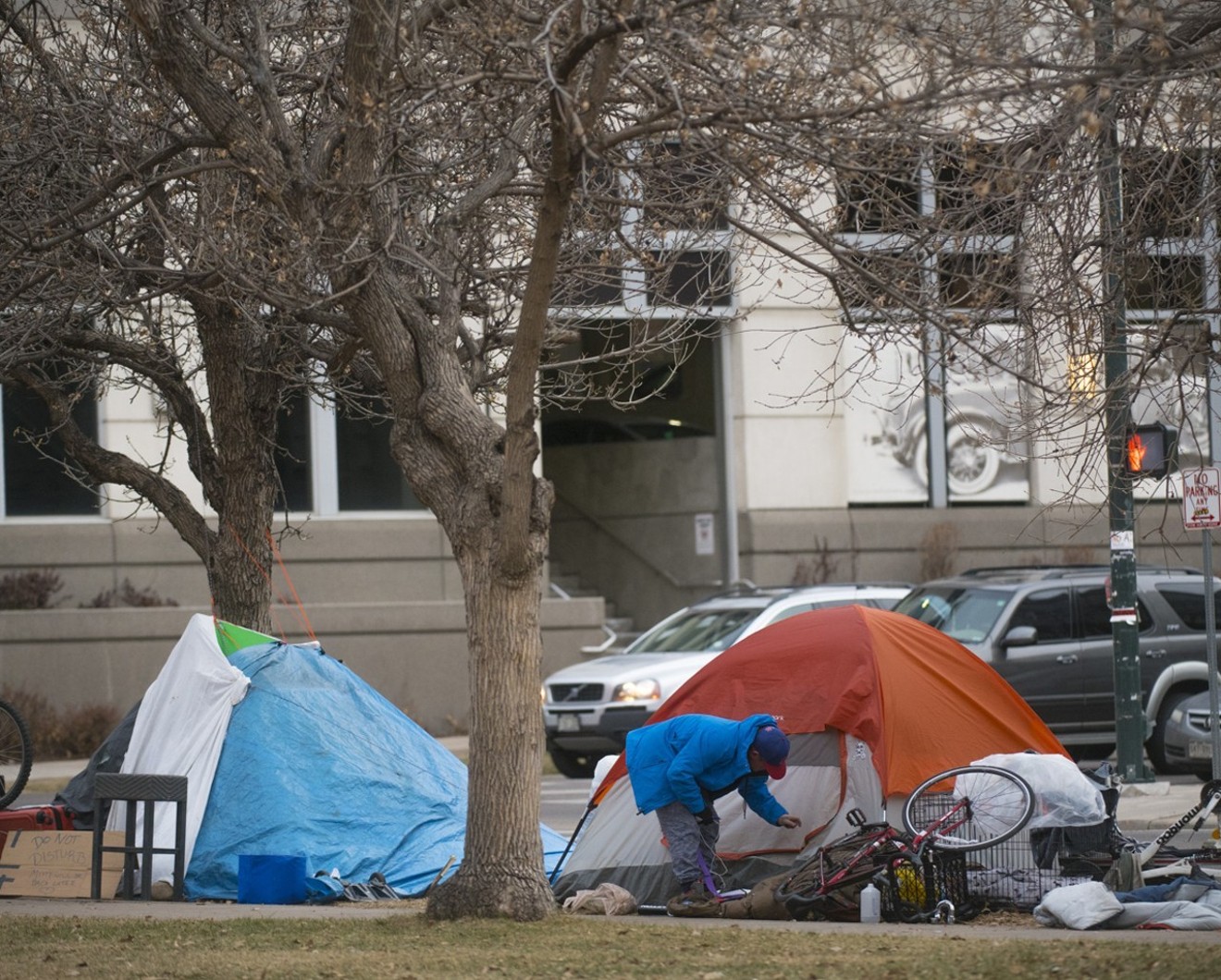 Homeless numbers are rising in Denver metro. Evan Semón
The number of people staying in metro Denver shelters who are homeless for the first time is way up, according to the 2021 Point in Time Count survey.

"In 2020 there were 1,273 people in shelter that were experiencing homelessness for the first time. This year, that number doubled to 2,530, demonstrating the devastating effects of COVID-19 on the stability of our neighbors,” Matt Meyer, executive director of the Metro Denver Homeless Initiative, says in a statement accompanying the August 25 release of some survey results.

MDHI conducted the Point in Time count, a survey performed annually in metro Denver, on a single night in February.

The 2021 Point in Time count indicated that the overall number of people staying in shelters in the metro area that night was up 40 percent from the previous year's count: 4,072 in 2021, compared to 2,911.

"It's alarming to see that level of increase, although I'm not sure we're entirely surprised," says Cathy Alderman of the Colorado Coalition for the Homeless.

There was another major shift over the year, however: During the pandemic, Denver moved to a largely 24/7 shelter model, making shelters more accessible.

“Unlike other parts of the country where shelter space was decreased during COVID-19, our community worked diligently to meet this challenge and stood up additional shelter spaces to help ensure the safety of those who needed it most,” Meyer explains in the statement. “We are incredibly grateful for the hard work and dedication of our providers in responding to increased need while crafting creative solutions to meet the demand for those experiencing homelessness.”

This year's survey did not count the number of people who stayed on the streets because of concerns over COVID-19 transmission in shelters. The 2020 count had tallied 1,561 people experiencing unsheltered homelessness in the metro region; many local service providers and government officials believe that number has gone up significantly during the pandemic.

"We know there are many more people sleeping outside than there ever have been before," Alderman says. "I think until we fully understand what those numbers are, it's going to be really hard for us to comprehend what the scale of the crisis is."

MDHI will release the full breakdown of the count in the fall, including detailed information about homelessness in the seven-county metro region of Denver, Adams, Arapahoe, Douglas, Jefferson, Broomfield and Boulder counties.

But on August 25, it released some specifics. In addition to the increase in first-time shelter users, the survey showedthat families seeking shelter had increased by 10 percent. At the same time, the results indicated that veteran-sheltered homelessness had decreased by 10 percent.

Jamie Rife, director of communications at MDHI, attributes the reduction in veteran homelessness to the Built for Zero program, which focuses on that group.

“We are getting to a point where we know all veterans by name and can work to meet their specific needs," Rife says. "And it’s working.”
KEEP WESTWORD FREE... Since we started Westword, it has been defined as the free, independent voice of Denver, and we'd like to keep it that way. With local media under siege, it's more important than ever for us to rally support behind funding our local journalism. You can help by participating in our "I Support" program, allowing us to keep offering readers access to our incisive coverage of local news, food and culture with no paywalls.
Make a one-time donation today for as little as $1.