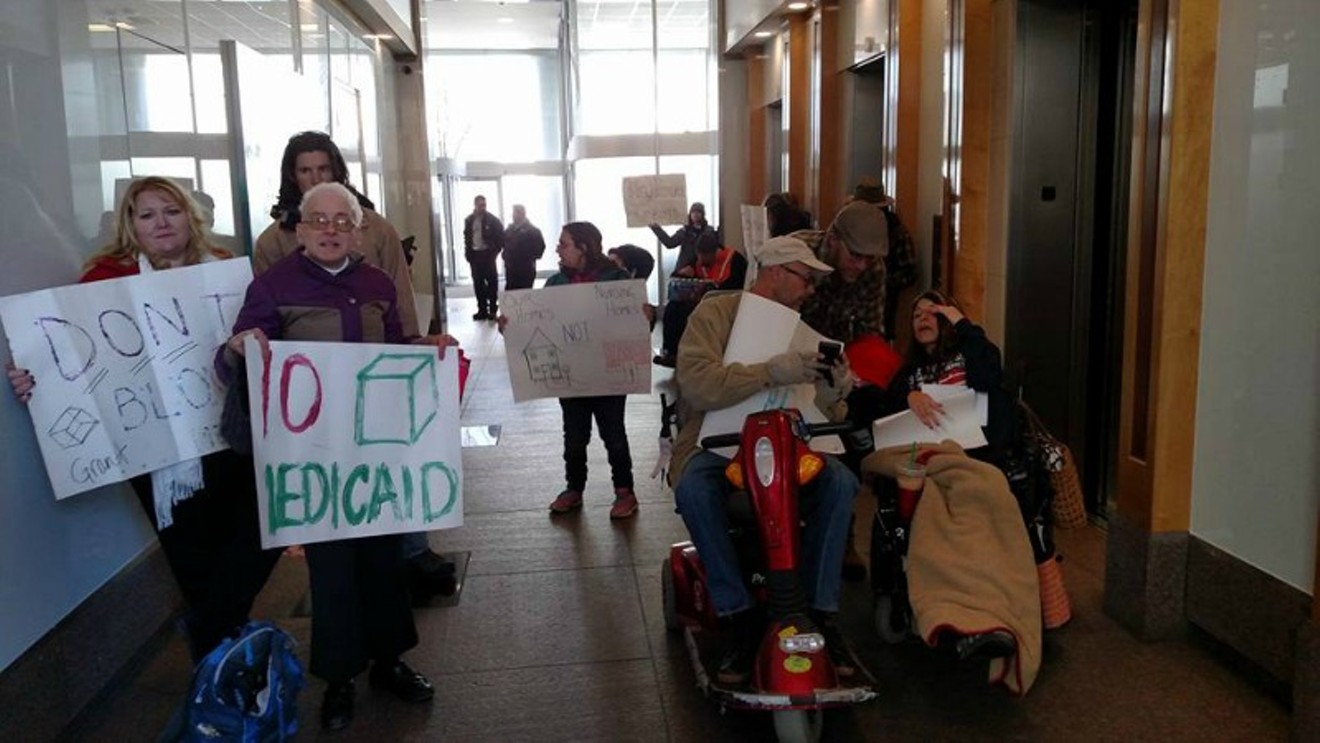 Disability-rights protesters who were cited for trespassing during a demonstration earlier this year. Photo courtesy of Jeff Hart
Update: The City of Denver hasn't dropped efforts to prosecute eighteen disability-rights activists cited for trespassing in a downtown Denver building that houses the office of Senator Cory Gardner, who was targeted because of his support for repealing the Affordable Care Act, popularly known as Obamacare. According to David Lane, who's been coordinating the activists' defense under the auspices of the Lawyers' Civil Rights Coalition, the first batch of cases is scheduled to be heard in court today, April 10.

As noted in our previous coverage, on view below, the demonstrators, many of them in wheelchairs, were ticketed by police on January 27 in the lobby of the Chase Bank building, 1125 17th Street. According to Lane, "The city is continuing with the prosecution. They have split the eighteen protesters up into three different courtrooms: six, six and six. I commented that it sounded satanic."

All of the cases have been set for further proceedings, Lane goes on, "and we will file a formal motion to dismiss based on our clients' First Amendment right to petition the government for redress of grievances despite corporate America's efforts to interfere with those rights by saying they can't be in the Chase Bank building, despite the fact that Cory Gardner's office is in the Chase Bank building."

When asked if Denver's decision to keep pursuing the protesters caught him off-guard, Lane replies, "My hope is always that the city will wake up and do the right thing, but it's never surprising when they don't. They're not just going to dismiss eighteen cases without a little bit of a fight. But once they see the law we're citing, I think they'll ultimately do the right thing."

The other demonstrators are also scheduled for hearings this month. Continue for our previous coverage.

Attorneys representing them under the auspices of the Lawyers' Civil Rights Coalition will call for the dismissal of the trespassing summonses they received, and LCRC co-creator David Lane isn't ruling out the possibility of future court action resulting from what he sees as an egregious constitutional infraction.

The protest took place on January 27 in the lobby of the Chase Bank building, at 1125 17th Street, and many of those cited for trespassing are disabled. Here's how Lane describes what went down.

Lane acknowledges that he's not sure if Hines personnel "were acting as a tool for Cory Gardner's office by blocking these protesters, or if they took it upon themselves. But at that point, the Denver Police Department came in and ordered these eighteen protesters to leave — and they would not leave. After that, there was much discussion about, 'Do we take them to jail or give them summonses?' And they decided to give them summonses." 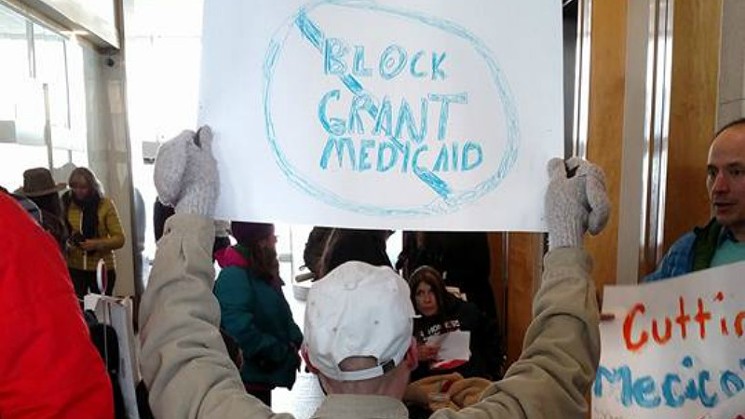 "This is a prime example of why we established the LCRC," Lane says. "Disability-rights lawyers communicated with criminal defense lawyers, so that each of these eighteen protesters has an individual lawyer through the coalition. And we will do our best to get these cases dismissed."

Just last month, Lane and company scored a victory in another protest-related matter, involving demonstrations against the Trump administration's refugee ban at Denver International Airport on January 28. A judge subsequently ruled in favor of an expedited permitting process at DIA.

No matter the outcome of the trespassing cases, the prospect of future court action remains. "We have to discuss all that, and it will be up to our clients," Lane stresses. "But I am all in favor of fighting against the clamp-down. We have a zero-tolerance policy for civil-rights violations at the LCRC, and it's better to go on offense than to be on defense. And the bottom line is, if corporate America wants to rent space to the government, they're going to have to accommodate all the constitutional inconveniences visited upon them."

In the meantime, Lane is confident that the eighteen protesters in question won't be silenced when it comes to speaking out against repealing and replacing the Affordable Care Act.

"They know they could end up in jail by doing it," he says. "It takes great courage to do this. But these people are very courageous."