Here's How to Help the New Migrant Arrivals in Denver The City of Denver is hosting over 100 recently-arrived migrants at an emergency shelter. City of Denver
With an estimated 300 migrants arriving in Denver over the past two months — including about ninety who showed up at Union Station one night earlier this week — city officials are scrambling to pull together resources to take care of them.

"It is not completely unanticipated. We have been planning and preparing for this for the last few months. But it is definitely an added strain," Evan Dreyer, deputy chief of staff for Mayor Michael Hancock, said during a December 8 press conference in the Emergency Operations Center in the basement of the City and County Building.

According to Dreyer, as of that morning the city was hosting 120 migrants at an emergency shelter that it had set up in a local recreation center. They hail from Central and South America, with many of the newest arrivals coming from Venezuela.

While some Republican governors, such as Greg Abbott of Texas and Ron DeSantis of Florida, have sent migrants to liberal enclaves in other states as political stunts, there's no evidence that that's what happened in this case, Dreyer said.

"This does not appear to be anything that was organized by another government or entity to direct people to Denver," Dreyer said, noting that some of the migrants may have organized trips to Denver from border states over Facebook.

Dreyer added that Denver officials don't know a lot about what to expect next. Migrants have still been trickling into the city over the last few days, with about twenty to thirty arriving daily. "We’re in a little bit of an information vacuum," he said.

Even so, it's clear that the various city entities and nonprofits serving the recently arrived migrants need help. Here's how Denverites can pitch in.

The City of Denver has immediate sheltering and housing needs.

"Part of what we want to do today is put a call out to faith-based, nonprofit and non-governmental community as well," Dreyer said. "Moving forward, we anticipate we will need their assistance in providing housing and shelter to folks."

Some of the migrants have already been staying at the Denver Rescue Mission.

"In the last two weeks, there have been migrants who have used our services, for sure, but nothing that would be called more unique than normal. This situation, in the last 48 hours, could certainly be described as something extremely unique in Denver Rescue Mission services," Stephen Hinkel, a spokesperson for DRM, told Westword on December 7. "We will house anybody who wants to use our services."

But the DRM ran out of space, which is why the city needed to open an emergency shelter.

Now Denver wants leaders of the types of organizations that could provide sheltering or housing support to use the Denver Office of Emergency Management website to get in touch with the city. 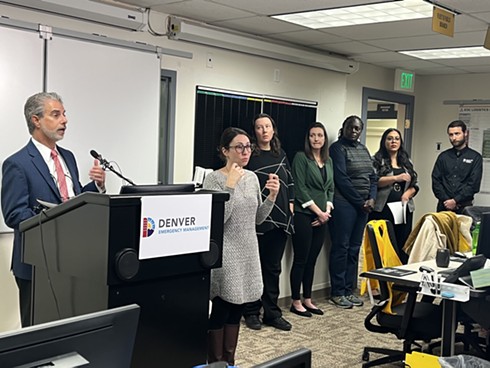 This website also includes links for people to make financial donations. Some of the organizations helping out in providing services to the recently arrived migrants are the Denver Community Church, the American Friends Service Committee and the Colorado Hosting Asylum Network. All of these organizations are linked on the OEM website.

"Community members who are interested in volunteering, we are grateful for the support and help," Dreyer said.

Given that many of the migrants will likely be applying for asylum in the United States, they'll need legal assistance to navigate the byzantine immigration legal system.

Since 2018, immigrants living in Denver who are adjudicating their immigration cases have been able to access the Denver Immigrant Legal Services Fund to help with funding.

"For individuals who are going to be relocating to Denver, that's a service that will be available to them," said Atim Otii, director of the Denver Office of Immigrant and Refugee Affairs.

The City of Denver provides much of the money for this fund, earmarking $750,000 for it in 2022. The fund itself is housed within the Denver Foundation.

But given how many of the recent migrants may be applying for asylum — and the fact that there are tens of thousands of immigrants already in Denver who are involved in cases  — the fund may need a boost.

"We're always asking for donations to the fund," Otii said, noting that the city and its partners will soon be informing those staying in the emergency shelter about this opportunity. "Those services will be available, and we have a very robust immigration attorney network in Denver and Colorado."

Donations to the fund can be made here.
KEEP WESTWORD FREE... Since we started Westword, it has been defined as the free, independent voice of Denver, and we'd like to keep it that way. With local media under siege, it's more important than ever for us to rally support behind funding our local journalism. You can help by participating in our "I Support" program, allowing us to keep offering readers access to our incisive coverage of local news, food and culture with no paywalls.
Make a one-time donation today for as little as $1.