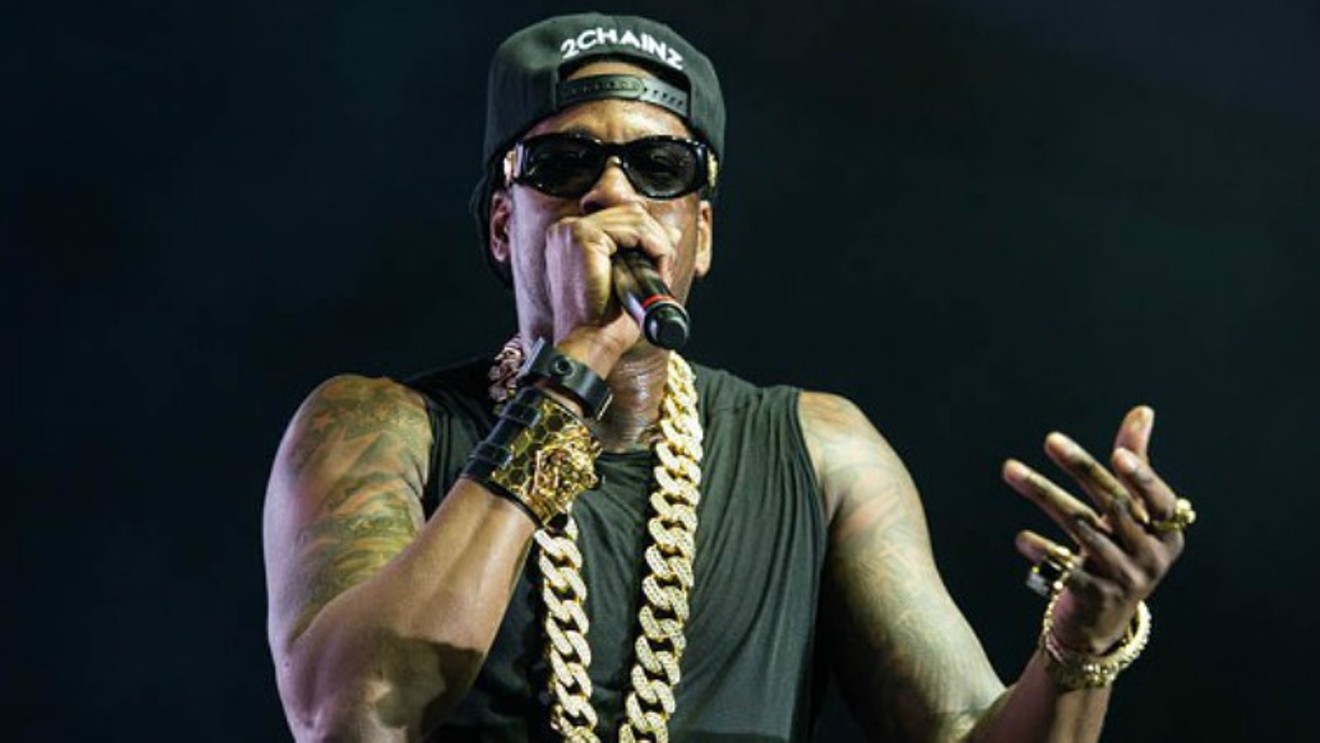 2 Chainz is the headliner for the 4/20 rally at Civic Center Park. Timothy Norris for LA Weekly
Following a 2016 event that was postponed because of a snowstorm and finally staged a month later, the 2017 Denver 4/20 Rally is scheduled to take place on the actual date of April 20 for the first time in four years. That means it should happen on a Thursday instead of a weekend, but this timing hasn't caused promoter Santino Walter of Civic Center Park Productions to lower his expectations for the gathering, which is centered around a free concert headlined by 2 Chainz.

"I think it's going to be huge," Walter says. "Denver is still the biggest destination to travel to and legally buy and consume retail cannabis for 4/20. You can see it in the way the hotels are already booked out, the cost of flights out here, how flights are booked up, the amount of superstar celebrities who will be in our city the four or five days of 4/20 weekend. So I think we're probably going to have the largest event we've ever had."

When he's asked if there were any lessons learned from last year's postponement, Walter is adamant: "No. That is a major misconception." Granted, the ultra-late postponement of the 2016 rally stirred controversy, and Walter says decisions about any possible weather-related delays will be made at least 24 hours in advance going forward. But otherwise, he sees the way things worked out as having been "a gift from God."

How so? If the event, headlined by Wiz Khalifa and Lil Wayne, had gone on in the teeth of the storm, "the park would have been trashed, it would have been destroyed," Walter maintains. "The grass, with all those people on it — they would have annihilated Civic Center Park. And you would have had all the electrical cables and then two rappers on stage. Life or death: That wouldn't have been safe." 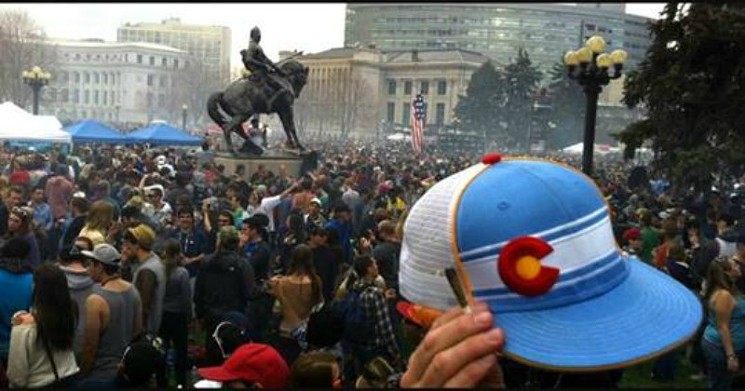 Denver 4/20 Rally Facebook page
After the postponement, Walter continues, "the City of Denver — and this is the gift-from-God part — allowed us to produce the event a month later at no additional cost. They allowed our $50,000 permit to transfer thirty days later to when the weather was acceptable. So thank you, City of Denver. And Lil Wayne's manager, when I told him what was going on, he responded back to me in ten minutes, and he got Lil Wayne to confirm that he'd perform at the rescheduled date. And he didn't have to: In their contracts, Lil Wayne and Wiz Khalifa, who had already collected their $300,000, did not have to perform if the weather canceled it. So thank you, Wiz Khalifa's manager, and thank you, Lil Wayne's manager, for allowing them for no additional money to come and still do a performance for everybody — even if it was thirty days later," on May 21.

This time around, there's a single headliner, 2 Chainz. But Walter notes that he'll be joined by "six to eight local hip-hop artists from different parts of Colorado: Denver, parts of Montbello, all over the map. We strategically picked people who will represent Colorado well."

The one local rapper Walter names is Trev Rich, who released an album on Cash Money Records last year. "He's a friend of the family," he points out, "and we really wanted to get behind the talent here in Colorado. A lot of time, the talent doesn't get a chance to be a part of a production that costs $800,000" — the budget for the 2017 rally.

Numerous DJs will be working the early shift. "Music's going to be playing all day, because we'll have speakers set up throughout the park," Walter says. "We'll have DJs playing from 10 a.m. to 2 p.m., so there will be music everywhere." Then, at 2 p.m., performers will take the stage, with 2 Chainz leading the 4/20 countdown.

Denver 4/20 Rally Facebook page
As for other attractions, Walter reveals that "right now we're at 250 confirmed vendors, the most vendors we've ever had. We have businesses coming from eleven different states, and we have a ton of Denver local businesses. We actually gave a local discount to anybody within a two-mile radius of Civic Center Park. And we're also giving away twenty nonprofit spaces. We're calling it 'twenty for 4/20.' We have a whole lineup of causes that we believe in, nonprofits that are going to be throughout the park, as well."

Denver's prohibition against public marijuana consumption presents an annual challenge to Walter when it comes to the 4/20 rally, but he doesn't rail against the restrictions. "We're extremely consistent in the conversations we have with Denver on an annual basis," he allows. "We meet three to four times before the event takes place with the mayor's office and everybody involved with that. The message is going to be the exact same it's been in the past for the years I've been producing the event: We'll let the attendees know what is legal and what is not legal to do. Nothing changes as far as our event's concerned."

He feels the size of the crowd watching the spectacle could grow in part because some high-profile events have disappeared — most prominently the High Times Cannabis Cup, which moved to California in 2016.

"High Times wasn't around last year, and if anything, I think that made it easier for our event," Walter says. "The problem we always saw with High Times is that they threw such a non-compliant event that made no sense with what's allowed and what isn't allowed in the state of Colorado. With them gone, not only does it create a greater focus on our event, which is the largest 4/20 event in the nation based on attendance over the last four or five years, but it allows people to see it as more of a festival and a concert rather than a place to get free weed. We aren't giving away any weed, like High Times essentially was. And that allows people to understand that basically, we're just throwing a big concert in the park."

Walter resists the urge to float a predicted attendance figure. But he's definitely optimistic: "I'll say this: We've annually done about 50,000 people, and I expect us to do a little bit better."