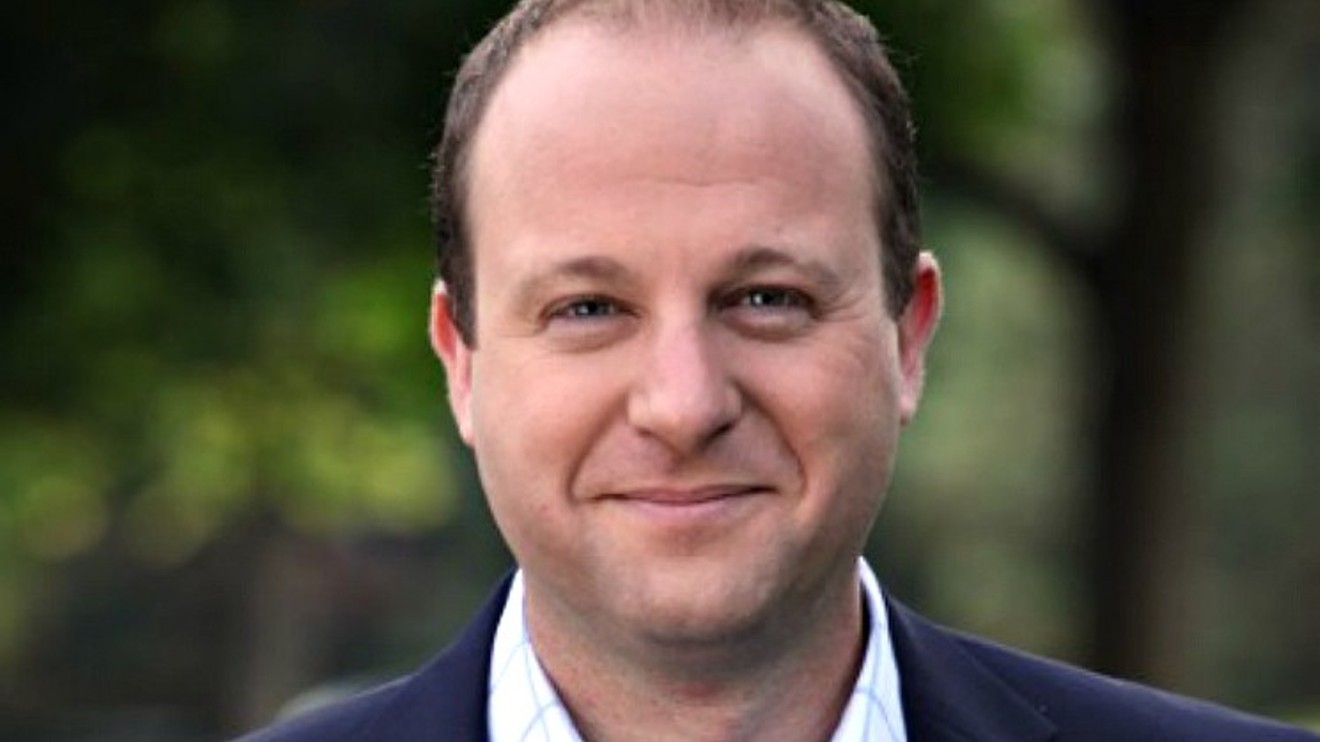 Jared Polis is the Democratic nominee for Colorado governor. File photo
The surfacing of a 1999 police report involving Representative Jared Polis, the Democratic nominee for Colorado governor, quickly swirled into a tornado of spin from supporters of his Republican gubernatorial opponent, state treasurer Walker Stapleton, as well as from the congressman's own campaign.

Meanwhile, media organizations of various stripes tripped all over themselves while reporting about the incident, even as the Republican Governors Association maintained that Polis had "violently assaulted" a female employee.

But the report, accessible below, as well as other documents in the public record, reveal that the only person charged with a crime in the incident was the female employee, the late Patricia Hughes, whom Polis held for Boulder Police Department officers (he had called them) because she'd stolen documents either before or after she resigned in response to accusations that she'd used his credit card for her own financial benefit. She later pleaded guilty to theft, and the judge in her case mandated that she undergo mental health treatment.

"According to the court records," says Catherine Olguin, spokeswoman for the Boulder County District Attorney's Office, which declined to prosecute Polis in connection with the incident, "he was the victim. She was ordered to stay away from him, among other conditions of her sentence."

The incident came to light mid-afternoon on Tuesday, September 25, as a result of "Police Report: Polis Pushed Female Employee," an article in the conservative-listing Washington Free Beacon penned by Todd Shepherd, a former KOA reporter and co-founder of the Complete Colorado website, who relocated from Denver to the nation's capital in late 2016.

Shepherd is a strong reporter who's done plenty of good work in the past. But he's also a proud conservative, and his latest piece, subtitled "Polis 'Put Both of His Hands on Her Shoulders and Pushed Her Back,'" omits some material and downplays other matters in an effort to maximize its partisan political impact.

Complete Colorado co-founder Todd Shepherd wrote the first story about the 1999 incident.
File photo
The Free Beacon item notes that the incident in question took place on June 23, 1999, at the offices of a company dubbed JPS International LLC. The firm's initials refer to Polis's birth name, Jared Polis Schutz. He later had his name legally changed to remove "Schutz" in honor of his mother's maiden name, he's said — although this morning, KNUS talk-show host Peter Boyles and other outfits have been floating the highly dubious theory that he actually dropped the moniker to hide this incident.

At that point, Shepherd cherry-picks excerpts from the report based on Hughes's account of what happened: "After hanging up with the dispatcher, Ms. Hughes attempted to leave the office. Mr. Schutz physically blocked the door to prevent her from leaving. She moved toward him again, this time hitting him with one of her bags. Mr. Schutz then put both of his hands on her shoulders and pushed her back to prevent her from leaving... . Hughes then tried to leave and Schutz did not let her leave. Hughes said that he grabbed her and pushed her back into the office. Hughes said that when Schutz pushed her, she was pushed back into a file cabinet, hurting her leg. Hughes said that she then said that she was going to call 911 and went to the phone. Hughes said that she tried calling 911 three times and twice Schutz hung the phone up. The third time Hughes got through."

Also noted are these remarks from the officer who wrote the report's narrative: "I did observe two bruise marks on Ms. Hughes left inside bicep and a red welt on her thigh. She stated that the bruises on her arms were from Mr. Schutz ‘grabbing' her with his right hand." But the officer added, "The bruises were not conducive with Mr. Schutz's statement that he pushed her shoulders. Nor were they conducive with Ms. Hughes's statement of Mr. Schutz standing in front of her and grabbing her."

Another detail: "The welt on her thigh she said was from Mr. Schutz pushing her back when she attempted to leave. The welt was conducive with the a (sic) file cabinet in front of the door. There was also a key protruding from the upper right hand corner of the cabinet that could have produced the welt."

Granted, Shepherd does mention that the officers found files belonging to JPS International in the bag that Hughes had used to hit Polis. But he leaves out any mention of Hughes's own criminal culpability.

"In 1999, Patricia Hughes was issued a summons for theft of trade secrets," Olguin confirms. "She was ordered to appear in court at a certain time, and shortly after that period, she pleaded guilty to the count as charged and was sentenced. ... She was placed on an unsupervised deferred sentence of eighteen months. The conditions were she was not to have contact with the victim [Polis], she was to return the property, and she was to continue mental health treatment."

State treasurer Walker Stapleton is the Republican choice for Colorado governor.
Facebook
That Hughes was ordered to steer clear of Polis seemingly contradicts the granting of a temporary restraining order against him, put in place at her request — something Shepherd does find room to cite. Also noted is the fact that the restraining order wasn't made permanent, for reasons Olguin explains.

One factor in that dismissal was likely Polis's written reply to the citation, filed on June 29, 1999; Shepherd doesn't refer to it in his salvo. According to that document, Polis had learned that Hughes had been using his personal credit card to transfer cash advances to her personal bank account. He asked Hughes to return the money, he said, but she refused to do so and then gave her two-week notice via email. Hughes reportedly told Polis not to tell her mortgage banker that she was no longer working for him, threatening that she had "copies of everything."

On June 23, 1999, Polis's reply continues, he arrived at his office to find Hughes deleting files from a company computer — and she'd filled several bags with physical files, too. Police also discovered that she still had several company keys in her possession after she'd insisted otherwise. Moreover, Polis said he was the one who'd called the cops and prevented Hughes from leaving so that they could arrest her. Hence the aforementioned summons.

Olguin points out that Hughes, who died in 2014, "successfully completed her probation, and the case was dismissed in April of 2001. But I did find two or three other criminal cases afterward — a couple of fraud cases and a theft case."

Given that none of this material made it into the Free Beacon report, it's no surprise that it was skipped over by the Daily Caller, another conservative publication that followed Shepherd's piece. And the Republican Governor's Association delved into the realm of fiction with a release maintaining that the police report had "detailed how, in 1999, Colorado Democrat gubernatorial nominee Jared Polis violently assaulted a female employee, leaving bruises and preventing her from calling 911 for help." An RGA operative also ambushed Polis outside the U.S. Capitol about the claims late yesterday, resulting in this awkward video, which had racked up 123 YouTube views as of 5:30 a.m. today.


Rather than immediately going public with information refuting the conclusions of the Free Beacon report, the Polis campaign forces got busy behind the scenes trying to make the whole matter go away — and they appear to have briefly succeeded with Fox31, which published an item based on the police report before pulling it down and substituting a snippet barely longer than the editor's note accompanying it.

Not much better was a Colorado Public Radio effort, which primarily recapped the police report. But CPR did include the same statement from Polis for Colorado campaign chair Lisa Kaufmann that was provided to Westword: "Jared Polis was the victim of a crime, was the person who called the police, and was found to have done nothing wrong. Shame on Walker Stapleton for trying to exploit that."

Indeed, the Stapleton campaign statement provided to CPR echoes the RGA's disingenuousness: "Violence against women is never acceptable, and Jared Polis needs to take responsibility for his actions."

By the way, Stapleton, who recently branded Westword a "phony" news organization before lamely retracting the remark, has only communicated with us once in recent months, when he told editor Patricia Calhoun that he doesn't give "extemporaneous interviews" before running away from her like a frightened child at a public event last month.

That leaves Boulder DA's office rep Olguin to put the whole mess into context. "The court record speaks for itself," she says. "What happened in court is a public record. It's there for anyone to look at. And If you try to characterize it as anything other than the events as they occurred and the time in which they occurred, you would be mistaking what's in the public record."

Click to access the 1999 Jared Polis-Patricia Hughes police report.
KEEP WESTWORD FREE... Since we started Westword, it has been defined as the free, independent voice of Denver, and we'd like to keep it that way. With local media under siege, it's more important than ever for us to rally support behind funding our local journalism. You can help by participating in our "I Support" program, allowing us to keep offering readers access to our incisive coverage of local news, food and culture with no paywalls.
Make a one-time donation today for as little as $1.