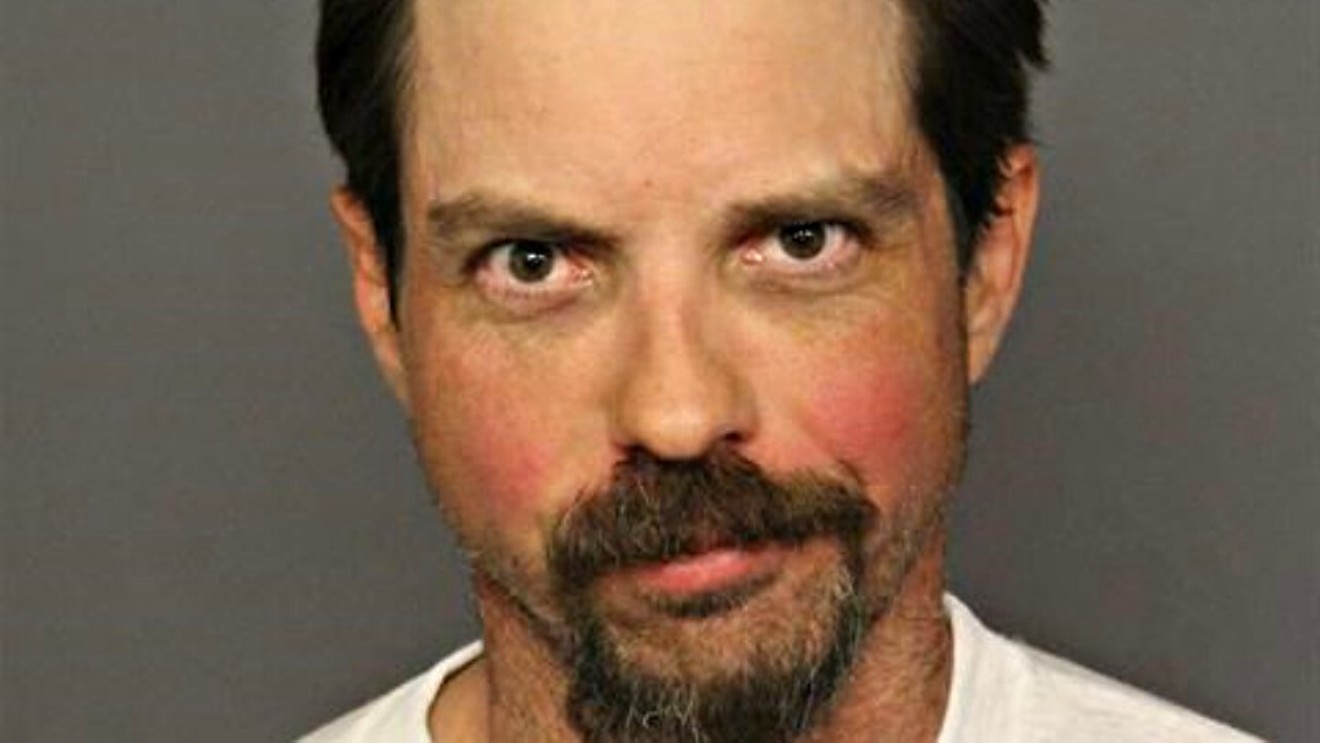 Terry Dunford's booking photo. Denver Police Department
Update: The Denver District Attorney's Office has formally charged Terry Dunford with first-degree murder. He's due for his first court appearance at 8:30 a.m. on Thursday, February 22. In the meantime, Dunford is being held without bond. Continue for our previous coverage.

Original post: Last week, the body of Jeanna Leslie was found in her downtown Denver apartment. The former San Antonio, Texas, schoolteacher, who'd moved to Colorado mere months earlier and quickly fallen in love with the Mile High City, had been stabbed to death. Now, Terry Dunford, described as a homeless man she'd been trying to help, has been arrested for her slaying, and according to an arrest affidavit accessible below, he made investigators' job easy by leaving behind a staggering number of clues to his identity.

At about 7:20 p.m. on Tuesday, February 13, the affidavit notes, Denver's 911 dispatch center received a call from Leslie's former husband, who said he had not heard from her in over a week, since she was supposed to pick up their children from a Nuggets basketball game but had not appeared.

At 11:29 that night, officers headed to the Rio Grande Lofts, at 1531 Stout Street, on a welfare check. They found the door to Leslie's unit, number 306, locked, so they forced entrance — and once inside, the cops, accompanied by personnel from the Denver Fire Department, noticed "the overwhelming smell of decomposition," the report states.

The responders found bloody clothing and bloodstains on carpeting and the walls near the door. Leslie was in the bathroom, naked from the waist down and suffering from multiple stab wounds. She was declared dead at 1:10 a.m. on February 14 — Valentine's Day. 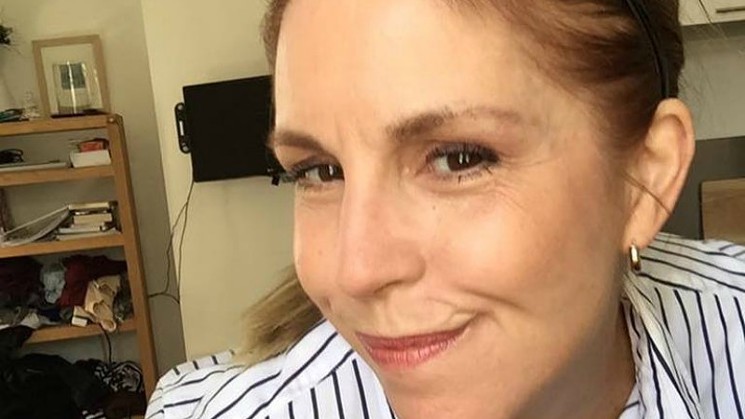 A Facebook portrait of Jeanna Leslie.
Facebook
A search warrant was promptly obtained, the narrative continues, and among the items found were multiple knives, a number of which appeared to have been marked by blood.

Also located were a cardboard carrier for a six-pack of Corona and a receipt from Champa Fine Wine & Liquor, whose importance would be demonstrated soon, as well as a pair of tan, green and black camouflage cargo pants and a large, light-tan sweatshirt with a fish logo on it. Both garments were bloodied.

Even more information was found on a sliver laptop — specifically a custody report from the Wheat Ridge Police Department for Dunford.

And within a shopping bag, officers spotted a wallet containing a Department of Veterans Affairs ID, a Denver Rescue Mission card and a Hawaii driver's license, all in Dunford's name. 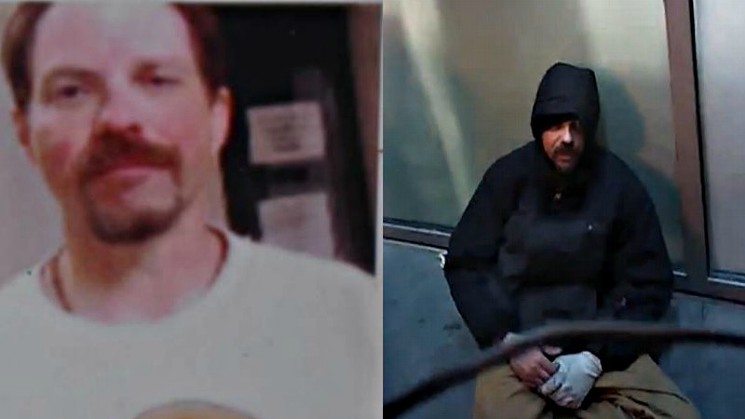 Images of Terry Dunford issued by the Denver Police Department prior to his capture.
Denver Police Department
The aforementioned liquor-store receipt was dated February 7, and when a detective checked surveillance footage at the store, he saw images of Leslie and a man who resembled Dunford purchasing the Coronas.

At that point in the report, an entire paragraph is blacked out — fairly unusual in an affidavit released shortly after an arrest. But plenty of additional details are visible, including confirmation that one of Dunford's fingerprints was found on a butter knife in the apartment — and he also popped up on images from a camera mounted across the hall from Leslie's apartment.

As for how Leslie had come into contact with Dunford, reports suggest that she was allowing him and another homeless man to stay at her place in an effort to assist them in moving forward with their lives.

She didn't mention either man on Facebook, where she documented her move to Denver, though one post exulted that "I just got offered the best job on 16th Street!" — an area where members of the local homeless community have been known to congregate. 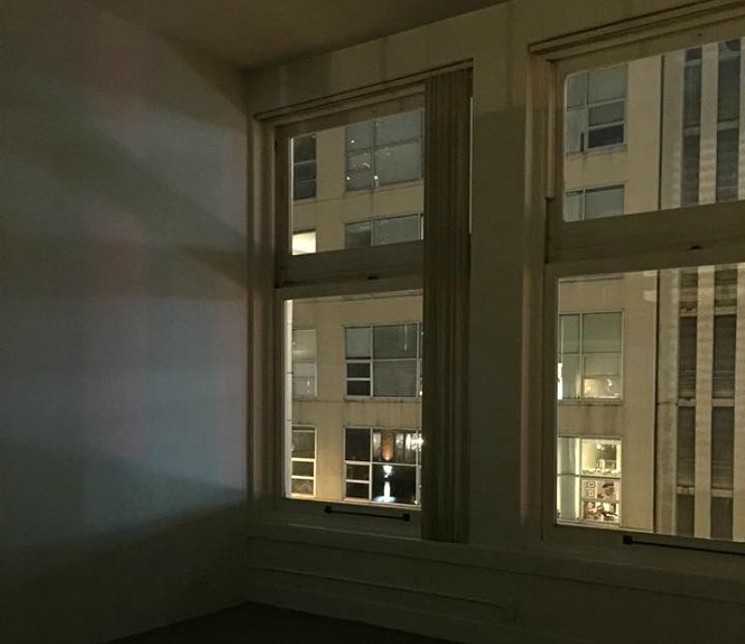 An image of Jeanna Leslie's apartment that she shared on Facebook.
Facebook
In the meantime, Leslie's four children have launched a GoFundMe page her memory. Its introduction speaks volumes:

Jeanna Leslie's life was taken by a relentless act of violence on February 14th at age 49. Born in California, Jeanna moved to Texas to raise her four kids and teach high-school English at Harmony Science Academy-San Antonio. She was a free-spirited and loving mother who was filled with adventure.

Us four kids are looking to fund her funeral and burial next to her grandpa at Fairhaven Santa Ana Cemetery on March 3rd.

Here are some words from her former students…

"I always wanted to be a writer, similar to Edgar Allan Poe. A few teachers helped me become a better writer, and she was one of them. Even after I had her for a teacher, I was writing a novel and ask if she could help me edit it, which she kindly did. Not only was she a great teacher, but a good friend and I loved spending time with her, and her class did change the course of my life. I wanted to try acting again, but I wasn't sure if I was going to like it. We performed Romeo & Juliet and she let me be Juliet, which is where I first got the spark to make me say "I want to be an actor." Without that spark, I probably won't be where I am right now or would have found out about my love for theatre much later in life. Thank you, Ms. Leslie, I'm going to miss you. RIP." — Melissa Wale 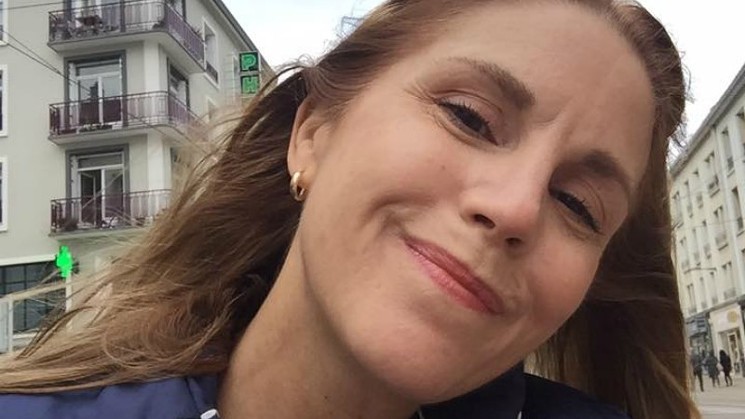 Another look at Jeanna Leslie.
Facebook
"One of my favorite teachers from hsa has been taken too early. Ms. Leslie will always have a place in my heart. She made English more fun than it ever could be. She was so full of energy and love you just couldn't help but love her. My heart goes out to her family and I hope they find peace in these difficult times." — Kami Hernandez

"Those of you that knew where I went to school know that it was a small close group. Ms.Leslie was such a high spirited person and I enjoyed having her as my teacher for three years. It makes my heart ache knowing you were starting your new life in Denver only for it to end there. I am content knowing that you at least got to see the world and travel with your kids." — Alejandra Ashlyn C

We Love You Mom.