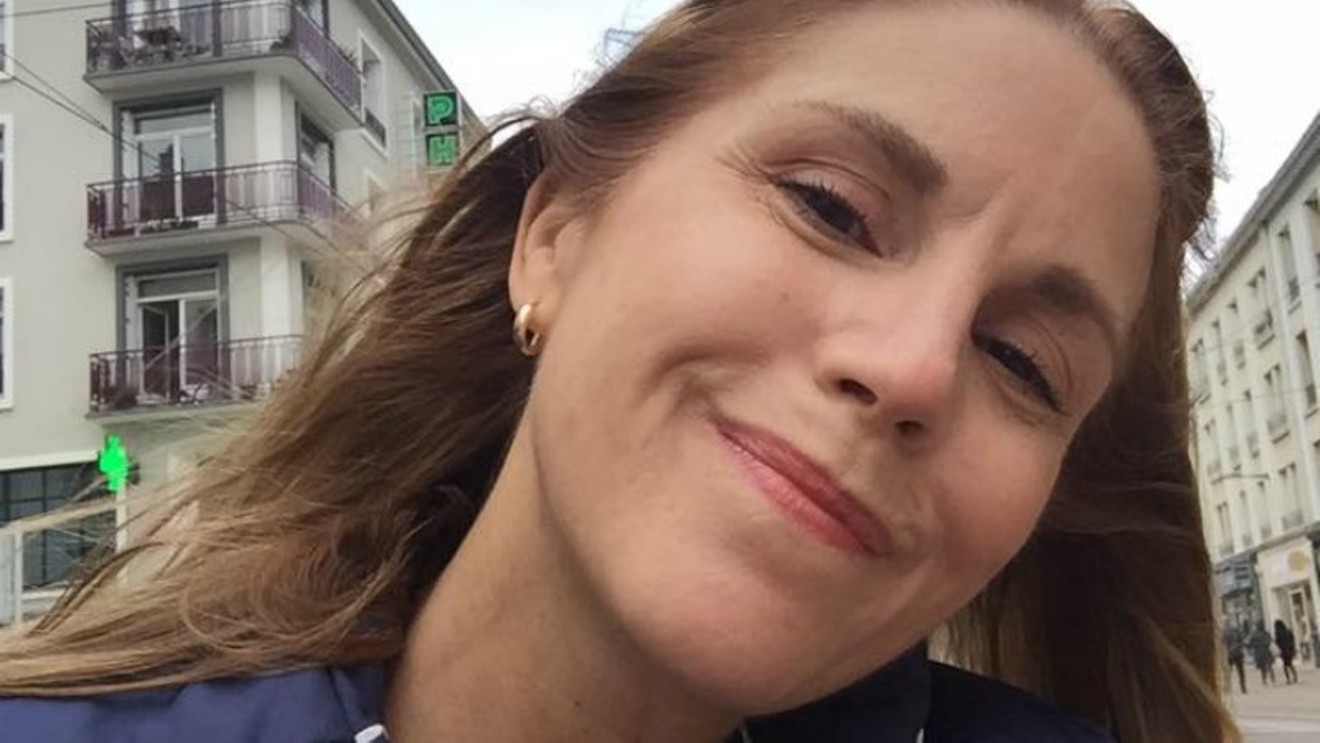 A portrait of the late Jeanna Leslie. Facebook
Editor's note: An arrest has been made in the murder of Jeanna Leslie. Read more about it in "Jeanna Leslie Tried to Aid Terry Dunford, Homeless Man Busted for Killing Her." Continue for our previous coverage.

Jeanna Leslie, 49, was a vibrant free spirit who recently moved from Texas to Denver and quickly fell in love with the community, as she documented in words and photos on her Facebook page. But her obvious joy and excitement over moving into a downtown apartment and starting a new adventure now echoes with poignancy. The page has become a heartbreaking memorial to Leslie, who was stabbed to death in her Mile High City home.

At this writing, no one has been charged with taking Leslie's life.

At 6:54 a.m. on the morning of Valentine's Day, February 14, the Denver Police Department tweeted, "ALERT: #DPD is conducting a homicide investigation in the 1500 block of Stout St. Officers discovered a deceased adult female in a residence while responding on a requested welfare check. No arrest or suspect information at this time."

The following day, the Denver Office of the Medical Examiner identified the victim as Leslie. She was pronounced dead at the scene. An autopsy revealed that she died from multiple sharp-force injuries. The release adds, "The manner of death is homicide."

The contrast between this tragic ending and the Leslie who emerges on Facebook (where she was identified as Jeanna Berg-Leslie) could not be more stark. Take her account of a trip last year to Europe, during which she was accompanied by a charming angel figurine.

Jeanna Leslie's angel.
Facebook
"There is a really cool story about this little angel," Leslie wrote in a post from September. "When I left San Antonio on May 13, 2017, at 4 AM in the morning to return my rental car at the airport and start my European journey, I unfortunately realized that I still had a bunch of stuff that didn't make it to my storage unit. Everything had to go in the trash. My coffee maker, vacuum, and a bunch of other stuff were dumped in a trash bin that I found just outside my hotel room. But, this little angel wasn't going anywhere except with me on all my adventures."

She added: "Brest, France, is the end of the European tour for now because I miss NFL football, working, movies, HEB, Freetails, SA Living, Austin, Stonewerks, my friends, (okay, I'll stop), so it is time to say goodbye."

Nonetheless, she stressed that "my perfect little angel fit in so well with this Airbnb here in Brest, France, with her golden halo and angelic features matching with the gold and white little trees. What does it mean? I don't know, but I will be back to Europe, and especially France, because this country embodies the human spirit. Actually, everywhere I have traveled people are super cool, but the over the top recognition of art will always win my heart."

By early November, following more travel (her stops included Boston and Disney World), Leslie was ready to move on. In a post that included this photo....

A photo shared by Jeanna Leslie shortly before she left San Antonio.
Facebook
...she wrote, "Goodbye San Antonio for now!!!! Greatest city ever! I will be back! So far, nothing can compare!"

The location stamp for this post was Denver, and Leslie kept her Facebook friends up to date on her early days here.

On November 10, for example, she shared a photo of a certain big blue bear.

Her accompanying text reveals: "This is the view from my Airbnb here in Denver! And that is a really cool, huge blue bear looking into to the Denver Convention Center. So, I bought the perfect car ever (AWD), and I just got offered the best job on 16th Street!"

The view from the Airbnb where Jeanna Leslie stayed after relocating to Denver.
Facebook
By month's end, an update suggests that Leslie hard fallen hard for the city.

"Denver has a unique culture that combines majestic realism with the myth of the untamed West," she maintained. "It is as beautiful as the people. With change comes growth, and Denver will change anyone for the better."

She accented these observations with a quote from Leonardo da Vinci: "Iron rusts from disuse; stagnant water loses its purity; even so does inaction sap the vigor of the mind."

The following week, Leslie was settling in — and not sure how she felt about it.

"I sadly say that I am no longer a nomad," she stated. "I just bought a car, got a job, and signed a lease, so I am a bona fide cog in the wheel. But my new apartment is really cool."

This is one of the many photos of the apartment Leslie posted. She deemed the place "decorator heaven!"

A photo from inside Jeanna Leslie's apartment before she made it her own.
Facebook
Last month, in what would prove to be her final post, Leslie created a mini-gallery of photos from all around Denver, including the horse on the red chair outside the Denver Art Museum.

In her words, "Denver is a mix of Californians, Denverites (oops if I got that wrong), and plenty of international tourists stopping by Denver on their way to Aspen...Vail...Breckinridge...."

Since then, a slew of additional items have popped up on the page, but their authors are Leslie's friends and family members, who are clearly struggling to come to terms with her voice being silenced.


Murdered. Unbelievable! Such a sweet person. She just got back from the most amazing tour of Europe. Esperanza class of 86. #EHS

I am in such disbelief. Just found out that my English Teacher from high school was killed today in a senseless act. Those of you that knew where I went to school know that it was a small close group. Ms.Leslie was such a high spirited person and I enjoyed having her as my teacher for three years. It makes my heart ache knowing you were starting your new life in Denver only for it to end there. I am content knowing that you at least got to see the world and travel with your kids. You will be missed dearly, life is too short. I will be praying for your kids.

So much sorrow today, just sick to my stomach. I found out that my friend, a good hearted, sweet and all around genuine person, Jeanna Berg-Leslie whom I knew well was murdered last night in her apartment.... I know you’re in a safe place now. RIP Jeanna....

I am so deeply saddened by this today.i am so grateful for the time I got to spend with her here in Texas and teenage years. So lovely... As always.. so many memories since middle school. So very sad .. I am heart broken. Feeling so much for her lovely children. Rip Jeanna Berg- Leslie dear. Til we meet again!

Unbelievable...My classmate and friend Jeanna Berg-Leslie was apparently murdered in her apartment in Denver. Jeanna had such an adventurous spirit. She had encouraged me through some hard times. I just can't believe this!! So beside myself. ..what the hell is wrong with this world?

If you have any information about the death of Jeanna Leslie, you're encouraged to contact Denver Crime Stoppers at 720-913-STOP (7867).

Services for Leslie are pending.