A photo of the late John Pacheaco Jr. and an image from surveillance video shortly before he was fatally shot by members of the Glendale Police Department. haltzmanlaw.com
The police shooting that took the life of John Pacheaco Jr. on Halloween night prompted a jokey social media post by one of the officers who killed him that has elicited an apology from the Glendale Police Department — and that's hardly the only controversial part of the story.

Note that the officers who gunned down Pacheaco are members of the GPD, yet the incident took place in Denver, whose police department is now in charge of investigating what happened. The Glendale officers also fired into a moving vehicle — a tactic that is widely derided by police experts and was banned by the DPD after a fatality that sparked widespread protests and a huge settlement.

This year's Enhance Law Enforcement Integrity bill, signed into law by Governor Jared Polis in June, requires all Colorado police agencies to implement the use of body cams by July 2023, and Captain Mike Gross, a GPD spokesperson, confirms that "the body-worn cameras are 'scheduled' to be implemented next year." But even though Glendale has a much larger tax base than many communities in the state, he suggests that such a move could be delayed for financial reasons. "That is dependent on budget, and our city, like most, has been hard hit by the pandemic," he says, adding, "We have no plans to add in-car video cameras."

Otherwise, Gross declines to comment on the shooting, citing the ongoing investigation.

With no police images available, attorney Matthew Haltzman of the Fort Collins-based Haltzman Law Firm, who's representing Pacheaco's family, was left to search for video of the shooting from other sources — and he found two different clips.

In the meantime, Officer Chandler Phillips, who was involved in the shooting, made the highly dubious decision to share a (now-deleted) post joshing about being stuck on desk duty during the inquiry. Superimposed over a photo of Phillips wearing a supposed-to-be-comic frown on his face is an image of actor Mark Wahlberg from the 2010 movie The Other Guys declaring, "I'm a peacock! You gotta let me fly!" 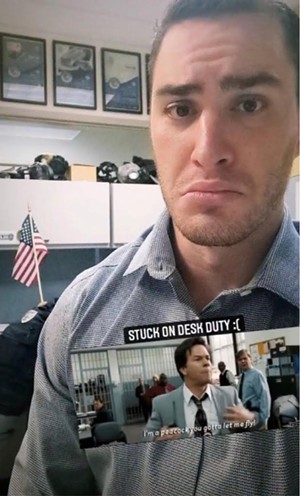 "We are not comfortable with the photo or the captions, and they are in poor taste to say the least," Dillon acknowledges. "The Pacheaco family has suffered a tremendous loss, and the situation should not be made light of in any way."

Dillon stresses that "the Glendale Police Department apologizes for the actions of our officer. Once it was brought to our attention, we immediately addressed the situation with the officer. This included ordering him to remove the posting."

In Dillion's words, "Our officers are trained in the proper use of social media, and it is a regular topic of discussion with our employees. Again, this is a regrettable incident, and the Glendale Police Department expects a higher degree of professionalism from the organization and its employees."

The sequence of events that led to Pacheaco's death started just prior to 10 p.m. on October 31, when an allegedly stolen Dodge pickup truck driven by Pacheaco came to a stop on Colorado Boulevard not far from the Alameda intersection. A few minutes later, with the truck still stationary, a Glendale officer pulled up behind it. Shortly thereafter, other units arrived and parked in a way intended to make escape impossible. The truck subsequently rolled forward into one police car before shifting into reverse and hitting more vehicles to the rear. At that point, the cops start shooting — and Pacheaco didn't survive the wounds he sustained.


A second video located by the Pacheaco family's attorney is surveillance footage that shows the truck entering the frame at around the 4:40 mark, after which police arrive. The truck begins moving at about 9:50 into the video, after which triggers are pulled:

The issue of police shooting into moving vehicles was central to a March 2019 Westword article about Chayley Tolin, who sustained life-threatening injuries after cops began blasting away at her stolen ride in a Swedish Medical Center parking structure in Englewood during a busy morning, when employees and patients were rushing to work and appointments.

Weighing in on this practice was Chuck Wexler, executive director of the Washington, D.C.-based Police Executive Research Forum (PERF), a nonprofit, independent policing think tank. In his view, such shootings unnecessarily risk the lives of cops, suspects and bystanders, often over car theft, which is viewed as a relatively minor crime. "Almost no one even goes to jail for stealing a car anymore," Wexler pointed out.

PERF's mandate against shooting into a moving vehicle isn’t a radical new theory. Wexler noted that it has been “the gold standard, one of the guiding principles in the use of force, for more than forty years. Yet there are still departments that haven’t changed this policy" — including Glendale. Denver has, however: The DOD changed its policy following the January 2015 death of seventeen-year-old Jessica Hernandez, who was behind the wheel of a stolen car when officers started shooting.

Denver officials subsequently paid Hernandez's family a settlement of just under $1 million and pledged to institute other changes intended to prevent such a tragedy from occurring in the future. Today, DPD officers can no longer justify shooting by claiming that the car itself was a weapon — and Pacheaco was otherwise unarmed when the Glendale cops killed him.

Haltzman is calling for "a full and transparent investigation into the circumstances around John's death. His family's grieving, and they deserve answers." According to information the attorney has collected, it appears that the Glendale officers "fired into the truck multiple times, striking him in the chest, face, neck and arm, all seemingly to prevent what looks like minor property damage in Denver's jurisdiction," he says. "And there's a lot of research out there, and even federal Department of Justice guidelines, that essentially say, 'Don't shoot into a moving vehicle,' because it doesn't help anything. Ultimately, Mr. Pacheaco was shot multiple times, and we don't believe there was a valid reason for that."

At this point, Haltzman doesn't know why Pacheaco braked the truck to a halt in the middle of Colorado Boulevard — "but whether it was a medical event or an issue of intoxication, this should quite frankly scare people," he says.

And no matter what Denver's investigation finds, Haltzman notes that the filing of a lawsuit against the Glendale Police Department is "imminent."
KEEP WESTWORD FREE... Since we started Westword, it has been defined as the free, independent voice of Denver, and we'd like to keep it that way. With local media under siege, it's more important than ever for us to rally support behind funding our local journalism. You can help by participating in our "I Support" program, allowing us to keep offering readers access to our incisive coverage of local news, food and culture with no paywalls.
Make a one-time donation today for as little as $1.