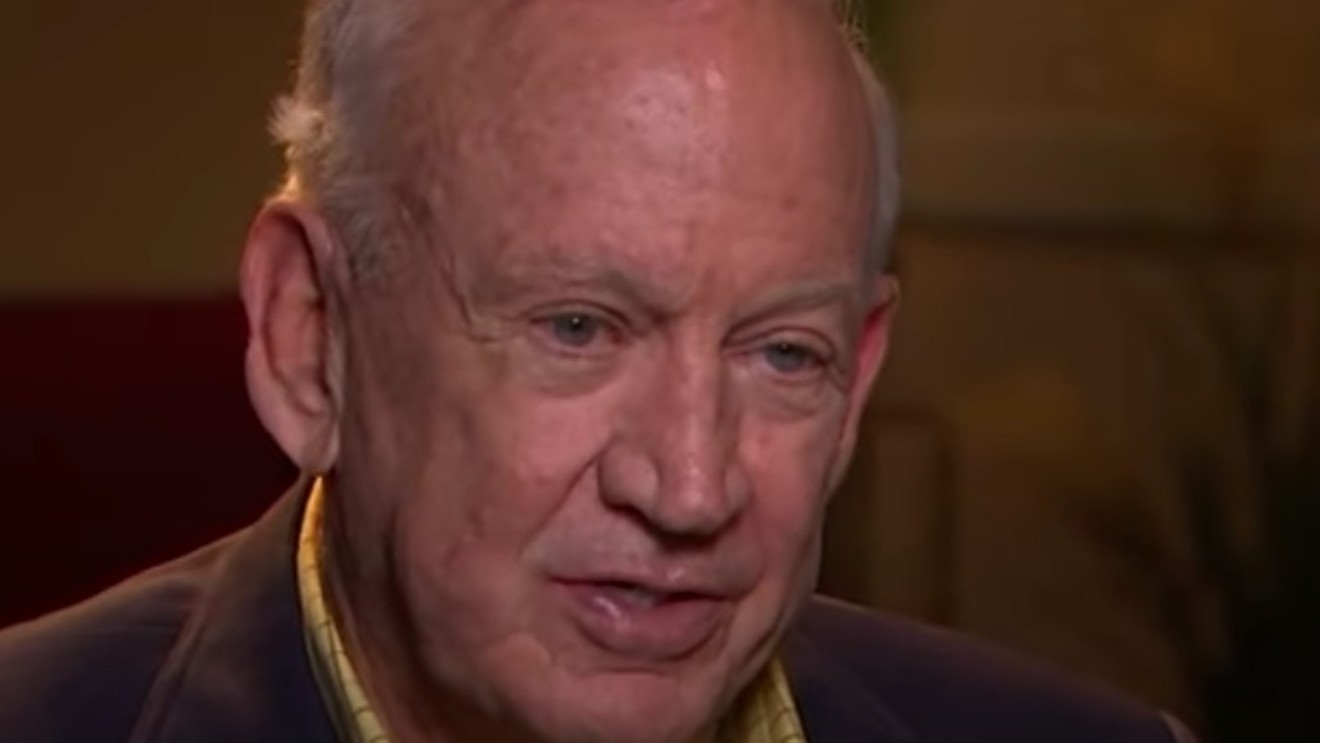 John Ramsey during a recent interview with Access Hollywood. Access Hollywood via YouTube
John Ramsey, whose six-year-old daughter, JonBenét, was murdered in Boulder on December 26, 1996, made national news again on April 30. During an appearance at CrimeCon 2022 in Las Vegas alongside former 9News journalist Paula Woodward, he publicly declared his support for a petition calling on Governor Jared Polis to designate an independent agency to make decisions about testing the remaining DNA in the case rather than leaving such choices to the Boulder Police Department.

Ramsey says that this position is based on bitter personal experience: In the more than 25 years since his daughter's tragic death, he's grown increasingly convinced that the Boulder PD is incapable of solving the crime without assistance that the officials in charge have regularly refused. "They don't have the resources, they don't have the skill set, and they've got a bias that was built in from the beginning," he says, citing their belief that a family member committed the crime. "And for some unfathomable reason," he adds, "that has never changed."

Woodward prompted Ramsey's CrimeCon appearance. "Paula brought it up a few months ago," he recalls.  "She said she'd been invited to go and it might be worthwhile. The main reason I've done these media things throughout the years is to keep pressure on the police to do the right thing and not let this case end up in a dusty file cabinet somewhere."

Ramsey's decision to attend CrimeCon might seem like a willing stroll into the lion's den, since many true-crime obsessives who attend such conventions have long believed in the guilt and/or complicity of Ramsey and his late wife, Patsy. But that's a misconception, he says: "Throughout this ordeal, people have been wonderful to us almost without exception. If there were people around us who didn't like us, they didn't say anything, and we've had a lot of people who'll give us hugs and apologize for the things that were said and done to us. It's actually been very uplifting to be in public."

Given that approximately 4,000 people gathered to hear him and Woodward speak in Las Vegas, "I figured there might be a heckler or two, but there wasn't," he adds. "Everyone seemed very supportive, actually. It was very positive for me, and it really got me energized to keep pushing to try to get the right thing done."

Granted, previous efforts haven't always gone as he'd hoped. Even after then-Boulder District Attorney Mary Lacy publicly removed the family from the umbrella of suspicion back in 2008, based on the discovery of unknown male DNA on JonBenét's clothing, the police department has kept him and his loved ones at a distance.

"They haven't communicated with us at all," Ramsey says. "The only communication I've had wasn't with the current police chief — they've gone through several of them — but with the one who replaced Mark Beckner," who retired in 2014. Ramsey reached out to Greg Testa, Beckner's successor, "and asked for a meeting, and he complied. He was a nice guy, and he had all his people there, including the DA. I said, 'Look, there have been a lot of misunderstandings, and I've certainly been critical of the Boulder police in the past. But this is a new chapter, as far as I'm concerned. Let's start fresh and get this thing solved, and if you have any questions for me, or need any information, here's my phone number.' It was a very cordial meeting. But that was the last time I heard from him." 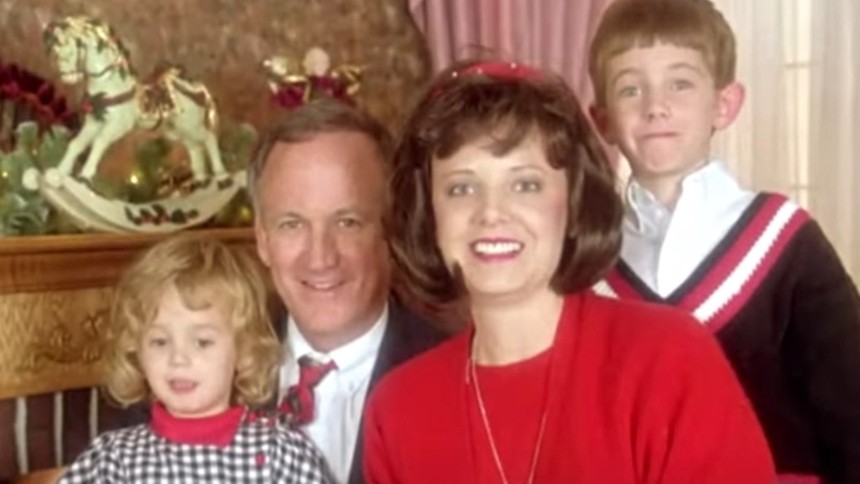 (From left) JonBenét, John, Patsy and Burke Ramsey in an early 1990s family photo.
Family photo/Access Hollywood via YouTube
Boulder police representatives didn't have any interest in working with him, Ramsey suggests, "because they decided on day one, before any evidence was looked at, that one of the parents had done it, because we allegedly 'didn't act right.' That was their whole case. And the two detectives that were there 25 years ago [Ron Gosage and Tom Trujillo] had no homicide experience, and they're still there. They still handle the case. Now, I don't fault them for not knowing what they're doing, because there aren't many homicides in Boulder. But what I do fault them for is that they refused help from people who knew what they were doing. Help was offered profusely; the Denver police offered to put two experienced homicide detectives on the case, but Boulder refused. And that's just unacceptable."

According to Ramsey, Lacy subsequently told him "the police strategy was to release misleading information that would put intense pressure on us, so that one of us would confess on the other — because they knew it was one of us, but they didn't know which one. They hoped that so much pressure would be put on that an innocent one would would turn the guilty one in. But there was no evidence, and the evidence conflicted with their theory, including the unidentified male DNA. She said she'd never seen a police department try to explain away unidentified male DNA in a sexual-assault case, but they'd made up their mind, and they were going to figure out how to get it done despite the evidence."

The approach certainly worked on millions of people who followed the investigation. "I remember there was a Gallup poll fairly early on, and 70 percent thought we were guilty," Ramsey recalls. "And how could they think otherwise, based on what they were hearing? But the dilemma for the police was that they didn't have the evidence."

The nadir for Ramsey was a CBS docuseries in which experts concluded that JonBenét had been slain by her brother, Burke, who was nine at the time of her death. A lawsuit filed on Burke's behalf was settled in 2019, but Ramsey's frustration over the situation remains near the surface. "That was absolutely the lowest of the low in this whole thing," he maintains. "That was below even the lowest tabloid standard. It was disgraceful what they did, and they did it all for ratings."

In many ways, coverage of the murder transformed the cable-TV news industry, and Ramsey still mourns the deterioration of standards.

"What I learned about the tabloid industry, the National Enquirers and the Globes, is that they know sensational news sells, so they'd make things up and then pay lots of money in legal settlements for defamation and libel, because that was the cost of the product," he says. In contrast, "legitimate news checked facts and made sure what they were reporting was hopefully accurate. But in our case, the tabloids would report out false information and the mainstream media would pick it up — and that was the tragedy. I remember reading a front-page article in USA Today, the national newspaper, that said, 'It was reported in the Globe that....' And that's how it evolved. It was a feeding frenzy."

Today, of course, the line between true crime reporting and entertainment has blurred even further. At CrimeCon, Ramsey and his wife Jan, whom he married in 2011, five years after Patsy's death from cancer, met someone involved in The Thing About Pam, an NBC/Peacock limited series based on the 2011 murder of Betsy Faria and a scheme manipulated by a woman named Pam Hupp, portrayed by Renée Zellweger. "Jan wanted to see it," Ramsey points out, "and we started to watch, but there were so many things that were like what I went through: the rush to judgment, the false accusations. So we turned it off."

Ramsey says he supports the petition to assign DNA duties to an independent firm because "the government doesn't have the latest technology. We talked to the FBI a couple of months ago, and they said they didn't have the latest and greatest because it's such a fast-moving field, and they have to get a budget and go out for requisitions — and that takes time. You need to go to one of these cutting-edge independent labs. so that's our push. There are four or five items that have never been tested for DNA that I know of, and they should have been, including the garotte that strangled my daughter. The killer had to touch these items, and even if he wore gloves, it's hard not to leave DNA. And familial DNA has had some remarkable successes. The Golden State Killer was found after forty years because of it."

A statement from Polis's office that the petition's request will be considered strikes Ramsey as a positive development: "I was encouraged by his comments, and I hope he's sincere in that. I have no reason to doubt that he is, but the proof will be in the actions taken."

In the meantime, Ramsey says he feels that "the murder of a child ten years and under ought to be a federal crime. We ought to bring the full resources of our country to bear. We have one of the highest child homicide rates of any country in the world, and you can't leave it up to departments like the Boulder Police — because that's like leaving it up to Barney Fife to solve it. Because if it happened in Mayberry and Barney is so arrogant and egotistical that he thinks he doesn't need help, it's never going to be solved. And that's what happened in our case."

Click to read the petition, "Justice for JonBenét Ramsey."
KEEP WESTWORD FREE... Since we started Westword, it has been defined as the free, independent voice of Denver, and we'd like to keep it that way. With local media under siege, it's more important than ever for us to rally support behind funding our local journalism. You can help by participating in our "I Support" program, allowing us to keep offering readers access to our incisive coverage of local news, food and culture with no paywalls.
Make a one-time donation today for as little as $1.