A drill rig beneath the Broadway bridge over C-470 circa December 2017. Colorado Department of Transportation
The final 2018 Colorado election results show that Proposition 109, a transportation measure better known as Fix Our Damn Roads, lost by a substantial margin. But the Independence Institute's Jon Caldara, 109's primary backer, argues that the proposal was actually a winner, because it helped kill Proposition 110, which took a very different approach to traffic-related problems in the state.

"Keep in mind why we did 109 in the first place," Caldara says. "It was to make sure a tax increase would not pass. We wanted to give people an honest choice, and by doing so, we made sure 110 went down in spectacular glory. That was our first and foremost goal."

Proposition 110 did indeed ask Colorado voters to invest more money in roads, by way of a .62 percent tax increase, or about six cents on a $10 purchase; this approach was expected to generate around $767 million in year one and likely more in succeeding years over the next two decades.

In contrast, Proposition 109 called for no new taxes but would have increased state debt by $3.5 billion. Earlier this year, Caldara told us that this amount would be covered largely by an increase in taxes instituted under what he referred to as the "Trump tax code. ... You'll find out next April when you do your taxes that Coloradans will be paying a crap-ton more in state income taxes. In fact, the legislative council believes that in the next five years, it could grow to $900 million more a year. So what Fix Our Damn Roads says is, 'Let's spend that money fixing our damn roads rather than letting it get swallowed up into the abyss.' In other words, you're already paying a massive tax increase. Let's fix our roads with it." 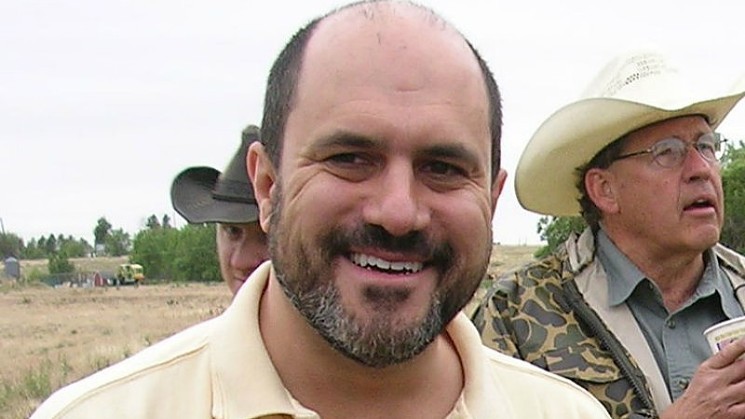 The Independence Institute's Jon Caldara was the main proponent of Proposition 109.
File photo
The folks behind Proposition 110 questioned whether this scenario was realistic, and voters weren't convinced, either. But Caldara still thinks it was a good idea. Even though he now says Fix Our Damn Roads was mainly intended to serve as a lethal weapon against 110, he stresses that "it would have been nice if we'd passed 109, because the need is there and the money is also there."

Of course, Proposition 110 might have failed even without the presence of Fix Our Damn Roads, as have so many tax-increase requests that have been placed before Colorado's citizenry under the procedure dictated by the Taxpayer's Bill of Rights, penned by Douglas Bruce and passed in 1992. But Caldara believes the prospect of passage given the demonstrable need for road improvements was too great to take that risk.

"I'll answer it this way: I don't know what was spent for the tax increase of Amendment 73," an education measure that also went belly up on Election Day. "But the Denver Chamber of Commerce raised almost $8 million to pass Proposition 110. So I have no doubt that 109 had a massive impact. There's no question about that. Proposition 110 could have died under its own weight, but we'll let historians argue about that some other day."

After the crash-and-burn of 109 and 110, the Colorado Department of Transportation's Amy Ford floated various ideas about how to get thus-far-unfunded projects off the ground. In addition, she wondered if the approximate 40 percent support each ballot measure garnered meant that "80 percent of people were tracking toward transportation." 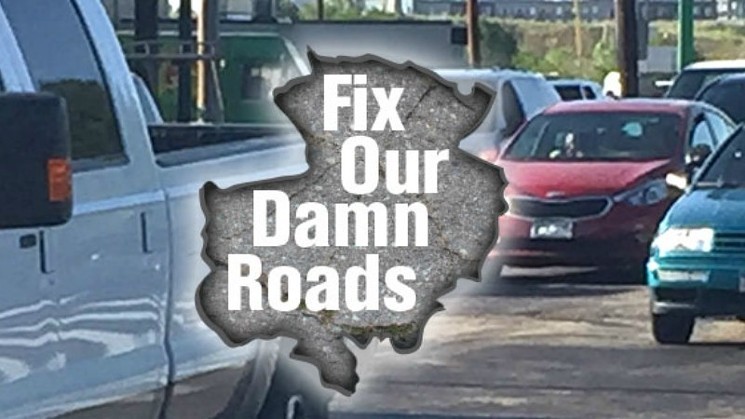 An image from the Fix Our Damn Roads Facebook page.
Facebook
Caldara brands this theory "quaint. But the money is there. We do need more funding for roads, and fortunately, the state budget is chock-full of funding. It will have more funding than it knows what to do with for the next decade, with the changes to federal tax law. It's going to bring in billions of dollars to the state that the people never voted on. If CDOT wants to make a case that the money should be used to build roads, I'll stand alongside them and help them get it done. But if their message is, 'We need a tax increase to build more bike paths and transit,' I will oppose them."

Another potential source of funds, in Caldara's view, involves what he brands "dependency programs. Good God, we've got one out of every four Coloradans on Medicaid. We should do what other states do and at least put a work requirement on able-bodied people in order for them to get Medicaid benefits. If we did that, the Medicaid rolls would drop and we'd see more money for things like roads."

However, he goes on, "I'm not convinced that the new, hard-edged progressives who are taking over the state want money to go to roads. My sense is that anything that goes to roads must pay ransom to socially engineered transit: bike paths and Bustang and trolley cars and open space and who knows what else they have planned."

He adds: "We'll see if the legislature and the new governor [Jared Polis] really care about roads, or whether it's all lip service. But I'm not holding my breath waiting for them to do something."
KEEP WESTWORD FREE... Since we started Westword, it has been defined as the free, independent voice of Denver, and we'd like to keep it that way. With local media under siege, it's more important than ever for us to rally support behind funding our local journalism. You can help by participating in our "I Support" program, allowing us to keep offering readers access to our incisive coverage of local news, food and culture with no paywalls.
Make a one-time donation today for as little as $1.