A photo of Burke and JonBenét Ramsey on the Boulder girl's last Christmas morning, in 1996. WeHaveYourDaughter.net
CBS has formally asked a court to dismiss a lawsuit filed on behalf of Burke Ramsey over a 2016 docuseries in which a team of analysts concluded that he'd murdered his sister, JonBenét Ramsey, in their Boulder home on Christmas Day 1996. In response, Ramsey family attorney Lin Wood summarily rejects the arguments made by CBS and Dr. Werner Spitz, a participant in the docuseries being sued separately for comments he made last September during a WWJ-AM/CBS Detroit interview publicizing the program.

"CBS and the other docuseries’ defendants have recently moved to dismiss Burke’s complaint on essentially the same basis that Dr. Spitz did previously, contending that their accusation against Burke is protected opinion when taken in context," notes the Atlanta-based Wood, corresponding via e-mail. "In both instances, the defense asserts, as it must, that no reasonable mind could have taken the accusation to be one of fact rather than a mere subjective opinion or hypothesis."

"CBS — one of the most well-known news outlets in the world — put up seven 'experts' in a four-hour 'documentary' and marketed their 'true-crime' series as giving one 'complete theory' that 'solved' the case, all the while representing the series as a documentary," he maintains.

Specifically, Spitz and the other panelists on the program, titled The Case of: JonBenét Ramsey, concluded that Burke killed his sister with a blow to the head. The following image from the docuseries captures a reenactment; Spitz is seen at left. 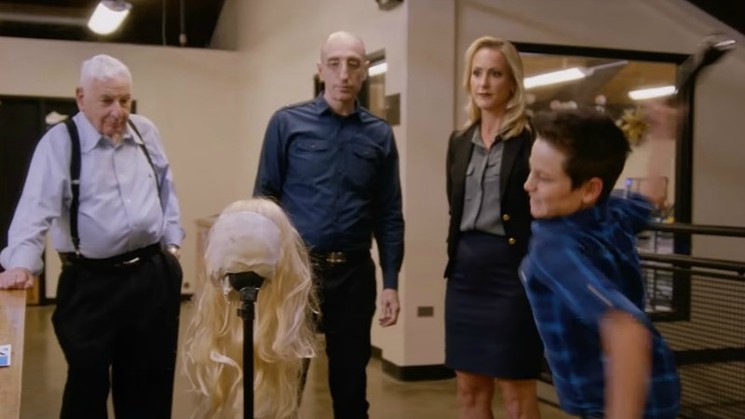 Dr. Werner Spitz, left, watches as a child is called upon to act out a theory of how Burke Ramsey could have killed his sister, JonBenét, from the CBS program The Case of: JonBenét Ramsey.
CBS
In Wood's view, "It is difficult to understand how, in that context, the accusation against Burke could have been intended and received as anything but a factual accusation. And that is clearly what the viewer expected — a truthful and factual 'documentary' providing insight into this case."

Instead, as the lawsuit alleges, "CBS and the others consciously portrayed false, skewed and misrepresentative facts and recreations throughout the broadcast that stole from the viewers their ability to evaluate the murder of JonBenét Ramsey and CBS’s accusation against Burke," Wood allows. "For this reason, and the issue of objective fact or subjective opinion aside, I do not believe the First Amendment protects statements that are based on a false disclosed basis or an undisclosed and incomplete basis."

Wood also provides an update on the Spitz suit, which was filed in Michigan.

"We had a hearing...in Detroit on the defense’s motion to dismiss the case," he notes. "Interestingly, despite the defense having provided to the court a DVD of CBS’ documentary and stating it was 'central' to their opinion defense, Dr. Spitz never provided to the court a copy of his WWJ radio interview wherein he made the statements complained of in the lawsuit. When the court requested a copy at the hearing, it appeared to my team that his lawyers were reluctant to provide it to the court."

Nonetheless, Wood goes on, "that radio broadcast will be provided to the court and to me....  So we will know more about the context in which Dr. Spitz uttered his accusations against this young man in short order."

"As paradoxical as it may seem in light of the many exonerations of Burke by several public officials, Burke will continue his quest to prove his innocence in a court of law," he writes. "We do not expect the court to deny him that opportunity by ruling that these accusations are protected speech."