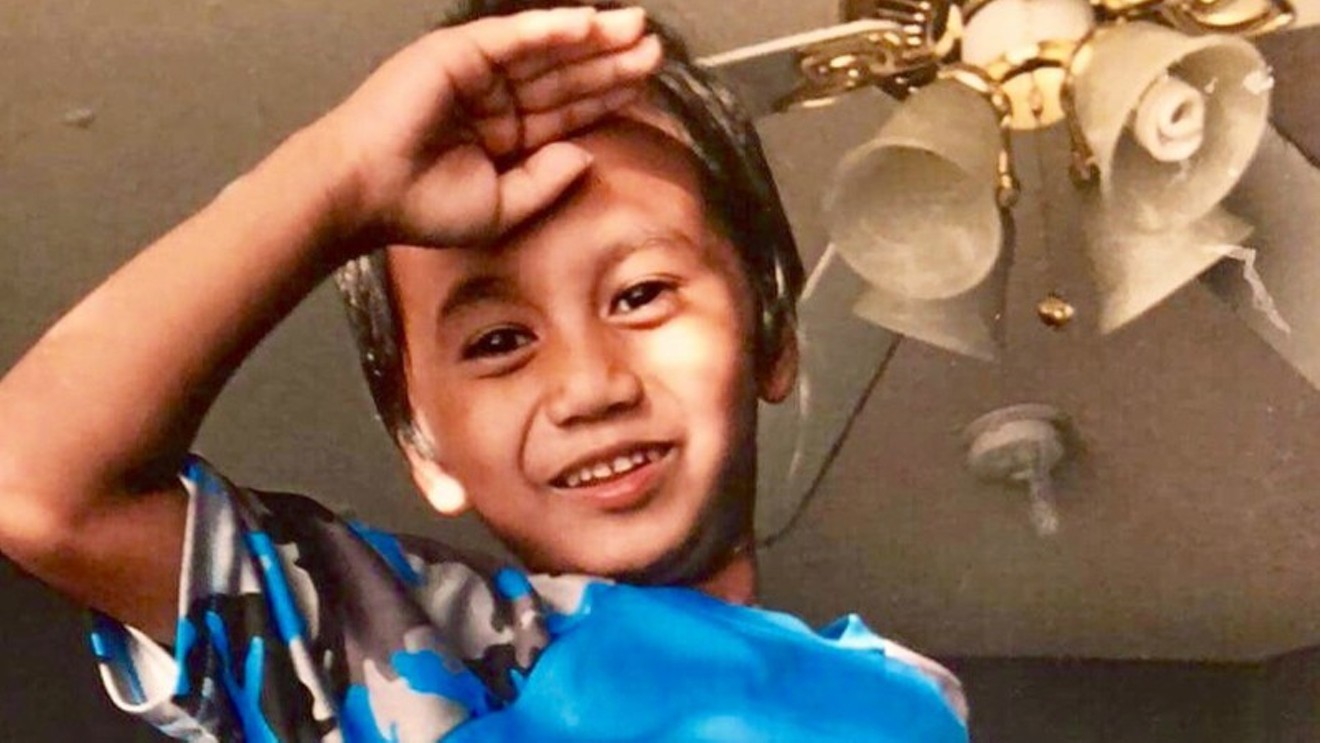 Jordan Vong's body was found in his family's home. Family photo via People
At first, the Denver Police Department inquiry into the passing of seven-year-old Montbello resident Jordan Vong was termed a "death investigation." But now the DPD is revealing that a sixteen-year-old girl has been arrested on suspicion of first-degree murder.

The girl's name has not yet been released owing to her age. Her status as a juvenile also prevents the department from divulging her relationship, if any, to Vong.

This information was shared at a press conference yesterday, August 8, delivered by Division Chief Joe Montoya, whose presentation, seen in a video shared here, was appropriately somber.

At one point, he said, "Once this came to the sad conclusion that it did, the emotional drain is very intense. I felt it myself, and I know that the investigators themselves felt it."

Montoya added that "the roller-coaster ride you go through in a 48-hour span of an investigation, especially involving a child, is eye-opening. It really is."

According to Montoya, the inquiry was sparked by a call to the DPD communication center at around 4:30 p.m. on Monday, August 6, from one of Vong's family members.

That individual said that Vong, who lived at a home on the 4900 block of Fairplay Street, was missing. He'd last been seen at around 2:40 p.m. that day.

Officers arrived at the scene within fifteen minutes and conducted what Montoya characterized as a "cursory search" of the home in an effort to rule out that Vong was hiding or playing some kind of game.

Meanwhile, a reverse 911 call went out to 600 homes within a one-mile radius of Vong's residence in the hope that a neighbor might have spotted the boy. Social media was also deployed, and a police helicopter moved forward with an aerial search of open-space settings and bodies of water. From there, a twenty-block grid search and canvass of the neighborhood was conducted. However, an Amber Alert wasn't issued because, Montoya said, there was no immediate evidence that Vong had been abducted. Instead, an endangered missing-child alert was sent to local law-enforcement agencies.


The investigation continued on Tuesday, August 7, and over the course of the day, Montoya revealed that detectives felt "a more thorough search of the residence was necessary." To that end, the DPD obtained a search warrant. Officers entered the home at 8:20 p.m., and found Jordan deceased approximately thirty minutes later.

More evidence was collected overnight, and the following morning, August 8, a sixteen-year-old female was taken into custody on suspicion of first-degree murder.

After stressing that laws protecting juveniles prohibited him from going into detail about the girl, Montoya took questions from the media. The first question concerned the behavior of the family members and whether it prompted the request for a search warrant.

"The family was concerned and they were cooperative to a point," Montoya said. "I can't expand upon that because it is part of the active investigation."

In addition, he went on, "I can only state that the body was found in the home. I can't disclose where it was found or the condition when it was found."

Likewise, Montoya said that he "can't speak to whether or not we're going to be looking at additional suspects at this time" — though he acknowledged that Denver Human Services would "probably be involved in the evaluation of any other children in the home."

As for the decision to ask for a search warrant, the division chief allowed that "as information develops, if you're looking at the potential of it turning into a high-level investigation, potentially criminal, you need a search warrant to maintain the integrity of the case and present the best investigative product to the DA's office."

The Denver District Attorney's Office is charged with determining if criminal accusations are justified — and prosecutors will presumably decide if there's a rationale for charging the teen as an adult. The Denver coroner's office is expected to determine the official cause of death soon.

In Montoya's view, the family exhibited "some natural reactions, human reactions, to knowing that the child was discovered deceased. I'll leave it at that." But he also conceded that "there are a lot of pieces that just don't add up."
KEEP WESTWORD FREE... Since we started Westword, it has been defined as the free, independent voice of Denver, and we'd like to keep it that way. With local media under siege, it's more important than ever for us to rally support behind funding our local journalism. You can help by participating in our "I Support" program, allowing us to keep offering readers access to our incisive coverage of local news, food and culture with no paywalls.
Make a one-time donation today for as little as $1.