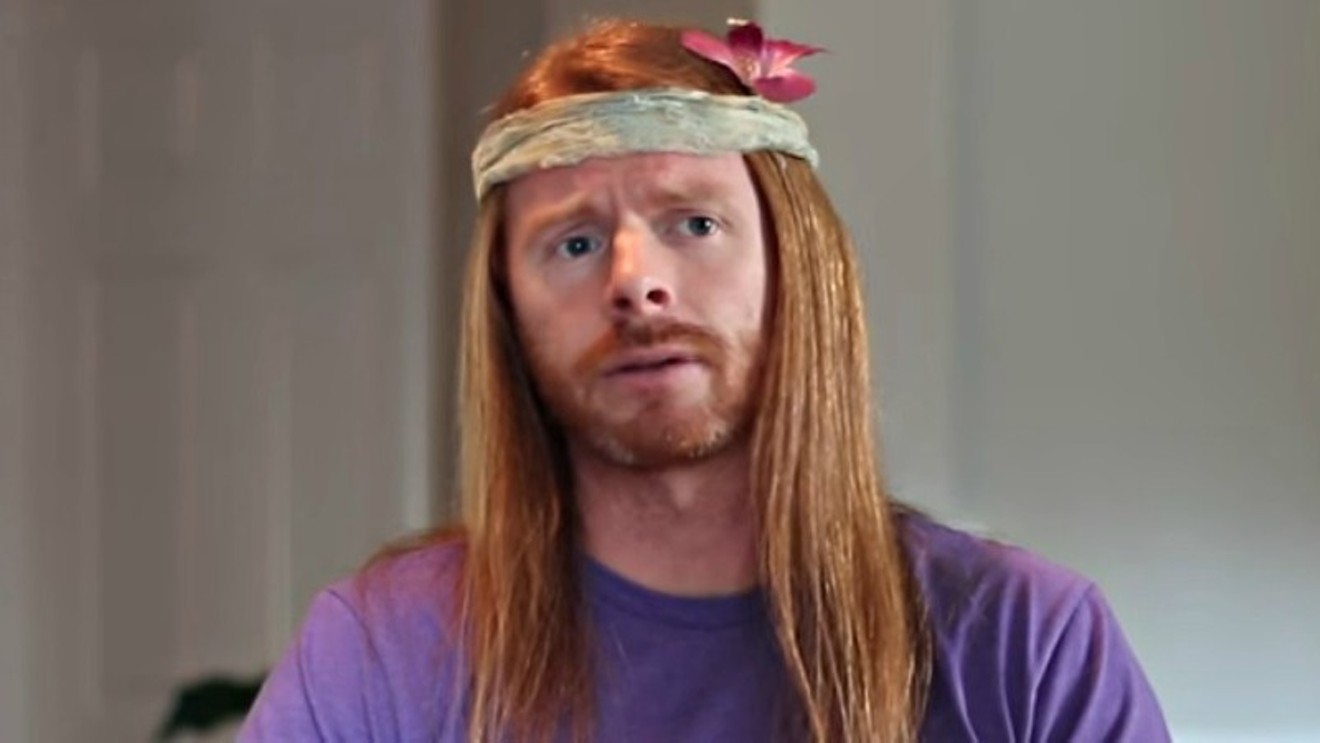 JP Sears clad in a Boulder-appropriate way. YouTube
JP Sears has gained fame as a comedian, life coach and author of How to Be Ultra Spiritual, which offers readers a guide to achieving "spiritual superiority" in just twelve and a half steps. No surprise, then, that he has a soft spot for Boulder, the recent repeat winner (according to National Geographic) as happiest city in the country, which he lovingly needles in a hilarious video on view below. In conversation, he makes it clear that his fondness for the town is no passing fancy.

"I believe my first time in Boulder was October of 2012," he says. "I was there to teach a workshop, and my impression was that there were a lot of weird people there — in the best sense of the word, since I think being normal is one of the worst diseases that you can have. It also was apparent to me that it was a very conscious community where what I would consider to be high-vibe people had gathered together" — which explains why his video declares Boulder to be the "consciousness capital."

In addition, Sears noticed that a lot of residents owned the same set of wheels.

"It's very much a drive-a-Subaru-Outback consciousness," he points out. "I think people of Boulder are most susceptible to the brainwashing advertising of the good folks at Subaru, and if I were to postulate a theory, it would probably be that the Subaru Outback brand is associated with the outdoors and the mountains. I think that fits Boulder very well."

So, too, do the entertainers who gravitate to Boulder's Pearl Street Mall. JP Sears getting ultra-spiritual.
howtobeultraspiritual.com
"One particular street performer is a friend of mine," Sears notes. "He juggles and memorizes every single zip code in the United States so he can tell people their zip code. To me, what I would call the eccentricity of the street performers in Boulder stands out to me. Certainly not all of them are doing mind-boggling things, but a lot of them are."

Among the themes Sears touches on in his video is "the Boulder mindset," he points out. "I think the trend of free thinking is part of that, and oddly enough, people trending toward free thinking tend to think very much alike. But there's also a beautiful inclusion that seems to be present in the way Boulder people think."

Critics of Boulder also sense a certain smugness, but Sears definitely isn't critical of this quality.

There's plenty of amusement in the following video as well.


As he acknowledges in the clip, Sears is also fan of what he sees as the "Boulder bubble" mentality.

"Anywhere I've ever gone, people will start to assume their reality is the reality," he says. "But I think it's more fun with Boulder, because Boulder is a lot more unique than your average town. It's much weirder, and when there's a heightened level of weirdness that becomes the norm, I love it, because its reality is different from the realities in other places."

Another Boulder attribute, from Sears's perspective, is "the inclusion of dogs everywhere. You go walking down Pearl Street and there are wonderful dogs with their owners. At outdoor cafes, there are always dogs, and at the publishing company that put out my book — Sounds True, which is in Louisville, just outside of Boulder — they have a bring-your-dog-to-work policy. They've got a huge building with maybe over a hundred employees, and every time I'm there, I'll see herds of wonderful, friendly dogs."

The cover of JP Sears's book How to Be Ultra Spiritual.
howtobeultraspiritual.com
Indeed, the video finds Sears speculating about running his own dog, Zephyr, for mayor of Boulder. Lately, however, the pooch has cooled on the idea.

"Zephyr happened to turn thirteen this past September, and he decided to bow out of the next mayoral election," he reveals. "He felt it would interfere with his nap time. But if he were to run, it would be on a platform of mandatory treats three times a day. And I think he would also want to outlaw people driving around with dogs in their car and the windows up. Dogs should be free to sniff the wind and have the wind blow through their ears."

Of course, Sears could always run for mayor in Zephyr's place, especially given his high public profile. "It's certainly near and dear to my heart how much Boulder welcomes me when I'm in town," he says. "Every time I'm at the Hotel Boulderado, they greet me by name, and last time I was at Alfalfa's, the health-food store there, they had a special kombucha drink named after me. I feel insanely loved walking around town and having lots of people come up to me and want to meet me and share their appreciation with me. My self-worth and self-esteem is always dramatically boosted by the love I get from Boulder."

Politics is out, though. "Zephyr won't let me run," Sears insists. "He says it would interfere with my ability to give him treats anytime he wants."

That's probably just as well, given how seriously Boulder takes the electoral process.

"Of all the places I've been, I think it was the most emotionally distraught over Trump's election," Sears recalls. "I was in town two days after the election, and it was definitely something I noticed. I had a meeting at Sounds True, and they told me that the day after the election, when everybody found out what had happened, they held a company-wide meditation to help people with their grieving."

Thank goodness for the Boulder bubble.