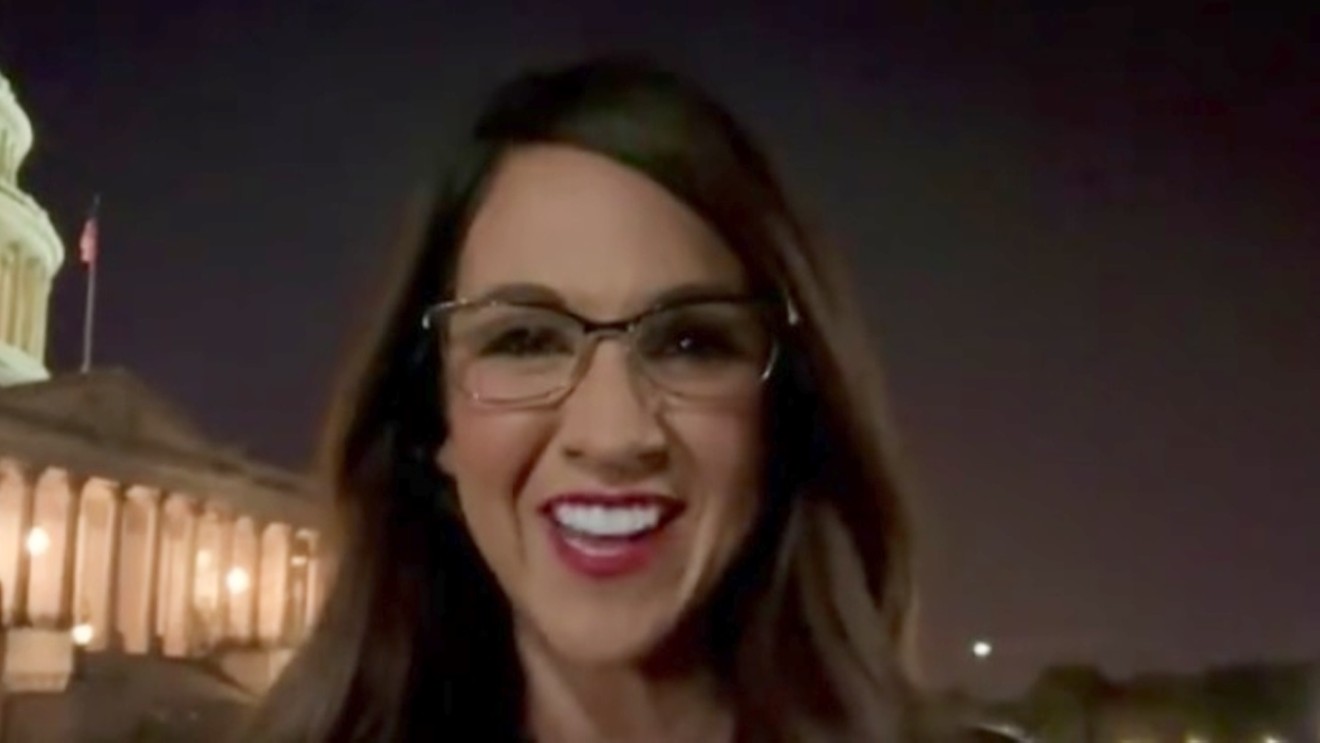 A screen capture from Representative Lauren Boebert's November 17 victory-declaration video,. @laurenboebert
Update: Adam Frisch has conceded to Lauren Boebert in the tightly contested race in Colorado's 3rd Congressional District. In a video on his campaign website, Frisch says in part, "We have shown the country that extremist politicians can be defeated. Loud voices are not invincible, shouting will not solve problems. We do not have to let hate win, but we can come together and talk about issues that are important to our individual lives and our communities."

Frisch added: "It would be disingenuous and unethical for us, or any other group, to continue to raise false hope and to encourage fundraising for a recount. Colorado’s elections are safe, accurate, and secure. Please, save your money for your groceries, your rent, your children, and for other important causes and organizations."

Original post: In a video shared late November 17, U.S. Representative Lauren Boebert claimed victory in her 3rd Congressional District race against Democrat Adam Frisch — even though her lead is so small that it will trigger an automatic recount.

While Boebert acknowledged that a recount will take place, she expressed confidence that she'll ultimately be declared the winner. "My campaign team and our lawyers will definitely make sure everything is conducted properly," she said — a message to loyalists that Boebert, who's categorized by the polling service FiveThirtyEight as an election denier, could cry foul should Frisch regain the advantage he held on election night.

The week before the election, FiveThirtyEight had Frisch winning in only three out of 100 simulated models based on polling data, and for good reason: Frisch had trailed substantially behind Boebert in most surveys throughout the months leading up to November 8, and since redistricting made the area even more Republican than it had been in 2020, when Boebert defeated Diane Mitsch Bush by more than 6 percent, she looked poised to broaden that gap.

But Frisch had a formula for defeating Boebert, as he explained in a July interview with Westword.

"This is one of the top races in the country, because of the handful of extremists in Congress right now, she's the only one who's vulnerable," he said. "We only need to get 10 percent of her prior voters, and a third of them just voted against her" — a reference to the 36.1 percent of the ballots that former state rep Don Coram kept from Boebert in the June 28 Republican primary. "It's an uphill challenge, but it's doable," he added.

Although Frisch initially seemed to have climbed that hill, in-person voting on Election Day favored Boebert, helping her to overtake him by over 1,000 votes on November 10. But that lead shrank in the most recent update from the Colorado Secretary of State's Office. As of 8:25 p.m. yesterday, when the last ballots were scheduled to be cured, Boebert had 163,758 votes to Frisch's 163,207, putting her 551 ahead.

These numbers translate to 50.08 percent for Boebert to 49.92 percent for Frisch — a difference of 0.16 percent. And Colorado law calls for a recount if the spread is less than 0.5 percent.

The only county in the 3rd Congressional District yet to finalize its count is Otero, which reportedly plans to finish up today. Boebert is currently leading Frisch in Otero by a substantial amount: 4,100 votes, or 58.66 percent, to Frish's 2,889 votes, or 41.34 percent. And she clearly believes that a Frisch triumph is now mathematically impossible, as she made clear in her video declaration.

"Hey, everyone," she began. "Great news tonight, as almost all the votes have finally been tallied. I'm told there are less than 200 votes outstanding, which makes me so happy to announce we have won this race."

She added, "With this victory, and with Republicans in control of the House of Representatives, we can focus on the issues that actually matter most, including getting inflation under control, increasing our domestic energy supply, securing the southern border, and being a strong check on the White House."

According to Boebert, the recount should be "completed in early December," but "past recounts in Colorado have resulted in far fewer votes being adjusted than anything that could affect the current outcome we're seeing tonight in this race. So come January, you can be certain of two things: I will be sworn in for my second term as your congresswoman, and Republicans can finally turn Pelosi's house back into the people's house."

I am so thankful for all of your support and I am so proud to be your Representative! pic.twitter.com/4gnmflotiU