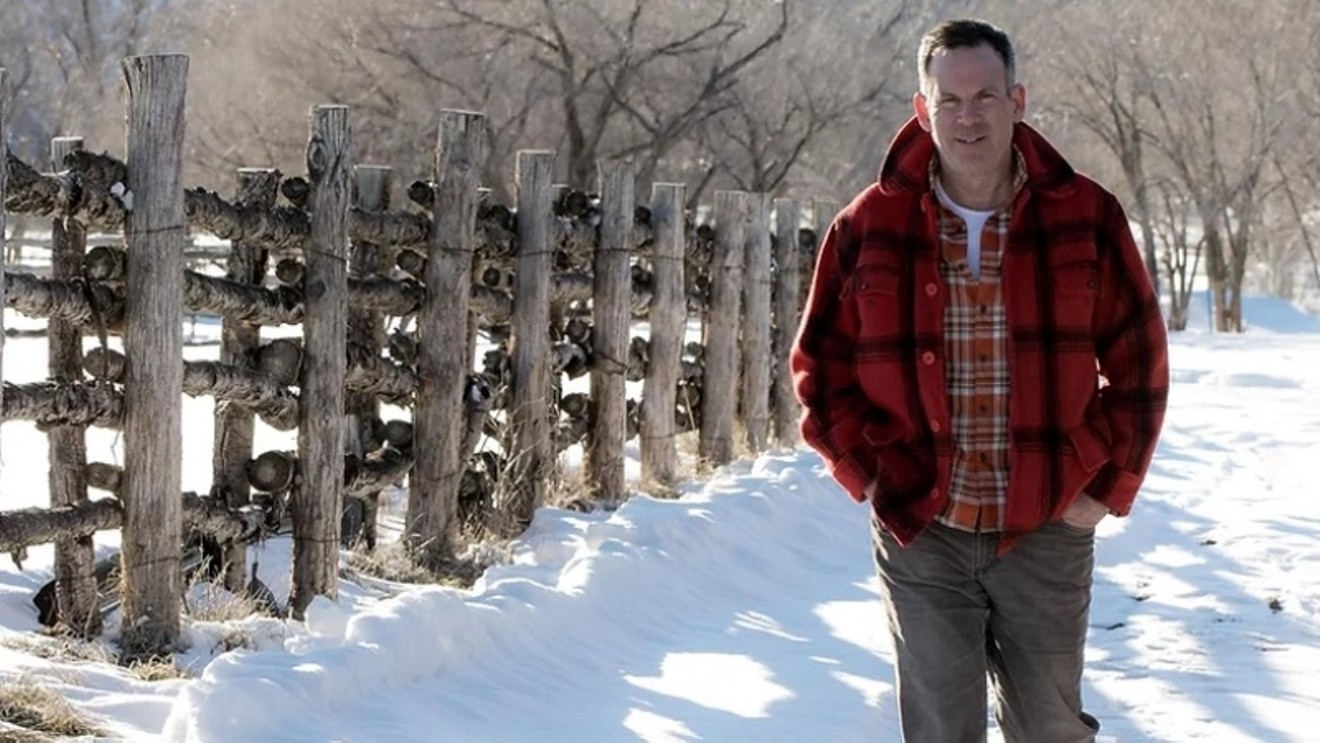 Adam Frisch is taking an analytical approach to his race against Representative Lauren Boebert. adamforcolorado.com
Aspen's Adam Frisch, the Democratic nominee for the 3rd Congressional District currently represented by Lauren Boebert, knows that he's something of an unlikely candidate for such a high-profile gig. "I'm self-aware that the average Democratic voter wasn't looking for a white, middle-age straight person from a resort community," he says with a smile.

Still, Frisch, a successful businessman who contributed an estimated $2 million to his own campaign, believes he has a formula to send Boebert packing despite redistricting changes that make defeating a Republican incumbent in the 3rd even more daunting than before.

"This is one of the top races in the country, because of the handful of extremists in Congress right now, she's the only one who's vulnerable. We only need to get 10 percent of her prior voters, and a third of them just voted against her," he notes, referring to the 36.1 percent of the vote that former state rep Don Coram kept from Boebert in the June 28 Republican primary. "It's an uphill challenge, but it's doable."

In last month's Democratic primary, Frisch defeated Sol Sandoval, who'd been considered the frontrunner to take on Boebert, with 42.4 percent of the vote to her 41.9 percent — a narrow margin, but just outside the point that would have triggered a recount. Both Sandoval and Alex Walker, who earned 15.7 percent of the vote (after launching his campaign with an ad showing a Boebert lookalike spraying faux sewage from a hose), have pledged to stump on his behalf.

When telling his origin story, Frisch focuses on elements that contradict the image of a rich, entitled Aspenite that Boebert and her minions are likely to push. "I spent my first five years on an Indian reservation in northeast Montana," he notes. His father worked in the public health service, went on to become a career OB/GYN and "spent the last four or five years before he retired working for Planned Parenthood, to make sure the next generation of health-care providers had the proper training." And after the family moved to Minneapolis, he says, "my mom helped with the public-schools system" on issues such as diversifying the student mix at various institutions.

During his youth, Frisch got into ski racing, which inspired him to enroll at the University of Colorado Boulder in 1986. His ski-racing career was short-circuited by injury, "but I decided to stay, because it's obviously a great institution," he says. He subsequently headed to New York City, where "I fell into working in one of the first socially responsible investment funds. It wasn't so much green technology, because there wasn't as much of it then, but helping people avoid certain industries when they were putting their money to work," he notes. From there, "I got involved with global interest rates and the financial markets — spent eight years traveling the world and went to forty or fifty different countries." 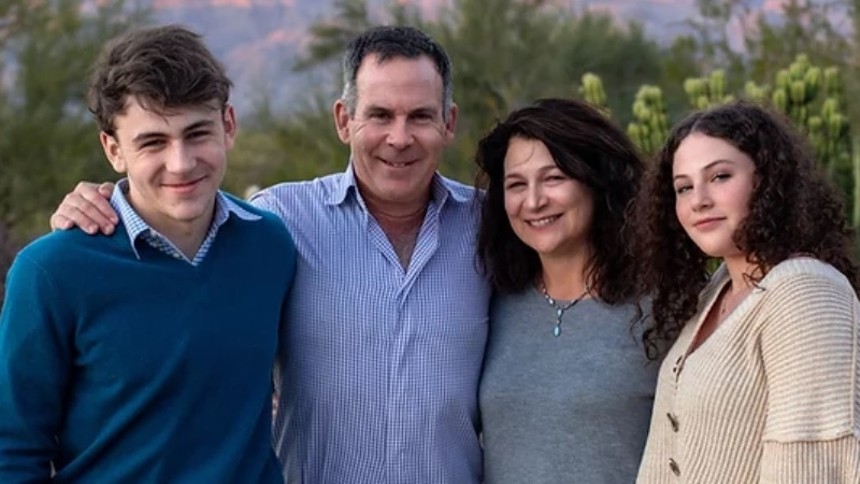 Adam Frisch with wife, Katy, and children, Felix and Quintessa.
adamforcolorado.com
After 911, Frisch decided to move back to Colorado and "ended up meeting a gal on the Western Slope and convinced her that if we wanted to build a family, we should possibly look at Aspen for a place to go, because of the business opportunities," he recalls. He and wife Katy settled in Aspen in 2003, and in addition to building that family — their two children are Quintessa, fifteen, and Felix, sixteen — they became embedded in the community. Katy "runs a family manufacturing business" and is currently president of the local school board, and Frisch spent eight years, from 2011 to 2019, as a member of the Aspen City Council, where "90 percent of my focus was about affordable housing, which is a really important aspect here in Aspen," he says. He also did some substitute teaching during COVID because of his belief that students learn better in a classroom.

Frisch's latest chapter began unfolding this past November. "After Boebert said something disparaging, mean, petty, obnoxious, bigoted, I pulled out the 2020 election results for six or seven people in the House — people like Marjorie Taylor Greene and Matt Gaetz. I saw that most of them had 65-to-75 percent win ratios in 2020, but Boebert had only won 51 percent of CD3 — it was 51 to 46 percent" over challenger Diane Mitsch Bush," he notes.  "I thought, if 5 percent of the people had switched their vote, Boebert would have lost."

In the two years that followed, the math became a little more difficult, with the 3rd Congressional District's percentage of Republican voters rising substantially after new lines were drawn. But Frisch says he was prepared for that: "I assumed redistricting was coming, so I thought we needed 10 percent to switch. But I still see her as electorally weak, and I thought that if a moderate Democrat could get past the primary, he could build a coalition with Democrats, independents and the rational Republican crowd. So 10 percent of those prior voters is the holy grail of how someone can win."

At that time, Frisch was registered as unaffiliated, but he switched to the Democratic Party in December. "I had some core Democratic values," he stresses. "The driving force is who sits on the U.S. Supreme Court. Taxes and regulations come and go, but it's obviously relevant how important the Supreme Court is. I know I'm not applying for a job that has a direct influence on who's on the court, but I'd rather have Democrats than Republicans making those decisions."

Nonetheless, he admits that "if there had been a normal Republican running, like Don Coram, I wouldn't have gotten into this race, because I don't think a Democrat can defeat what I would call a mainline Republican in this district." Indeed, he adds, "The only reason I got into this conversation was because of Boebert, who's extremist in a couple of ways. She's voted against the financial interests of our district and she has an extremist view of a number of things, including being really pro-Putin. And I don't need 50 percent of Republicans to vote for me. I only need 10 percent." 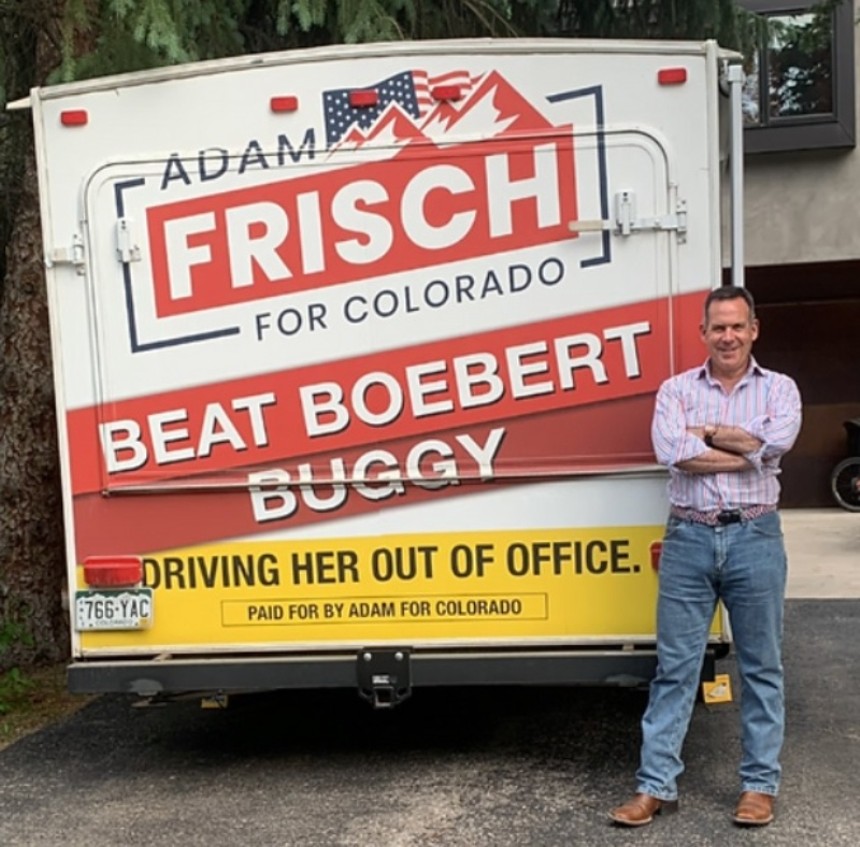 Adam Frisch posing by the "Beat Boebert Buggy."
adamforcolorado.com
Frisch announced his candidacy in February, and while he had the benefit of his personal financial resources, "We worked really hard," he recalls. "My wife and I had a nineteen-foot camper trailer, and we turned it into a mobile billboard — the 'Beat Boebert Buggy.' We drove to dozens of communities, including a lot of places that hadn't had a candidate come through when they could remember; we'd stop in front of schools to let people know how focused I was on education and just talk to them. And we won despite having a demographic that wasn't right up the alley of the traditional Democratic base because I was able to get in front of people and let them know I'm a kind, caring person who's a good listener, and my background doesn't conform to the stereotypes that people were concerned about."

The top issues for Frisch are "the economy and inflation. Everything costs too damn much, whether it's rent, a pound of beef or, obviously, a gallon of gas. We'll be going on some kind of economic-recovery tour and help people to understand that I've had a lot of success in business, and that type of success will be needed to focus on the economy." He's also concerned about making sure health care and educational opportunities are available in rural communities as well as larger metropolitan areas, plus issues related to water rights and energy. As he sees it, "we need to have a true transition from legacy production to future production, but we also need to respect people from those legacy industries. A great example of this transition is a 150-year-old steel mill in Pueblo that's 90 percent solar-powered. So Colorado has a lot of examples of how to do this transition properly. But it's important to realize that when these jobs change, people need to be moving to jobs that pay well."

Earlier this week, Frisch formally challenged Boebert to a series of five debates, with a format designed to discuss topics at length rather than in short social-media outbursts. "I think a lot of people know that her sweet spot is her Twitter account and being on cable news, where I think Fox News is the most liberal venue where she speaks," he says. "It's very clear that she's handled in a very protective way, and they don't allow non-friendly audience members to be in her crowds. But I think people in the district want to have longer, in-depth conversations that aren't petty — conversations about how we can help out families and individuals in CD3."

He adds: "Boebert and Marjorie Taylor Greene are chairs of the anger-tainment industry, and I think a lot of people want the circus to stop. She called Don Coram a 'woke liberal,' and he may be a lot of things, but he's not that. So I think a lot of people are looking for a rational choice, regardless of what party I'm representing. We're building a coalition of the pro-normal party."
KEEP WESTWORD FREE... Since we started Westword, it has been defined as the free, independent voice of Denver, and we'd like to keep it that way. With local media under siege, it's more important than ever for us to rally support behind funding our local journalism. You can help by participating in our "I Support" program, allowing us to keep offering readers access to our incisive coverage of local news, food and culture with no paywalls.
Make a one-time donation today for as little as $1.