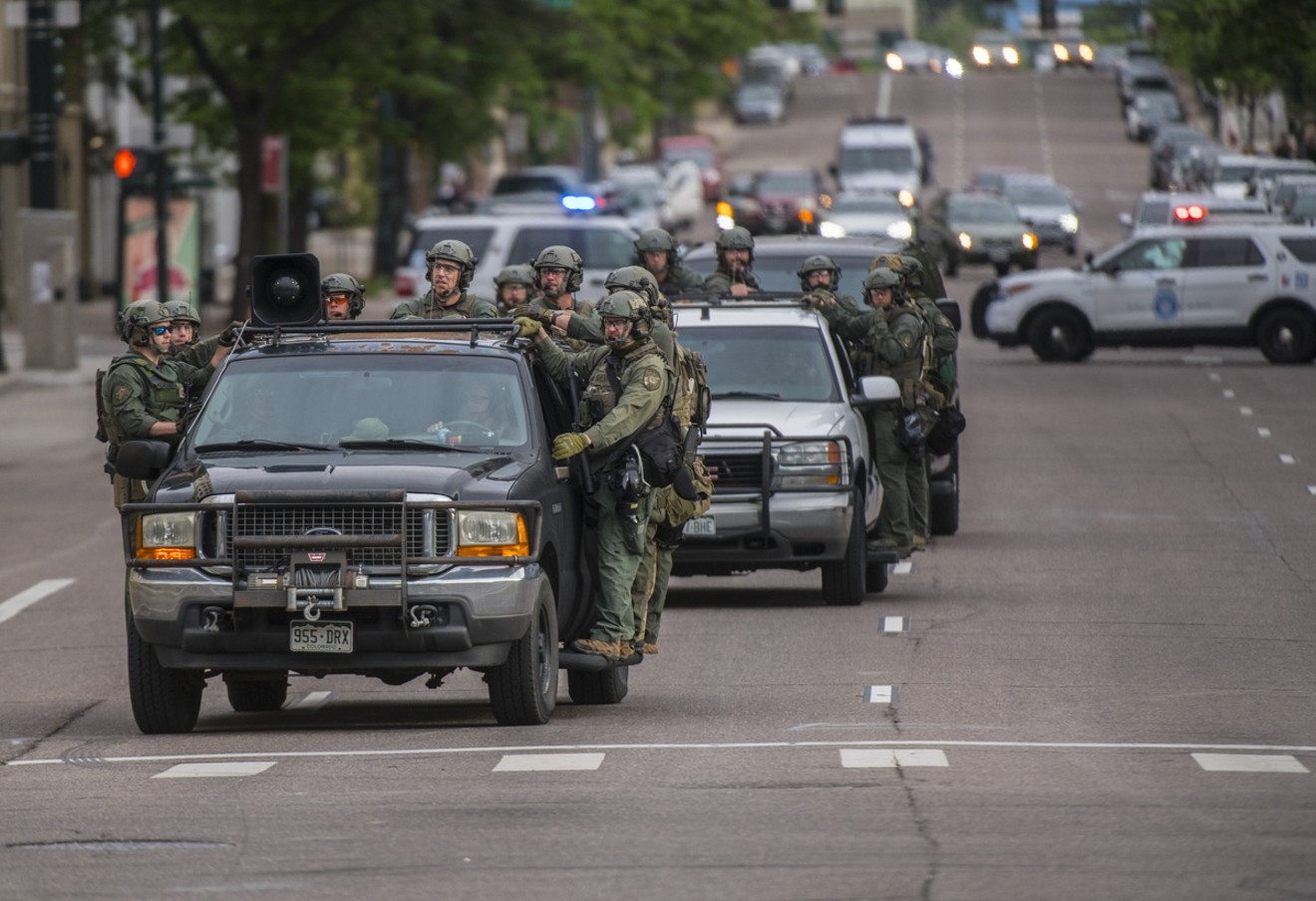 “I pulled our team immediately upon the temporary restraining order, and we haven’t returned,” says Broomfield Chief of Police Gary Creager. “Chief Paul Pazen, he’s a very smart man. He’s got his use-of-force policy. I’m not in a position at 8:30 on a Friday night, when the restraining order was issued, to review Chief Pazen’s policy.”

Like over a dozen other law enforcement agencies that had been assisting the DPD during the Denver protests, Creager's department operates under its own use-of-force policy, even when it's in another agency's jurisdiction — such as Denver.

The temporary restraining order issued by Judge R. Brooke Jackson of the U.S. District Court of Colorado put an end to this scattershot application of use-of-force policies. All law enforcement agencies working in Denver must abide by Denver's use-of-force policy, the judge ordered. And that led Creager to realize that he had to pull his officers.

Although some agencies decided they could no longer work in Denver, others continue to aid the DPD. "We are still receiving assistance from our mutual-aid partners. We will ask for assistance as needed," says Jay Casillas, a DPD spokesperson.

If the DPD asked his department for help again, Creager says, “it would be a new mutual-aid request predicated on whatever they needed, and then we’d make that determination again on all those factors.”

But while Creager would be willing to consider such a request, other law enforcement agencies definitely won't be able to assist Denver.

That's because Jackson's ruling dictates that body-worn cameras "should be activated and filming any and all acts of confrontation between police officers and others, and if that means increasing the supply of batteries, so be it."

At least three of the law enforcement agencies that had been helping Denver don't have body-worn cameras for their personnel.

Officers with the Arvada Police Department and deputies with the Jefferson County Sheriff's Office, who work together on the JeffCo Regional Tactical Team, were ready to assist Denver police on June 6. But then officials realized the team wasn't in a position to help, since it doesn't use body-worn cameras.

“If you didn't [have body cameras], you weren't allowed [to assist]. You weren't asked to assist,” says David Snelling, a spokesperson for the Arvada Police Department.

Officers with the Westminster Police Department are no longer able to help Denver because they don't have body-worn cameras, either.

Judge Jackson's ruling was aimed at protecting the constitutional rights of protesters. Complaints about excessive use of force by law enforcement and police misconduct during the protests have led some members of Denver City Council to call for defunding the police; Denver's Office of the Independent Monitor has also started an investigation. And at the state level, lawmakers are pushing through a bill that would significantly increase police accountability and reform certain law enforcement policies.

Westword reached out to all of the "mutual-aid partners" that have been assisting the DPD during the protests. Here's what their public information officers said about when the law enforcement authorities were present in Denver and why they left.

Adams County Sheriff's Office
May 30 through June 1. The office did not say why it stopped on June 1.

Arapahoe County Sheriff's Office
June 2 through June 6. “The mutual-aid request from Denver was only from June 2 to June 6,” says Ginger Delgado, a spokesperson for the sheriff’s office.

Arvada Police Department (shares the JeffCo Regional Tactical Team with the Jefferson County Sheriff's Office)
May 29, May 31 and June 1. On June 6, the JeffCo Regional Tactical Team was “going to go down,” according to Jefferson County Sheriff’s Office spokesperson Mike Taplin, but members of the team don’t have body cameras, so the team was not used on that day.

“If you didn't [have body cameras] you weren't allowed [to assist]. You weren't asked to assist,” says David Snelling, a spokesperson for the Arvada Police Department.

“I pulled our team immediately upon the temporary restraining order and we haven’t returned,” says Gary Creager. If the DPD were to again ask for help, he adds, “it would be a new mutual aid request predicated on whatever they needed, and then we’d make that determination again on all those factors.”

“It has nothing to do with a temporary restraining order,” Micki Trost, a state emergency operations spokesperson, says of the end date, noting that the original request for mutual aid lapsed on June 6.

"During the recent protests in the area of the State Capitol," reports Sergeant Blake White, a spokesman for the CSP, "the Colorado State Patrol utilized less-lethal (like pepper balls, sponge rounds, paintball markers, and tear gas) options to protect life and property when riot or otherwise unlawful conditions existed. The Colorado State Patrol utilizes a chain of command that requires supervisor approval prior to utilizing less lethal options and this structure was in place and utilized by our members serving the Capitol Complex. This was used between the evening of May 28, 2020, and the early morning hours of June 1, 2020."

Commerce City Police Department (shares a SWAT Team with Brighton)
May 30 through June 1. The DPD did not ask for further assistance after June 1, according to a Commerce City spokesperson.

"The Denver Sheriff Department will operate under DPD’s use of force policy as an assisting agency per the federal order issued last weekend," says Daria Serna, spokesperson for the department.

Douglas County Sheriff's Office
May 30 through June 1 and June 6 through June 7. The office does not say why its deputies stuck around Denver after the judge's order.

Lakewood Police Department
May 30 and June 1. “It was DPD who determined they no longer needed our assistance,” says John Romero, a Lakewood police spokesperson.

Wheat Ridge Police Department
May 30. “As far as I know, we haven't been asked to come back in,” says Sara Spaulding, a spokesperson for the department.

Update: This story was updated at 6 a.m. June 13 with the additions of responses from the Denver Sheriff Department and the Colorado State Patrol.
KEEP WESTWORD FREE... Since we started Westword, it has been defined as the free, independent voice of Denver, and we'd like to keep it that way. With local media under siege, it's more important than ever for us to rally support behind funding our local journalism. You can help by participating in our "I Support" program, allowing us to keep offering readers access to our incisive coverage of local news, food and culture with no paywalls.
Make a one-time donation today for as little as $1.