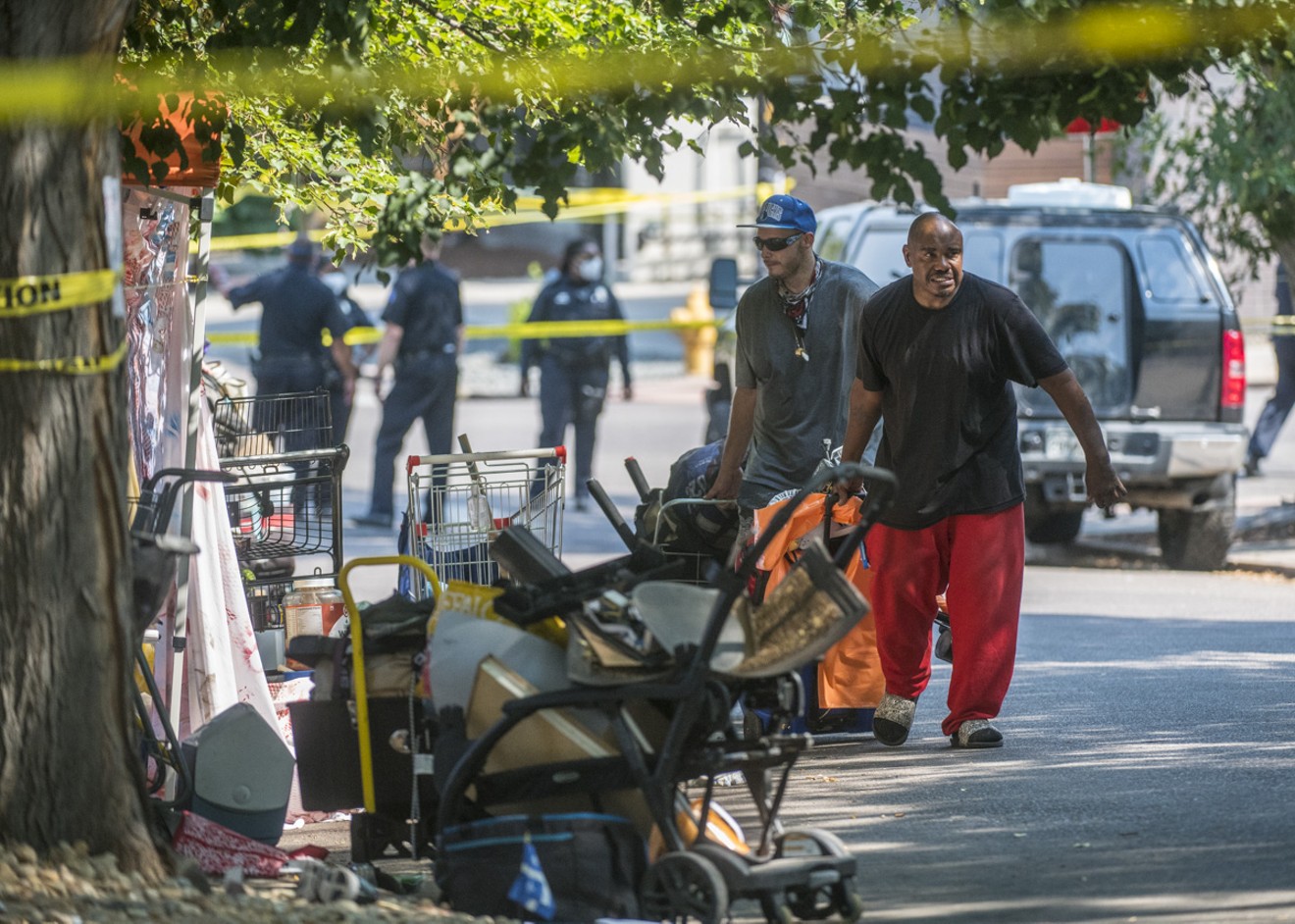 Denver is on the hot seat again over homeless encampment sweeps. Evan Semón
The City of Denver has been violating the terms of a legal settlement over homeless sweeps, according to a prominent civil rights lawyer who worked on that agreement.

"It's coming from the top that folks have carte blanche to get people out of the public space as fast as possible and by any means necessary," says Andy McNulty, a lawyer with Killmer, Lane & Newman, LLP.

On September 21, McNulty sent a letter to Mayor Michael Hancock, City Attorney Kristin Bronson and all members of Denver City Council charging that violations of the agreement "have increased in severity to the point that it is widely acknowledged among service providers and advocates that the brutality of the tactics being deployed by Denver have not been seen since before the entry of the Lyall settlement agreement. Some of these tactics have included intimidation, threats, and assault. All of the actions of Denver, its officials, and its contractors described in this letter are completely unacceptable."

In 2016, attorneys working on behalf of homeless plaintiffs filed a class-action suit in federal court related to homeless encampment sweeps; the Lyall settlement agreement was finalized in 2019.

It stated that the city, "to the extent reasonably possible, shall give at least seven days’ notice" prior to large-scale sweeps. This notice has to be written, according to the agreement, which adds that Denver could conduct large-scale sweeps with less than seven days' notice only if the city "determines that a public health or safety risk exists which requires it."

The agreement also required the city to place a 48-hour notice on unattended items rather than remove them, as long as those items did not pose a health and safety risk. Belongings taken by the city during sweeps were to be kept at a storage facility.

"Despite these explicit requirements, I have received widespread reports of Denver officials and contractors not providing any notice whatsoever prior to sweeps, providing only oral notice, providing notice that is lesser than the prescribed seven-day and forty-eight-hour notice requirements (sometimes, as little as five minutes notice), and, even when proper notice is provided, showing up early to begin sweeps prior to the time listed on the written notice," McNulty wrote, listing sixteen separate occasions since March during which the City of Denver allegedly violated these specific terms of the Lyall settlement.

Additionally, McNulty wrote that he had received "credible reports that Denver, and its contractors, discarded unhoused individuals’ property (including important identification documents, medications, and items necessary for survival outside), without even the pretense of storing it" on seventeen occasions since March.

In his letter, he also noted that he's received reports of multiple occasions when the city's storage facility was not open during the hours it is supposed to be accessible.

"The storage facility is across the street from the municipal public defenders' office and the failure of the facility to keep its hours is so prevalent that Chief Public Defender Alice Norman regularly provides the office’s own handout explaining when the facility is supposed to be open," McNulty wrote.

Many of the alleged violations of the Lyall settlement agreement have occurred since May 3, when the 10th Circuit U.S. Court of Appeals ordered that a preliminary injunction stemming from another lawsuit related to sweeps be vacated. That preliminary injunction, which was spurred by a 2020 Denver Homeless Out Loud lawsuit filed by McNulty, had essentially upped the requirements the city must abide by when sweeping encampments. Aside from requiring seven days' notice before sweeps, the preliminary injunction, penned by Judge William J. Martinez in January 2021, ordered that the City of Denver provide at least 48 hours' notice before sweeping encampments in exigent public health and safety circumstances.

The panel of three judges from the appeals court ordered that thaeruling be vacated on the grounds that the Lyall settlement precluded the homeless plaintiffs in the DHOL case from receiving a remedy. The Lyall settlement agreement had released Denver from a broad range of due-process liabilities related to homeless sweeps, two of the judges stated in their opinion.

"It seems like this pattern of intimidation and just disrespect for unhoused folks' rights is escalating, and it has been over the summer, particularly since the 10th Circuit's decision about the preliminary injunction," McNulty says.

And those incidents aren't even the worst of it, according to him.

"I have received numerous reports that, once a posted sweep is completed, the crew involved in that sweep will roam the city seeking out other encampments (that have not been posted for a sweep) to harass the encampment. This harassment almost always includes seizure of property, but it also includes verbal bullying, intimidation, and other inappropriate behavior from Denver officials and contractors.  Denver officials and contractors will tell unhoused individuals that they have five minutes to leave an area or all of their property will be seized and destroyed," McNulty wrote in the letter, asserting that specific homeless individuals have been targeted "due to personal grudges and vendettas" held by city employees.

The letter highlighted one incident in which a Denver contractor allegedly "pushed over a fence panel on an unhoused person and two advocates using a bobcat," and another in which a Denver official "threatened an advocate with a shovel while saying 'I’ll hit her.'" The "most egregious example," McNulty wrote, involved a Denver official allegedly punching a homeless individual "who does not speak English fluently and was given five minutes to pack up all of his belongings during a sweep."

"I felt like I had to do something," McNulty says. "This is the first step in doing something to make sure that Denver follows through on the settlement agreement."

Jennie Castor, Mayor Michael Hancock's press secretary, issued this statement on behalf of the mayor's office: “We have always respected and will continue to abide by the terms of the Lyall settlement and how 7-day posted large-encumbrance cleanups are conducted, including notifications and storage of belongings.

“Outside of the Lyall settlement, there are other city ordinances we continue to enforce, such as unlawful camping and trespassing. Other public safety issues and hazards are also routinely addressed, such as when fire hazards or other public safety, public health or environmental risks are present.

“Without question, we expect that all city employees treat everyone with respect. We are confident that city employees and city contractors do just that. In addition to reminding our teams about the legal parameters of the Lyall settlement, we also consistently reinforce the need to treat our unhoused residents humanely and with dignity.”