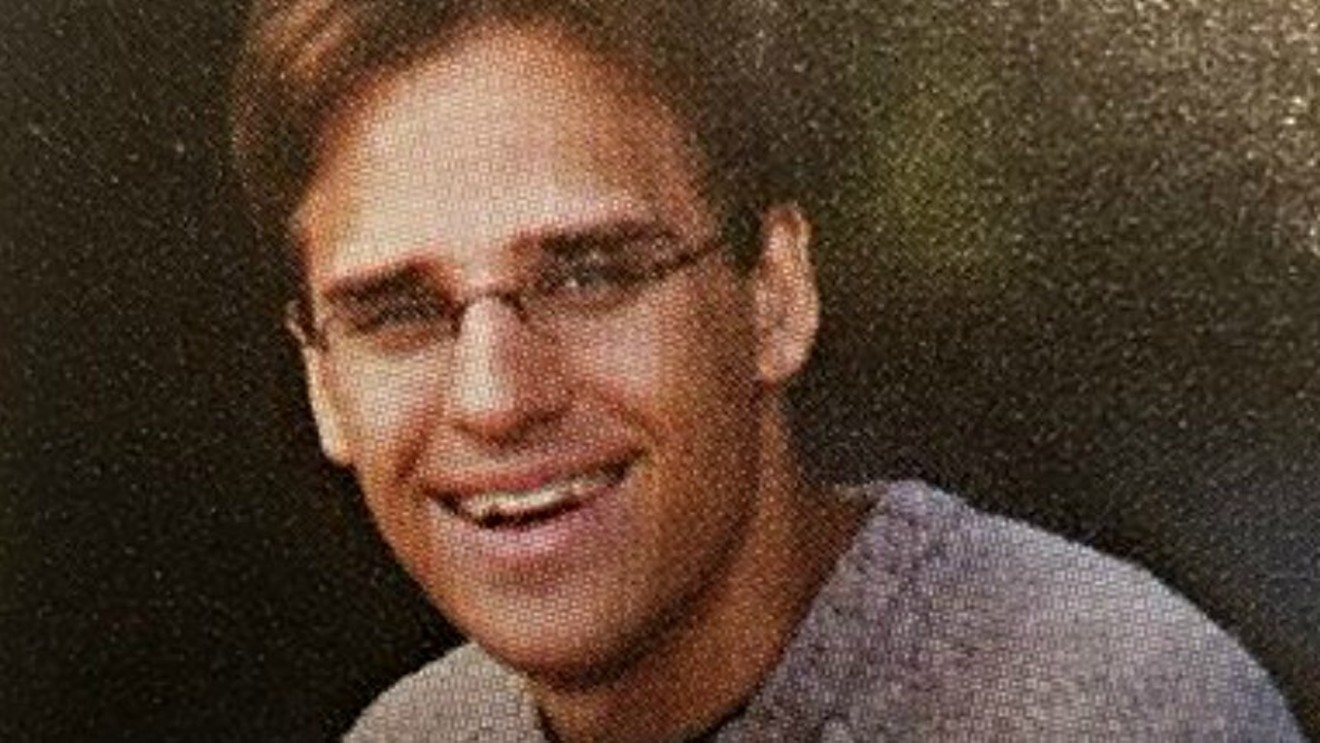 A photo of Erik Kleiber shared on Facebook after his death. Facebook
Update: The climber who fell to his death from Boulder's First Flatiron on October 26 has been identified. He was Erik Kleiber, a 31-year-old from Boulder. He's the second person to suffer a fatal fall at that location in less than three months. Services for Kleiber are pending. Continue for our previous coverage.

Original post, 5:41 a.m. October 27: Yesterday, October 26, a thus far unidentified man died after falling from Boulder's First Flatiron. He's the second person to suffer a fatal fall at this specific area in 81 days, but the Flatirons as a whole are a regular setting for emergency operations in Boulder County. Indeed, five people were rescued from the Second Flatiron just eleven days before the latest tragic accident.

We've reported about numerous Flatirons rescues over the years — and most of them have had happy endings. In May 2013, for example, we told you about an incident involving Taylor Powers, who was taken to safety following a mushroom-fueled strip tease that made national news. Austin Stevens survived a fall while on hallucinogenic drugs circa October 2014. And Jeremy Caldwell cheerfully admitted that he might have won a Darwin Award had it not been for emergency crews that plucked him off the Second Flatiron, where he spent a frightening August 2016 night. 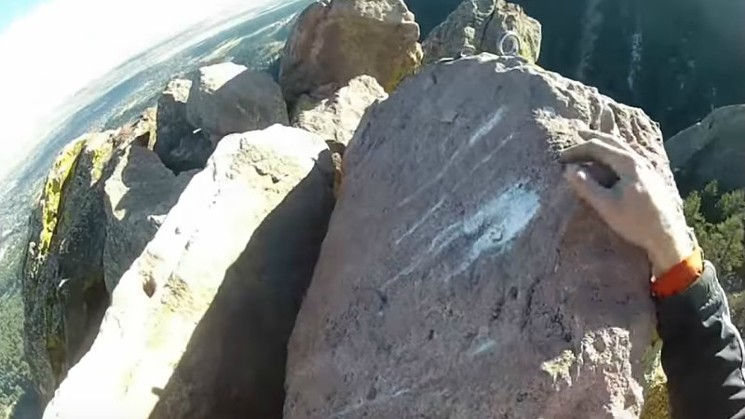 Atop Boulder's First Flatiron.
YouTube
More recently, in June 2017, our Chris Walker penned a feature article about the Rocky Mountain Rescue Group, whose founding was inspired in part by three climbing fatalities on the Third Flatiron during the winter of 1946-47.

In recent years, deaths on the Flatirons have been thankfully uncommon. Prior to this year, the last fatal fall on the First Flatiron reportedly involved Aurora's Edward Thompson, who died in 2008.

That changed at about 5:58 p.m. on August 6, when Carter Christensen, a seventeen-year-old from Minnesota, was located near the bottom of the First Flatiron. He was not breathing and had no pulse when first responders arrived, and he didn't respond to treatment.

Afterward, Christensen's family released a photo of himself he'd taken shortly before his death. 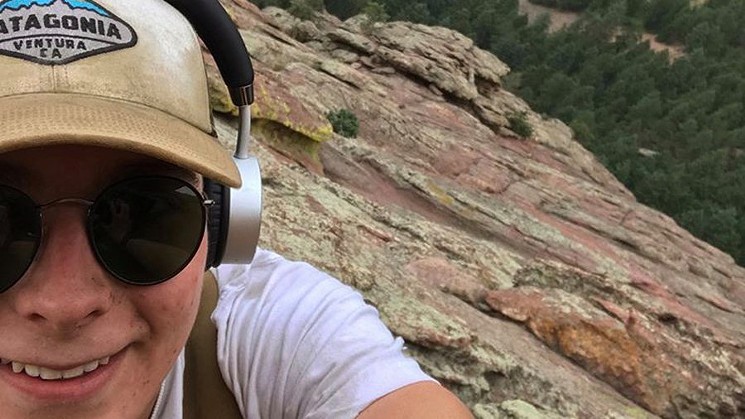 Carter Christensen took this self-portrait from Boulder's First Flatiron shortly before his fatal fall.
Family photo via Fox31
As for the latest incident, the Boulder County Sheriff's Office notes that the initial report about a fallen climber at the First Flatiron on the 26th came through at 1:08 p.m.

Multiple witnesses are said to have seen the man fall. BCSO personnel, joined by members of the Rocky Mountain Rescue Group, the Boulder Fire Department, Boulder Open Space and Mountain Parks and AMR ambulance, rushed to the locale, but they were too late. The man was pronounced dead at the scene.

Identification by the Boulder coroner's office is pending.

How often do rescues take place in the Flatirons and Boulder County in general? The Boulder County Sheriff's Office online press release archive goes back to July 2015 — just over two years — and during that period, we found a slew of accounts about rescues, with at least six in Eldorado Canyon State Park and others at places such as Boulder Canyon, Boulder Falls, Flagstaff Mountain, Fern Canyon and Paiute Peak.

In addition, there have been at least seven Flatiron rescues, and their descriptions regularly include reminders about safety. Continue for links and excerpts to all of them below, including the five-person rescue on October 15 mentioned at the top of this post. 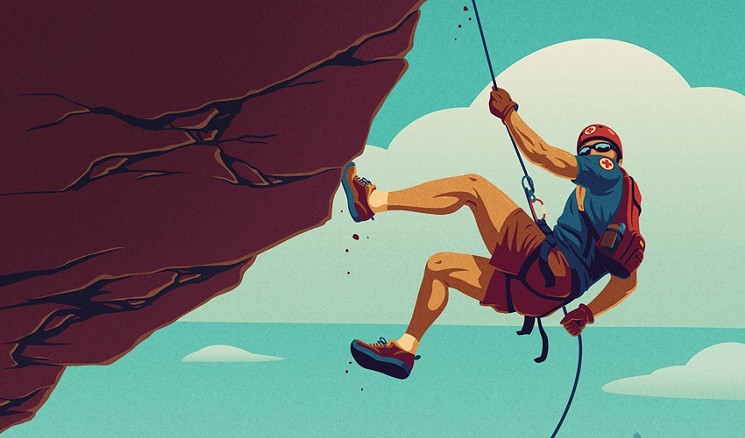 "Family of 5 rescued from 2nd Flatiron"

At approximately 2:00 pm on October 15, 2017, the Boulder County Sheriff's Office, Rocky Mountain Rescue and the Boulder Fire Department were dispatched to the 2nd Flatiron on the report of a family of 5 who had been scrambling and found themselves in a situation where they need help....

On 03-15-17 at approximately 1:34 PM, Boulder County dispatch received a 9-1-1 call reference a male party that was scrambling at the base of the First Flatiron in Chautauqua Park in the City of Boulder Open Space. The male, identified as Bikrum Sehgal, had fallen approximately 10-15 feet and injured his lower leg and complained of a head injury. Members from the City of Boulder Fire Department, City of Boulder Open Space and Mountain Parks, American Medical Response (AMR), Rocky Mountain Rescue Group (RMR), and the Boulder County Sheriff’s Office responded to the scene to assist. Rescuers and Paramedics assisted Mr. Sehgal as he walked out on his own power....

On Saturday, October 15, 2016 at approximately 8:55 a.m., the Boulder County Communications Center received a 911 call from a 19-year old male advising he had fallen, injured his ankle and was needing medical assistance. The male party told Boulder County Communication that he was hiking off trail between the First and Second Flatiron. Fortunately the Hiker was able to provide his GPS location to rescuers....

A rock climber, 36-year-old Jeremy Cadwell, from Lakewood, Colorado, was rescued this morning from the second flatiron. Cadwell was scrambling around the second flatiron yesterday evening when he became unable to descend on his own. He attempted to contact friends via text message overnight, but the messages were not received until this morning. He spent the night stranded in the City of Boulder Mountain Parks and Open Space property. Cadwell contacted our dispatch communications center this morning at 7:39 a.m. requesting assistance....

"16yo Hiker Rescued From Trail by 2nd Flatiron"

On Friday, 29 July 2016 at approximately 8:20pm, the Boulder County Communications Center received a 911 call from a 16-year-old female advising she needed assistance. She told dispatchers that she had gone hiking by herself up towards the 2nd Flatiron and that she had wandered off the trail by accident. After walking down a steep hill and sliding around a couple of large boulders, she realized she was not on the trail anymore. Afraid to slide back around the boulders, she called 911. Fortunately, she had a GPS-enabled cell phone and was able to provide her precise location to rescuers....

"Climbers Rescued From Top of 1st Flatiron in Overnight Rescue"

On Thursday, 12 May 2016 at approximately 10:24pm, the Boulder County Communications Center received a call from an individual who stated that he had received a text message at around 9:10pm from a party saying she was stuck at the top of the 1st Flatiron. Personnel from the Boulder County Sheriff’s Office, Boulder Fire Department, American Medical Response, and Rocky Mountain Rescue Group responded to assist. Rescuers quickly made it to the top of the 1st Flatiron, where they made contact with three climbers. They were described as experienced climbers, but were uncomfortable finding their way down the rock face in the dark. Rescuers were able to setup a technical rescue and evacuate the climbers down the 1st Flatiron to safety. The climbers, Gretchen Abbott, 21, of Denver; Jacob Warren, 22, from Kentucky; and Kyle Ayres, 30, also from Kentucky, were uninjured. The incident concluded at approximately 3:00am on Friday, 13 May 2016....

"Injured Hiker at the Boulder Flatirons"

On July 27, 2015 at 10:41 am, the Boulder County Sheriff's Office, Rocky Mountain Rescue, Boulder Fire Department, AMR Ambulance and City of Boulder Park Rangers responded to the Royal Arch Trail on the report of an injured hiker/climber. Madeline Hicks (18), a University of Colorado student was hiking with her boyfriend when she slipped, fell and sustained an ankle and head injury. Madeline was carried back to the Bluebell Shelter and transported to Boulder Community Hospital....