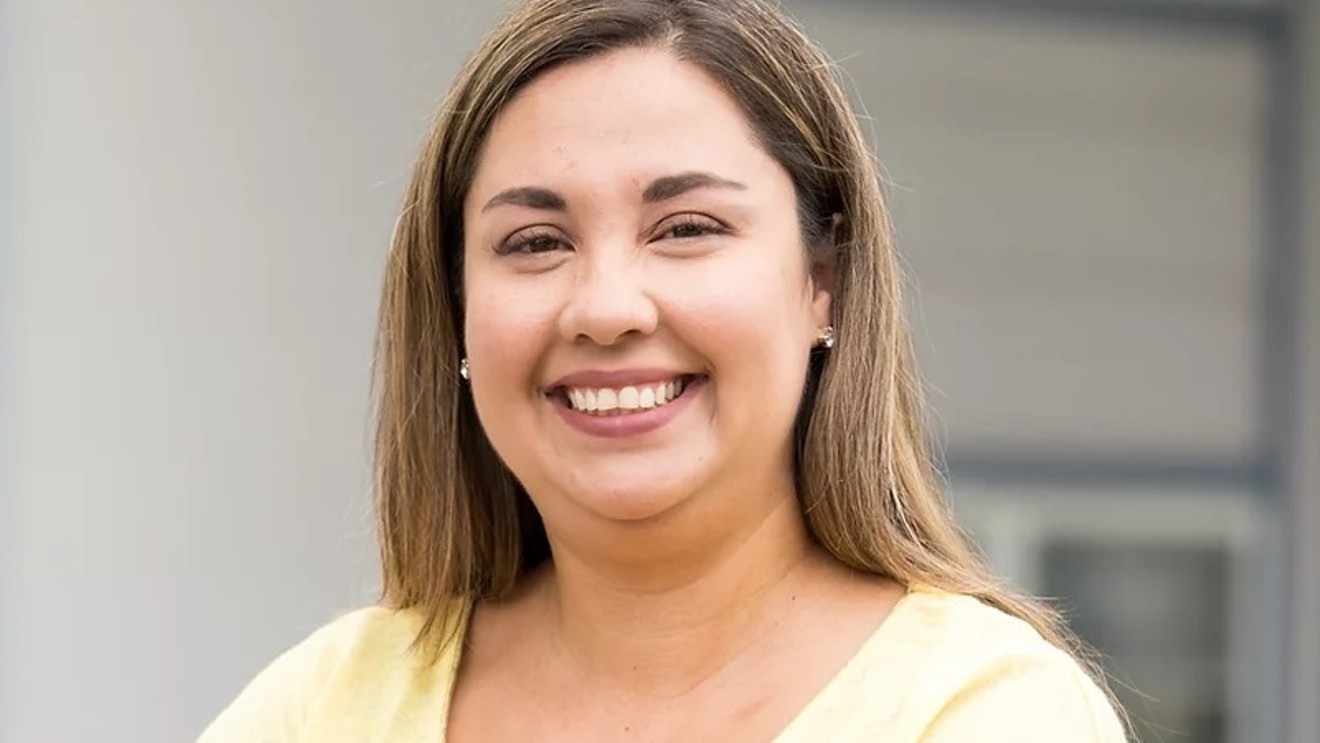 A portrait of Yadira Caraveo. caraveoforcongress.com
Voting is now underway in the June 28 primary, and the battle is fierce on the Republican side in Colorado's new 8th Congressional District, where four candidates are vying for their party's blessing: former Green Beret Tyler Allcorn, Senator Barbara Kirkmeyer, Thornton Mayor Jan Kulmann and Weld County Commissioner Lori Saine.

There's far less suspense on the Democratic side, since Representative Dr. Yadira Caraveo has already secured the nomination. But she's hardly waiting around to find out who she'll be running against. "What I'm doing, and what I want to do for the next many months, is continuing to have one-on-one conversations with voters and going to house parties and making sure people understand what their options are going to be in November," she says.

Caraveo's path toward politics was circuitous.

"I was born and raised here in Colorado," she relates. "My parents moved here from Mexico in the ’70s, knowing that they'd be able to do more for their future family here. They put a big emphasis on education, and when I was three years old, I told them I wanted to be a doctor. That was it. I never said anything else."

Years later, after attending public schools in Adams County and earning degrees from Regis University and the University of Colorado medical school, she served as a resident at the University of New Mexico in Albuquerque. "I decided to go into pediatrics, and they had a program that authorized advocacy, where kids could advocate for themselves," she notes.

The residency program "was unionized — part of the SEIU [Services Employees International Union]," Caraveo continues, "and I ran to be a union delegate. I got to be a policy advocate around the Affordable Care Act when it was coming up and worked with a group of concerned scientists talking about pollution levels. I even got to go to the Obama White House and received an award." It designated her as a "Champion of Change."

Nonetheless, Caraveo stresses, "I thought I was going to be a practicing pediatrician for the rest of my life, taking care of kids on Medicaid — 65 percent of the kids in my practice were on Medicaid — and doing some advocacy and volunteering around that."

The 2016 election changed her way of thinking. "After that, I got more involved in local politics," she recalls, "because I was so frustrated about issues around my clinic that no one seemed to have answers for, like the high cost of prescriptions and the number of families who were homeless and living in their cars."

When a Colorado House of Representatives seat opened up in 2018 in the 31st district, which includes much of Thornton, Caraveo realized that "I was in the right place at the right time. I had some people ask me about running, and I thought that after a couple of years of complaining, I would give it a try."

Her bid was successful, and after taking part in the 2019 legislative session, "I remember thinking that I'd accomplished more in four months than I could have in decades as a pediatrician," Caraveo recalls. "I worked on paid sick days, getting paid family leave on the ballot, setting up a prescription authority board to make sure we could put a limit on the most expensive medicines — all sorts of things I would never have envisioned when I went to medical school." 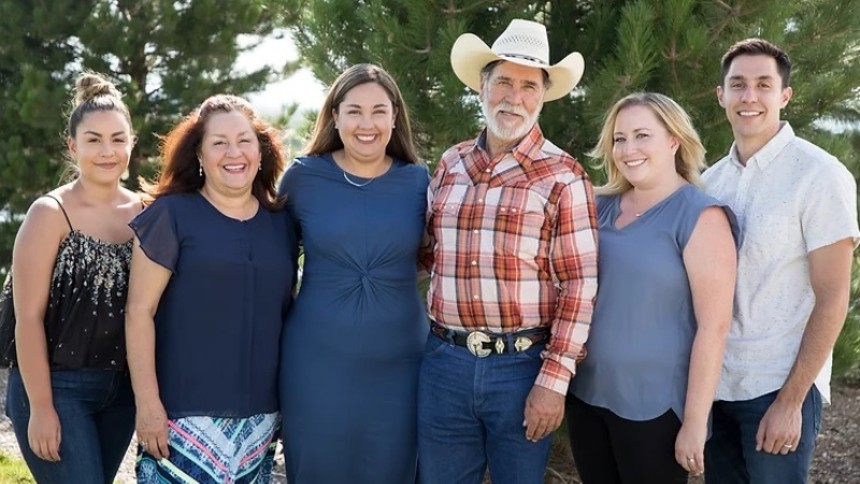 Yadira Caraveo with members of her family.
caraveoforcongress.com
Still, she acknowledges that "there are limits of what you can do in a state legislature, particularly around health care and pricing. So when the new 8th Congressional District was drawn, and it included where I grew up and where I'd been taking care of patients for ten years, and when I realized I could be the first Latina to represent Colorado in Congress, running seemed like a continuation of the work that I was doing in the state legislature."

Getting things done in Washington, D.C., is likely to prove much more difficult than in Colorado, though. While Democrats nominally control both the U.S. House of Representatives and the U.S. Senate, the margins are much narrower than they are here, and experts believe Republicans have an excellent chance of gaining seats in both chambers during the midyear election. Moreover, Caraveo points out, "In Colorado, we have the GAVEL Amendment [Give a Vote to Every Legislator] that makes sure everyone's bills get heard and get an up-or-down vote, at least in committee. We pass around 500 bills every year, which is not necessarily the case in Congress."

Caraveo adds: "I feel like we need more people in Congress who know how to talk across the aisle and spectrum of their party to get legislation done, and not just having a bill you introduced be a statement that doesn't actually have a chance of becoming law. My legislation has been bipartisan, and even on big bills that have passed, I've been able to have conversations with groups across the board. I think that's something that needs to happen in Washington — and I also think there should be more people with a working-class background. I grew up watching my dad work construction, and he taught me to do your job to the best of your ability and help people before they ask for help. We need more people following that approach in Washington, too."

Beyond health care, Caraveo's biggest issues include the cost of living and climate change, with a particular focus on the disproportionate impacts felt by those who live in marginalized communities. "Until I was in the second grade, I grew up in the Elyria-Swansea area, which is downwind of Suncor," she says, referring to the controversial oil refinery in Commerce City. "And as a doctor, I dealt with issues of asthma and other chronic health issues in children that were tied to the areas where they lived. If you're poor, you're more likely to grow up in areas that are highly polluted, and that's led to kids with horrible asthma that's hard to control and made even more difficult because a lot of them have difficulty accessing health care. And with so many issues around wildfires in recent years, Coloradans realize that climate change is affecting everyone's life and health."

Another major concern is fentanyl, and Republican hopefuls such as Tyler Allcorn have attacked Caraveo for supporting 2019's HB19-1263, which made "possession of 4 grams or less of a controlled substance listed in schedule I or II a level 1 drug misdemeanor." This year's fentanyl bill, which Caraveo also backed, makes possessing just 1 gram of the substance a felony, but some progressive critics have complained about a section that allows prosecutors to target people who didn't know fentanyl had been mixed with another drug. While Caraveo concedes that the measure "isn't perfect," she says that it strikes a balance between "going after those who are distributing and targeting our communities with helping people who need treatment and access to testing strips and programs to help them get through addiction. So we're not just penalizing, but helping people through a crisis."

Another challenge for Caraveo will be getting the substantial number of Latinx residents in the 8th Congressional District to participate in a midyear election, particularly since most of them have previously lived in Republican-controlled areas.

"We are spending a lot of time reaching out to those voters," she notes. "This is a low turnout, low registration area of the state, and I think that has to do with the fact that they haven't had someone who speaks to them and their community for a long time. We're letting them know they're in a new district, a competitive district, and even though your voice always mattered, it definitely matters now, because you can vote for someone who speaks for you. That's why we're reaching out to groups in the Latino community and people who may not have voted frequently before because they didn't feel represented. And now they can be."
KEEP WESTWORD FREE... Since we started Westword, it has been defined as the free, independent voice of Denver, and we'd like to keep it that way. With local media under siege, it's more important than ever for us to rally support behind funding our local journalism. You can help by participating in our "I Support" program, allowing us to keep offering readers access to our incisive coverage of local news, food and culture with no paywalls.
Make a one-time donation today for as little as $1.