Michael Hancock Sexy Text Fallout: The Post Versus the Pimp 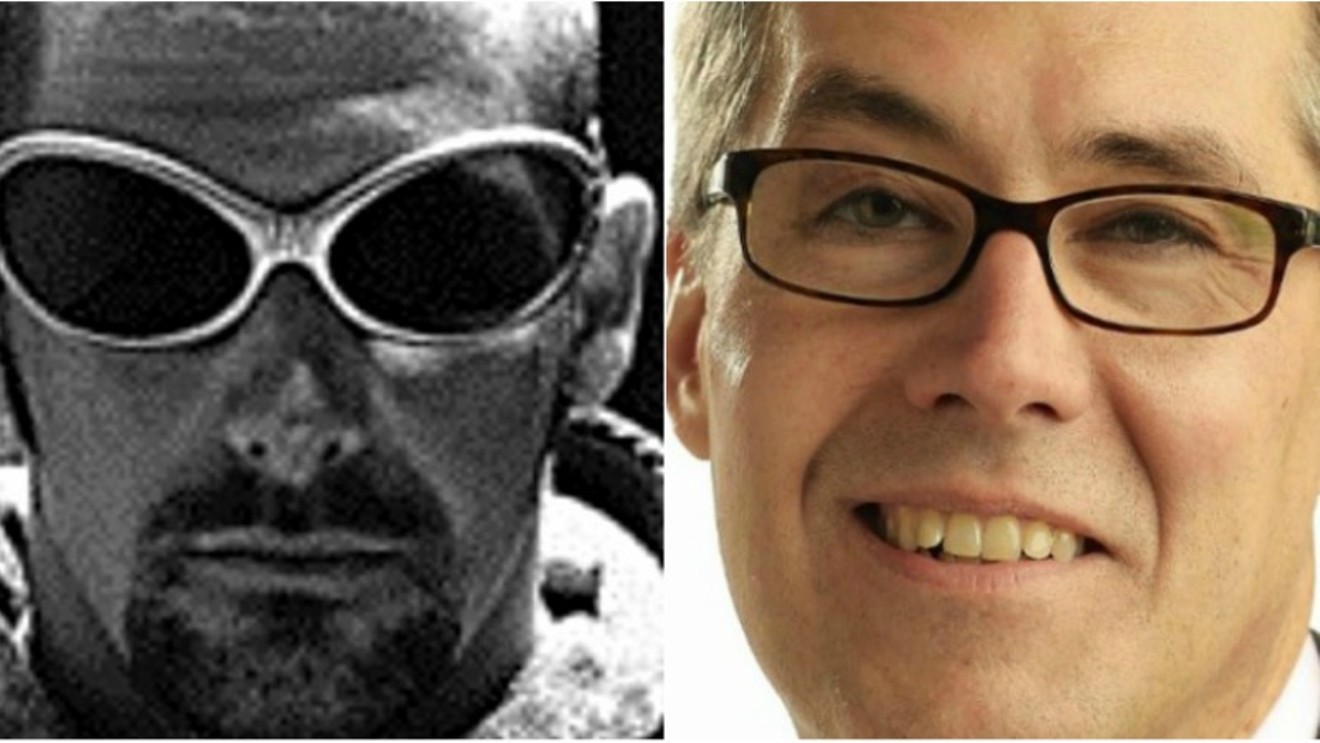 A vintage photo of Scottie Ewing and a more recent portrait of Denver Post editorial-page editor Chuck Plunkett. File photo/Twitter
Denver City Councilman Rafael Espinoza has asked for an independent investigation of Denver Mayor Michael Hancock following his video apology for sending inappropriate texts to Denver police officer Leslie Branch-Wise in 2011 and 2012, when she was on his security detail. But the controversy has also sparked renewed interest in stories from that same period suggesting that Hancock had been a client of the Denver Players/Denver Sugar prostitution ring, originally headed by former professional skier Scottie Ewing.

The latter tale got another workout yesterday, March 12, when Ewing took to the local airwaves to attack a weekend column by Chuck Plunkett, the Denver Post's editorial-page editor. Plunkett had co-starred alongside Ewing in a recently broadcast recording from the period when the newspaper was investigating the Hancock claims. In the piece, Plunkett called Ewing a "professional liar" while detailing the Post's investigative process, and in conversation with KNUS talk-show host Peter Boyles and me, Ewing returned the favor.

To questions about Ewing's comments, Plunkett, corresponding via email, wrote that he would let the column, headlined "The So-Called Denver Post 'Handcock' Cover-up," speak for itself.

The aforementioned Ewing-Plunkett recording was made in June 2011 and can be heard on a podcast of Boyles's March 7 program beginning around the 27-minute mark. Its subject: questions about whether the Denver Police Department, then headed by Chief Gerry Whitman, possessed images showing Hancock entering Denver Sugar, at 1675 Fillmore Street. A misspelled variation on his name — "Mike Handcock" — had shown up on a Denver Players/Denver Sugar client list, alongside Hancock's cell phone number.

In the recording, Plunkett, then a Post reporter, tells Ewing, "Bruce James, who's a very powerful attorney for the Brownstein firm, a managing partner, at 5:22 p.m. on Friday, June 3 — that's last Friday, the same time we were asking for documents — he wrote a letter to Chief Whitman on Michael Hancock's behalf, saying, 'We request any videotapes, photographs, any evidence of such that shows Michael Hancock entering or leaving 1675 Fillmore or his vehicle at or near the address and/or photos or video of his license plates at that facility.'"

James "explains that it's not a criminal matter," Plunkett goes on, "so if that kind of material exists, it wouldn't hurt the public record if it came into Hancock's possession. 'It is without coincidence that this request mirrors the request you received from 9News today' — we were on that same request. 'We believe the story they are investigating is completely without merit and are anxious to prove that the rumors about his presence at 1675 Fillmore are absolutely false. However, under no circumstances are we authorizing or consenting to the release of the requested material directly to 9News and we hereby object to their request. All of the requested materials should be delivered directly to me as counsel for Mr. Hancock. Thank you very much, Bruce James, managing partner.'"

Leslie Branch-Wise, now a Denver police detective, and Mayor Michael Hancock in a video apology from earlier this month.
Denver7/YouTube
After a pause, Plunkett offers his view about the letter, noting that "literally in one breath, they're saying, 'We're going to cooperate with the news media and make everything available and be fully transparent.' And in the next breath, they're laying the groundwork for collecting evidence and keeping it in their office."

On that broadcast and others, Boyles has portrayed the recording as evidence that the Post buckled to pressure from powerful forces to kill the story — an assertion Plunkett tackles in his column by way of supplying answers to two questions: "Did the mayor, during his days on the Denver City Council, become a client of the former escort services known as Denver Players and Denver Sugar? Did The Denver Post suppress the truth?"

In his answers, Plunkett stresses how much effort he and other journalists at the Post put into researching the allegations, only to eventually conclude that the claims lacked "corroboration by magnitudes, and their timing and delivery" — only days before the mayoral run-off election that elevated Hancock to his current position — "bear the hallmarks of political dirty tricks of the most vicious variety."

About Ewing, Plunkett writes, "While he’s a charming and highly intelligent man, Ewing is also a criminal. He was then under house arrest after agreeing to a plea deal to pay more than $77,000 on tax charges stemming from his illegal businesses. He had issues with the City Council. As I told Ewing, while riding in his Lotus to complete review of the records stash, we would have to be able to verify his claims independently. After all, he was, by definition, a professional liar, and quite clever in the dark arts of subterfuge."

Plunkett doesn't directly accuse Ewing of making up the entire scenario, or of conspiring with others to do so. But he emphasizes Hancock's denials, as well as the mayor's assertion that "hundreds of people knew and could have used his cell phone number to set up the account." And although Plunkett acknowledges that an escort who worked for Ewing accurately identified Hancock from a photo lineup, she said he was a person of average height. "No one who knows our mayor would describe him so," Plunkett maintains.

He adds that "early on something awfully convenient occurred. Ewing reported that someone broke into his home and stole all those records that had us working so hard. Within days he told police just to drop investigating the theft."

An image from the Denver Sugar website, which is no longer online.
File photo
The Post did some dropping of its own shortly thereafter. The paper published a piece labeled "Mayor-Elect Hancock Backs Off Vow to Release Full Records to Dispute Link to Prostitution," but subsequently reported that nothing incriminating was found in Hancock's cell phone records. After that determination, the story faded away.

The column implies that Plunkett wasn't happy about this outcome at the time — as does Ewing, who recalled a conversation with the reporter to that effect (and alluded to a possible recording of that chat, too). "Did I agree with every decision from our leadership?" Plunkett asks. "Have I ever? The struggle between reporters tasked with finding good stories and editors tasked with vetting them is often intense." But in retrospect, he goes on, "my take is that our actions were and are defensible. ... No one to date has satisfactorily shown our mayor to have been a client of Ewing’s escort services. Lots of loose talk can be entertaining, politically advantageous and economically profitable, but it’s not and should never be a hallmark of professional journalism. Whether we got it right or failed, The Denver Post did its best to adhere to that ideal."

As for Ewing, he said his credibility had been vouched for by the justice system, which had given him what he termed a very generous plea deal thanks to his cooperation in the Denver Players/Denver Sugar investigation. He also shrugged off a line from a June 10, 2011, Westword post — "In an e-mail to Westword's Patricia Calhoun yesterday, [Ewing] admitted that he lied to KHOW talk-show host Peter Boyles about placing reportedly stolen records pertaining to Denver Players in a secure location 'because I was sick of interviews and showing them'" — by characterizing his comment back then as less a blatant falsehood than a strategy to convince thieves they'd gotten all the good stuff when he still had plenty of other material.

Ewing stated that he won't release lists of client names in his possession based on negative repercussions over a 2015 data dump from Ashley Madison, a website that promotes extramarital hookups; afterward, a few unmasked clients reportedly committed suicide. But he emphasizes that he wasn't seeking attention in regard to Hancock and Denver Players/Denver Sugar, saying he repeatedly turned down invitations from Plunkett and others to go on the record as a source because he didn't want to screw up his plea deal.

Likewise, Ewing argues that disregarding the escort's identification of Hancock because of the inaccurate description of his height is ridiculous, since it's difficult to tell how tall individuals are when they're in bed.

Whether any of these protestations will go beyond the column's description of "loose talk" remains unclear. But the longer it goes on, the less happy we expect the man Plunkett describes as "our mayor" is likely to be, simply because it keeps not one, but two salacious stories about him in the public eye at a time when Councilman Espinoza is pushing for a sure-to-be-uncomfortable inquiry.