A screen capture from a Facebook video created in response to a Fox News post about marijuana and panhandling in Durango. Facebook
Fox News, which has a history of portraying Colorado pot smokers as apathetic morons, recently ran a piece suggesting that the Western Slope community of Durango has been overtaken by panhandlers in the wake of recreational cannabis legalization. The head of a business organization that created a Facebook video ripping the article as false says the Fox News reporter with whom he spoke seemed disinterested in any information that contradicted his conclusion that weed had put the town on the fast road to hell even though the supposed link between homelessness and cannabis has been widely discredited.

"He was very clear to me that he thought the reason we had panhandlers in our downtown was because of marijuana legalization," says Tim Walsworth, executive director of the Durango Business Improvement District, about Joseph Kolb, whose report for Fox News was headlined "Legalized marijuana turns Colorado resort town into homeless magnet." Walsworth adds, "He asked me, 'Do you concur?' And I said I did not, and I told him why. But what I told him was conveniently not included in his final story."

In his 2016 post debunking six myths about homelessness in Denver, Westword's Chris Walker listed as his first item, "Legalizing pot has caused more people to be homeless." In it, he cited a 2014 article by contributor Kristin Pazulski that undercut past Fox News anti-marijuana jeremiads, including one from The O'Reilly Factor about "Stoned Homeless in Colorado." And while a modest percentage of out-of-state newcomers reportedly tell personnel in homeless shelters that they came to Colorado because of marijuana, Kim Easton, CEO of Urban Peak, made it clear that the challenges facing most of Denver's pre-existing homeless population have nothing to do with pot. "Using marijuana does not cause homelessness," she said, adding that the primary causes of homelessness remain high rent, lack of jobs and mental-health issues.

Opinions like these don't appear in the most recent Fox News post, whose marijuana focus wasn't immediately obvious to Walsworth. He says Kolb's initial voice-mail message noted only, "I was in your town for a soccer tournament and I saw panhandlers downtown — and I was wondering, 'What's the deal?'"

A screen capture from the Fox News article.
Fox News
This question struck Walsworth as puzzling. "We've always had panhandlers, like every town does," he allows. "But he wanted to know if there was a rise and did it coincide with marijuana becoming legal. But something else was happening then — the ACLU's lawsuits about panhandling. They said passive panhandling isn't illegal, and some cities that had ordinances against passive panhandling fought them and lost. So other cities said, 'We need to change our ordinances,' and that's what Durango did."

Since then, Walsworth continues, panhandling has been more visible in Durango and throughout Colorado as "cities and businesses try to balance legal concerns with the ethics and morals of how you treat your fellow man. And those changes are much more the reason for a rise in panhandling than the legalization of marijuana. I mean, look at Grand Junction. That community didn't vote to have legal marijuana, but they have a panhandling issue — and if it's all about marijuana, why would any panhandler be there?"

Given that Walsworth shared these opinions with Kolb, too, he was floored by the resulting article. Comments about the impact of the ACLU's actions are buried beneath the grabby headline and introductory statements that portrayed Durango as a city in decline. "The picturesque town near the New Mexico border, once a vibrant, upscale community dotted with luxury hotels, is being overrun by panhandlers – thanks, in part, to the legalization of marijuana," Kolb wrote, adding, "The town suddenly became a haven for recreational pot users, drawing in transients, panhandlers and a large number of homeless drug addicts, according to officials and business owners."

This last statement is especially shaky. One panhandler, the owner of a gift shop and a hotel clerk speaking anonymously reinforce the supposed causal relationship between marijuana and homeless, while others decline to sign on to the notion, including Walsworth and Durango's police chief. 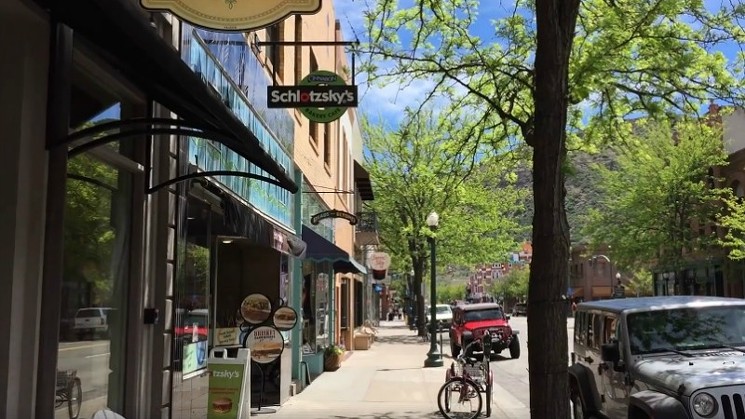 Another image from the response video.
Facebook
Nonetheless, the impact of the article on Durango was immediate and negative, Walsworth reveals. "We fielded questions from people for about 48 hours straight," he says, "and the tenor of most of the calls was, 'We're planning a trip to Durango and we want to bring our family there. Should I bring them or not?'"

Walsworth doesn't know how many of those who reached out to his organization decided not to visit Durango because of the Fox News article, "but tourism accounts for essentially half of the annual spend in our county. It's a big driver of local economies. So we were rightfully concerned."

That's why the Durango Business Improvement District decided to make a Facebook video countering the Fox News narrative. The results are on view below, and they have been widely seen. At this writing, the number of views has exceeded 80,000, making it the most successful video ever on the district's page.

The reaction has been heartening for Walsworth, who estimates that of the homeless people in Durango, "about twenty of them are causing us problems — and we're trying to figure out how to help them, and what legal tools we can use that might allow us to address their bad behavior. But we have a heart."