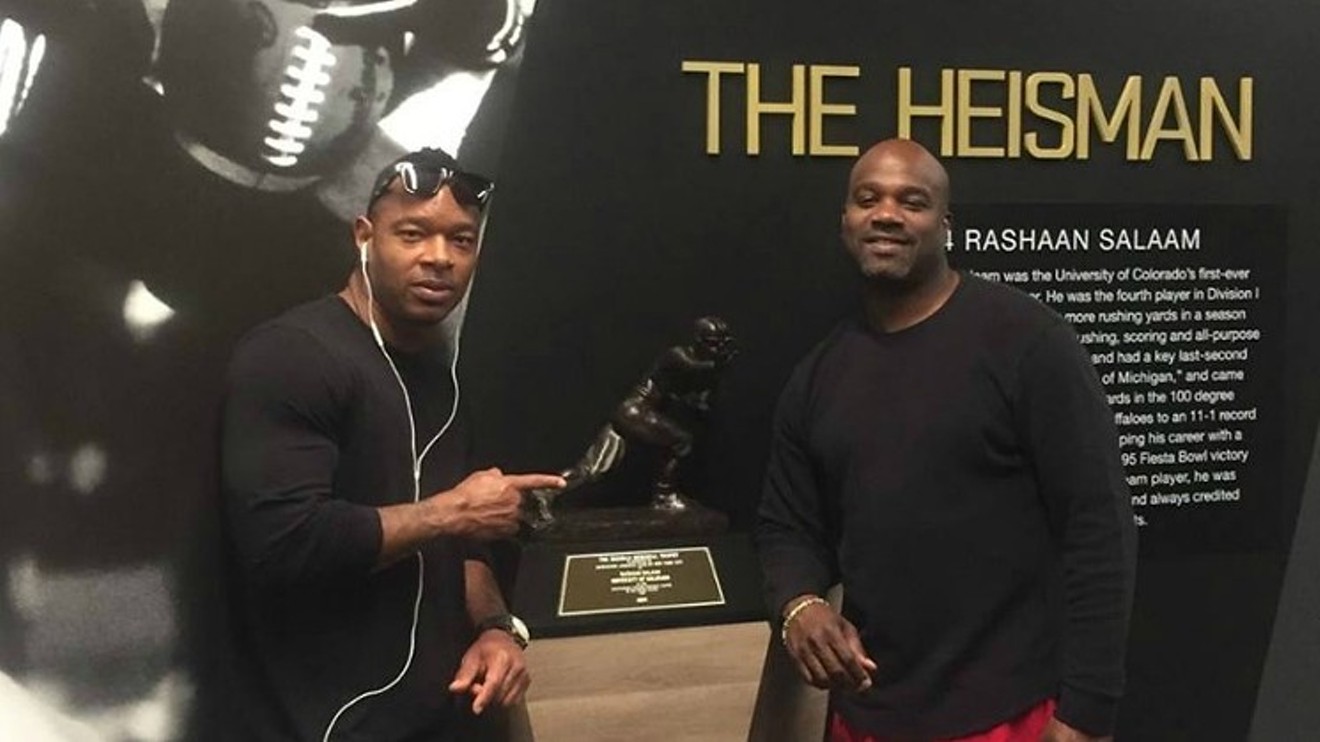 Rashaan Salaam, right, posing with his Heisman Trophy in a photo he shared on his Facebook page in April 2016, several months before he took his own life. Facebook
Today, January 8, bidding begins on the 1994 Heisman Trophy awarded to the late CU Boulder star Rashaan Salaam, who killed himself in a Boulder park circa December 2016. Salaam's brain wasn't tested for signs of chronic traumatic encephalopathy, or CTE, a brain disease associated with former football players, some of whom have met tragic ends, because of religious reasons. However, a portion of the trophy sale's proceeds is being set aside for CTE research.

As we've reported, CTE is defined as a "progressive degenerative disease of the brain found in people with a history of repetitive brain trauma, including symptomatic concussions." In 2015, Frontline reported that a staggering 96 percent of former NFL players whose autopsy results were examined in a Department of Veterans Affairs/Boston University study showed signs of CTE — and Salaam played in the league for four years after leaving CU, beginning with the Chicago Bears. Moreover, numerous players with CTE have committed suicide — most famously, San Diego Chargers superstar Junior Seau.

Among other possible factors in Salaam's final act were his disappointing professional career and difficult after-sports life — one marked by financial troubles so severe that he actually auctioned off his Heisman Trophy ring in 2011.

In addition, Salaam is said to have sold the trophy itself to a sports memorabilia business for an undisclosed price in 2013. The current owner, who obtained the trophy through that dealer, is the one putting the trophy up for auction.

Salaam left CU following his Heisman win, which took place in 1994, when he was a junior — and he had a fairly noteworthy first season for the Bears, setting a rookie record by gaining 1,074 yards. He also scored ten touchdowns.

A graphic from SCP Auctions, which is taking bids for the trophy beginning today, January 8.
SCP Auctions
But things went downhill from there, and in a 2014 profile by the Chicago Tribune, Salaam took personal responsibility.

"I didn't realize coming up how much work you had to put in once you got to the NFL," he told the paper. "It's a whole different lifestyle. You have to change the way you live. You have to change who you hang out with. You have to totally get focused on your game. You have the athletic ability, but if you don't put the work behind it, nothing will come from it."

In his view, "My whole life, up until the Chicago Bears...everything was perfect. You know, (high school) Parade All-American, Heisman Trophy winner.... So I was bound to go through some challenges. Going to the pros at twenty years old and not being disciplined...it showed itself."

Indeed it did. An account of his career notes that Salaam washed out with the Bears, played a single game with the Cleveland Browns and failed to catch on with the Oakland Raiders, San Francisco 49ers and Detroit Lions. He briefly played in the XFL, a rival pro league, and signed in 2004 with the Toronto Argonauts of the Canadian Football League. Just three months later, he was suspended, and no more on-field opportunities presented themselves afterward.

A photo from the home page of the Rashaan Salaam S.P.I.N. Foundation.
File photo
In the years that followed, Salaam got involved with a mixed-martial-arts venture called Art of War; he sold his ring in a failed effort to keep the enterprise aloft. From there, he started the Denver-based Rashaan Salaam S.P.I.N. Foundation. On the now-defunct organization's website, Salaam described it like so:


The goal of my foundation is to assist local children toward success. Throughout my life, I have found ethics, leadership and goal setting to be lacking in today’s education system. I would like to help kids, on their way to adulthood, make the right choices for their individual futures.

Life can present many obstacles and difficult decisions at any age, but especially as a young person. I would like to be the guide for our youth, to help them make the critical decisions that will affect their entire lives.

The funds raised by my foundation this year will be allocated to programs to help young athletes and children at a crossroad. Eventually, I would also like to provide scholarship funds and expand to help as many as is possible.

I appreciate any and all of your support for my foundation as I work toward impacting the youth of Colorado.

Salaam's Facebook page didn't give any indication of depression prior to his death. Indeed, his final post, shared on November 27, was a video of Whitney Houston, Luther Vandross, Dionne Warwick and Stevie Wonder singing "That's What Friends Are For." He noted that he was "feeling joyful" and added the caption "Keep smiling."

Bidding for Salaam's Heisman continues through January 20, and organizers think it could go for as much as $300,000. For more details, visit the SCP Auctions website.