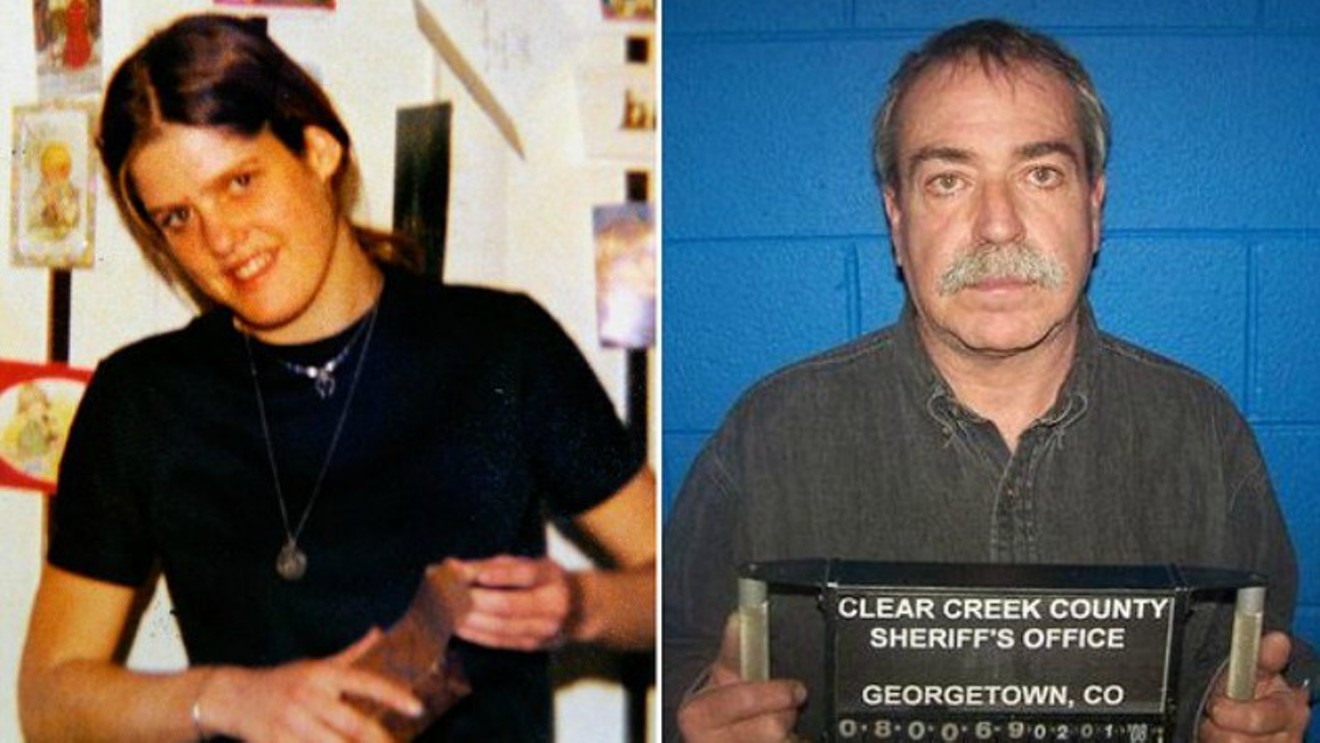 A family photo of Holly Andrews and a 2008 booking photo of Ricky Lee Harnish. Family photo/File photo
Tammy Lani is angry and frightened.

Last week, Ricky Lee Harnish, the man convicted of killing Lani's sister, Holly Andrews, when she was just sixteen years old, became a free man. He's out of prison after just nine years "without parole or registration or anything," she reveals.

To make matters worse, Lani has heard rumors that Harnish is back in Littleton, where she lives. "I could run into him in the grocery store," she says, adding, "I'll probably start carrying a gun just in case. I don't know what he's capable of doing. He knows where we're at, but we don't know where he's at."

It took a long time for Harnish to get any punishment for what he did to Andrews. She was murdered just after Christmas 1976, but he wasn't convicted until late 2009, nearly 33 years later. Moreover, the plea bargain for confessing to second-degree murder netted him just a ten-to-24-year sentence that Andrews's family members have always considered offensively low given the shocking nature of the crime. According to Rebecca Rhees, Lani's daughter, "He raped her after she was dead. He's sick."

That Harnish hit the streets after less than the minimum stretch he was supposed to serve compounds the pain and concern Lani is feeling. And she stresses that Andrews wasn't Harnish's only victim.

"It just changed everyone's life in my whole family — even my kids, even kids who weren't born yet," Lani says. "And it goes on down the line."

Holly Andrews's murder was originally thought to have been committed by serial killer Henry Lee Lucas.
UK Daily Mail.
The first time Lani talked about Andrews in this space was in 2001, for "Ghost Story," a feature by journalist  Megan Hall that makes no mention of Harnish. Instead, the article focuses on infamous serial killer Henry Lee Lucas, who falsely claimed to have killed Andrews.

On December 26, 1976, Hall recounted, Andrews left her mother's house in Littleton to visit a friend. Witnesses later said they saw her hitchhiking near the intersection of Belleview and Broadway in Englewood around 5:30 that evening, and another relative recalled seeing her in the vicinity of her father's home a few hours later. But when she hadn't returned by the next day, her stepfather filed a police report, suspecting that she'd run away.

The truth was far more disturbing. On the 27th, two cross-country skiers found Andrews's body on a cliff outside of Bakersfield, near Georgetown. She had seven stab wounds — one in the chest, six in the back — and had been sexually assaulted. When her remains were discovered, she was wearing only blue knee socks.

No arrests were made in the immediate aftermath of Andrews's death — but in 1983, Lucas entered the picture. During the early part of that decade, he claimed to have killed hundreds upon hundreds of people, including at least thirteen in Colorado, and one macabre yarn he spun, about raping and fatally stabbing a teenage girl and dumping her corpse off Interstate 70 west of Denver, made one Colorado Bureau of Investigation agent think of the Andrews case. When Lucas seemed to get other details of the crime right, too, he was formally charged with causing her death.

But the confession was bogus, and it wasn't the only one of its kind. While Lucas was undeniably lethal, having been found guilty of committing eleven homicides, authorities concluded that he'd spent years making up bloody stories with a goal of going down in history as the most prolific slayer of all time. And scientific testing eventually proved that he had nothing to do with taking Andrews's life; his DNA didn't match semen found on her body.

Harnish's did — but rather than going to trial and hoping that this evidence would be enough to put him behind bars, prosecutors made a deal, offering to drop any reference to sexual assault and lower the charges against him to second-degree murder if he would plead guilty.

A portrait of Holly Andrews.
Family photo via the Denver Post
"It was a joke," Lani says. "They traded first-degree murder for second-degree murder, and they said the family agreed to it — but we never agreed to that. I wanted them to get him on kidnapping so he would have to do life. But they took everything out."

Back in 2009, Linda Andrews, wife of Holly's brother, Dave, told us that prosecutors tried to make the family feel better by suggesting that Harnish was in declining health because of hepatitis C and diabetes and likely wouldn't live to complete his sentence. But in her words, "We don't care if he dies the day after he's incarcerated. Why should we downgrade Holly's life like that? Who would accept that — especially someone who's lost a sister?" Today, Harnish remains among the living, unlike Holly Andrews and her mother, whom Rhees says was never the same after the murder. "It just destroyed her," she says. "We couldn't see her on Christmas. She would come over drunk. She died at the age of 55 before she even knew that Ricky Lee Harnish did it. I was born in 1983, so I never knew Holly — but I didn't get to have my nice grandma, either. She was mad all the time, and then she died. He killed her, too." Lani is just as upset by the Colorado justice system.

Until then, she'll continue to worry every time she goes to a supermarket about seeing Ricky Lee Harnish.
KEEP WESTWORD FREE... Since we started Westword, it has been defined as the free, independent voice of Denver, and we'd like to keep it that way. With local media under siege, it's more important than ever for us to rally support behind funding our local journalism. You can help by participating in our "I Support" program, allowing us to keep offering readers access to our incisive coverage of local news, food and culture with no paywalls.
Make a one-time donation today for as little as $1.