The new, easy-access design for stalls in the men's restroom at Union Station's underground bus terminal. Chris Walker
Should you find yourself heeding nature's call any time soon in the women's or men's restroom in RTD's Union Station bus concourse, be prepared to cross your legs extra tight, because the stall doors have been removed.

That trickle of news came in this week when a Westword source mentioned her surprise at visiting the underground women's restroom in the bus terminal and finding that her private business wouldn't be, well, so private. Westword, of course, did its own deep dive to investigate the missing stall doors. On December 14, we verified that the stalls in the underground men's restroom in the bus terminal had also become a bit more breezy — and the removal of the doors seemed intentional. 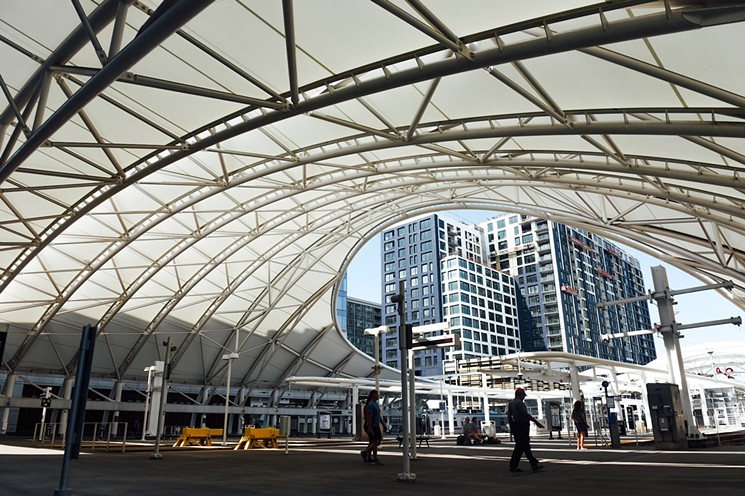 The restrooms in question are located in the bus terminal underneath the railway platforms.
Kenzie Bruce
“RTD purposely took off the stall doors for security reasons,” says RTD spokeswoman Michelle Brier in an email. “It is due to the extreme use of drugs and concern for the persons overdosing or passing away in the stalls.”

RTD, which oversees public light rail and bus operations in metro Denver, has used door-less stalls in the men's restrooms at its Market Street and old Civic Center stations — also over concerns of drug use atop those porcelain thrones. 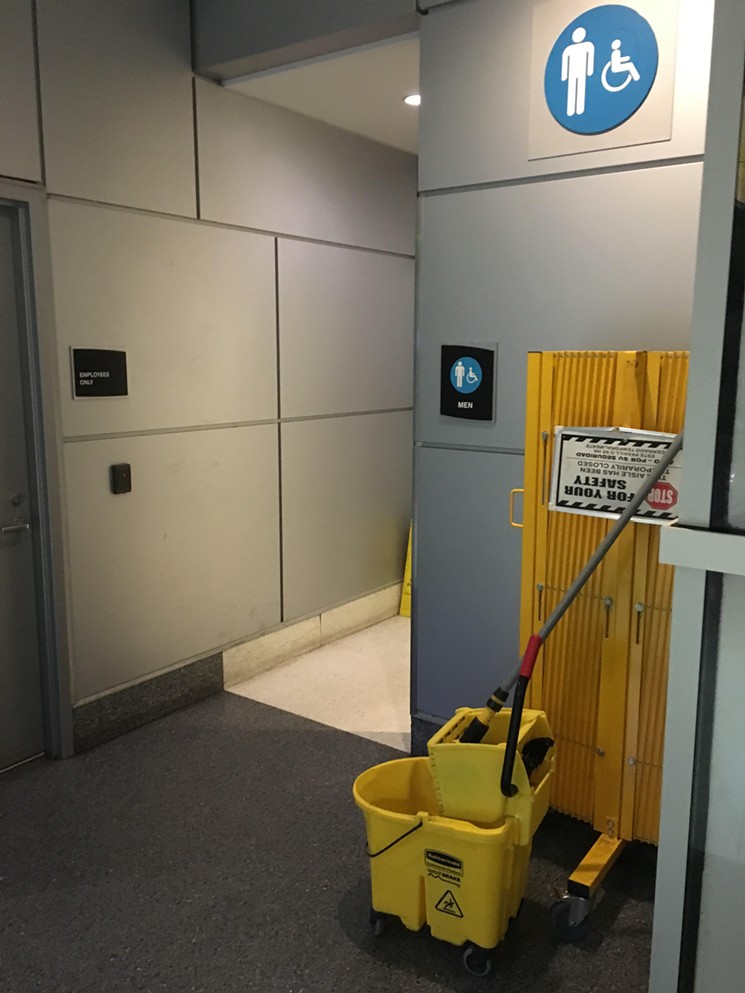 Chris Walker
Although RTD doesn't cite it as a reason for removing the doors, a stall in the men's restroom in the Union Station bus concourse was used by private security guards to beat up a would-be passenger during the early hours of April 20. Two of the security guards — who police say took their victim to the bathroom because there are no security cameras in there — recently pleaded guilty in that case. Brier says that the lack of stall doors is not permanent.

“RTD is modifying the doors to make them more private, but still visible to security,” she writes. “They will be half doors... . The doors at Union Station were in very bad condition due to vandalism and patron abuse. RTD has ordered new doors and will modify them when they come in.”

Brier says the doors will be installed in early January. She adds that RTD's senior manager of facilities did not receive any complaints about the lack of stall doors at the old Market Street or Civic Center stations. But modified doors are now in place in the new Civic Center station bathrooms.

By the way, the stalls in the public bathrooms inside Union Station itself still have their doors.

Are you comfortable doing your business in full view? Let us know in a comment or send your thoughts to [email protected]

Update:This article was updated at 12:30 p.m. Tuesday, December 18, to include RTD's estimate for when new stall doors at the Union Station bus concourse will be installed, and to note that the Civic Center Station restrooms already have "security" half-doors installed.
KEEP WESTWORD FREE... Since we started Westword, it has been defined as the free, independent voice of Denver, and we'd like to keep it that way. With local media under siege, it's more important than ever for us to rally support behind funding our local journalism. You can help by participating in our "I Support" program, allowing us to keep offering readers access to our incisive coverage of local news, food and culture with no paywalls.
Make a one-time donation today for as little as $1.