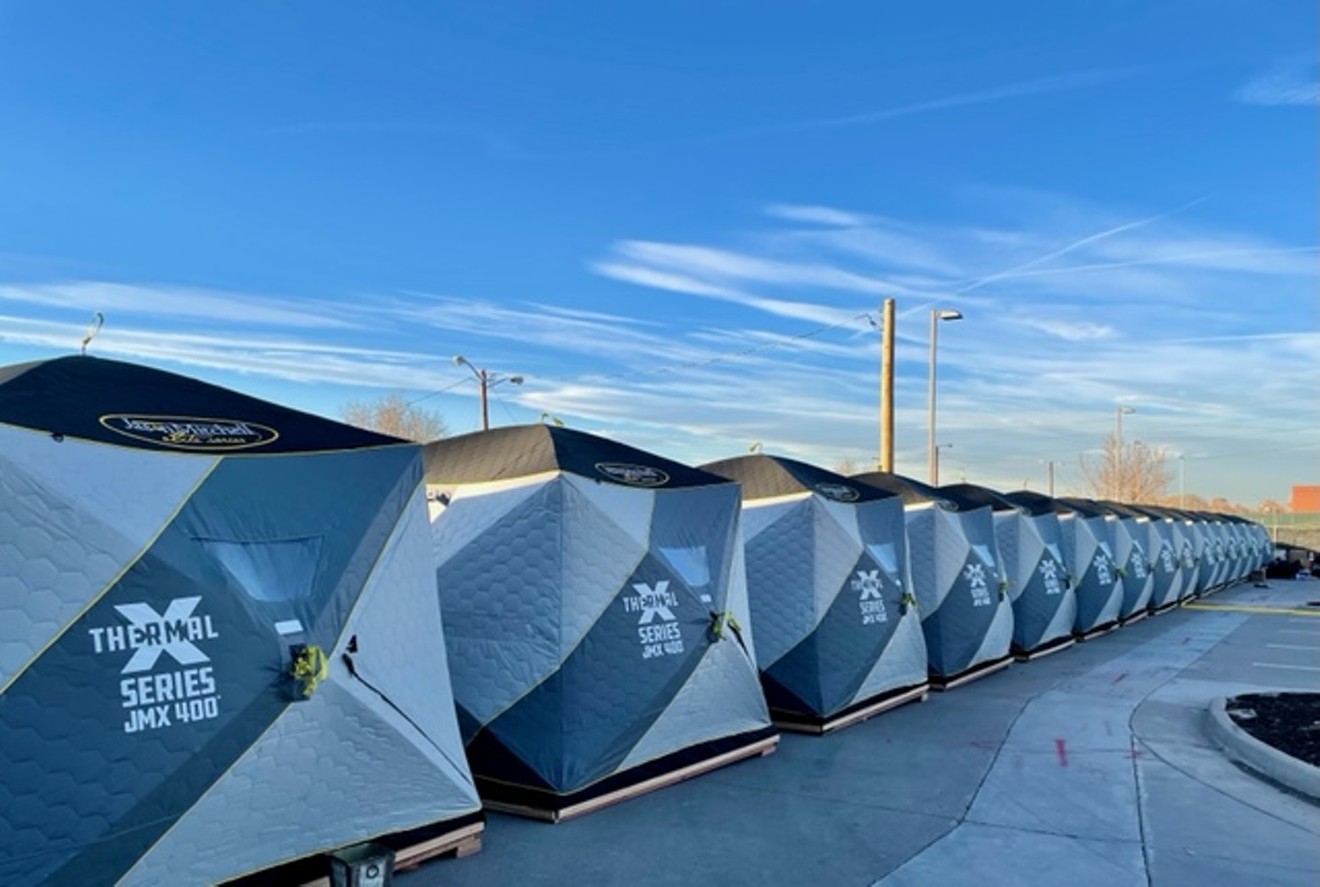 "It’s unique in that St. Francis Center owns it," says Cole Chandler, executive director of the Colorado Village Collaborative, which oversees Denver's three existing safe-camping sites. "In the past, we’ve always been relying on the generosity of another landowner to make it happen."

St. Francis Center isn't just any landowner: The nonprofit focuses on providing services to people experiencing homelessness and has partnered with the CVC at the Regis University site since mid-2021. It purchased the property on Federal Boulevard for $1 million in January, with the goal of creating permanent affordable housing there.

"That’ll be the long-term future, and we’ll be able to activate it temporarily," says Chandler. The safe-camping site on Federal, which will open on June 2, will hold up to 53 units and house up to sixty people, like the Regis site. The CVC also runs sites at 780 Elati Street on Denver Health-owned land and at 3815 Steele Street, next to the Denver Human Services building, on property owned by the city. Those two sites each have a capacity of fifty.

Since the plot on Federal is dirt, the CVC and St. Francis Center plan to use asphalt as a base layer, topped with the kind of ice-fishing tents that have been used at other sites as well as bathrooms and other facilities. It will also have five pallet shelters that will be ADA-accessible.

According to the CVD, the Regis site has served 114 people, including 24 individuals who have transitioned into more stable housing. Of the 48 people currently living there, half are in the pipeline to access permanent housing.

The safe-camping site program was established in Denver in 2020 and set up its first camp that December. After initially opposing the concept, Mayor Michael Hancock has embraced it as a more humane alternative to unsanctioned encampments, and the city budgeted $4 million for the sites this year.

The program has faced some opposition, though. The site in South Park Hill at Park Hill United Methodist Church, in particular, drew the ire of neighbors; other residents opposed the Elati Street site. There have been no complaints about the Regis University site. And so far, the safe-camping site program has weathered all challenges,
KEEP WESTWORD FREE... Since we started Westword, it has been defined as the free, independent voice of Denver, and we'd like to keep it that way. With local media under siege, it's more important than ever for us to rally support behind funding our local journalism. You can help by participating in our "I Support" program, allowing us to keep offering readers access to our incisive coverage of local news, food and culture with no paywalls.
Make a one-time donation today for as little as $1.