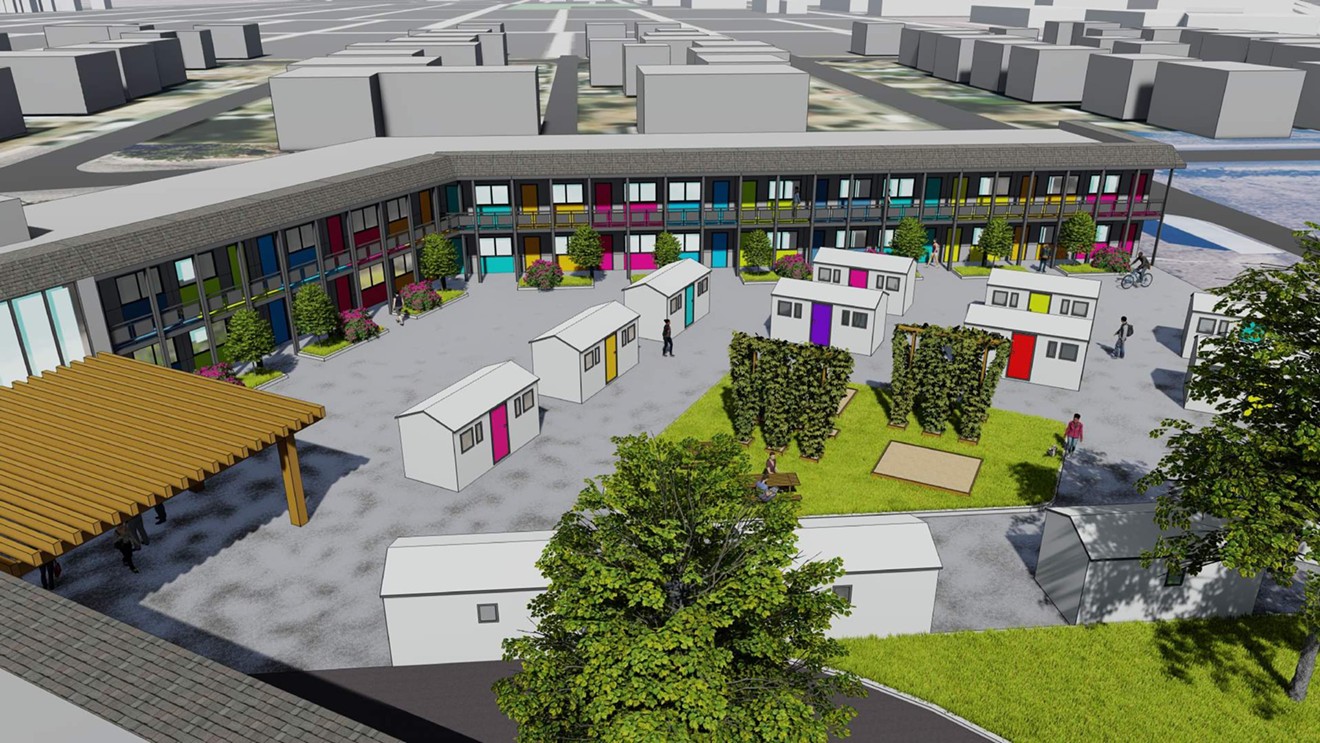 The CVC has proposed a permanent campus. Courtesy of the Colorado Village Collaborative
After five years of moving its tiny home villages and safe-camping sites around Denver, the Colorado Village Collaborative is ready for a strategy shift: The nonprofit organization wants to build a permanent campus to house most of its programs at a single location.

"We recognized that we could not have gotten to be as big as we are and be as big as we had been without this short-term, temporary activation strategy. But now this strategy has become a bottleneck for our potential growth and is preventing us from getting to the scale we want it to be," says Cole Chandler, the executive director and a co-founder of the Colorado Village Collaborative. "This year alone, we’re doing four relocations, and next year we’re scheduled to do three more."

The CVC launched in 2017 with a crowdfunding campaign to build Denver's first tiny home village for people experiencing homelessness; today it's an organization with a $5.2 million budget for 2022.

Plans call for acquiring a site for a permanent campus within the next six to nine months, and breaking ground on the project a year from now. In keeping with the CVC's mission, the campus would feature single-room occupancy units, tiny homes, safe-camping site tents, pallet shelters, services and a wellness center, as well as the group's offices. The CVC might acquire a plot of land and build from the ground up, or it could acquire a hotel and transform the building into single-room occupancy housing while adding other components in the parking lot.

"That second idea feels immediately more attainable. We're working with a real estate agent right now to see hotels we can acquire and looking at vacant land, too," Chandler says. "Part of our goal is to solve the problem of these five locations in Denver that are funded by Denver dollars that need to stop moving around all the time." 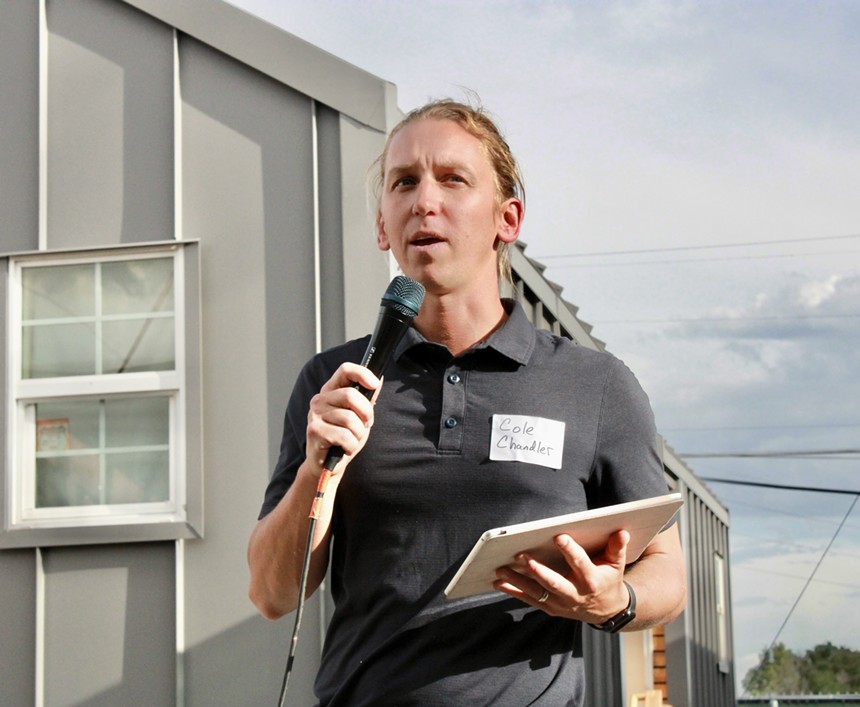 Cole Chandler shared the CVC's new plans on June 9.
Courtesy of Keila Mendoza of the Colorado Village Collaborative
The CVC currently has a tiny home village at East 38th Avenue between Gaylord and York streets and another at 4121 Monroe Street. Since December 2020, the CVC has also operated various safe-camping sites as a more humane and safer alternative to unsanctioned camping on the streets, with uniform ice-fishing tents and centralized access to sanitation and services. Right now, it has sites at 3815 Steele Street next to the Denver Human Services building and on a Denver Health-owned parking lot at 780 Elati Street; it's in the process of shutting down a safe-camping site at Regis University and moving residents there to a new safe-camping site on a plot of land owned by the St. Francis Center at 221 Federal Boulevard.

Both the tiny-home villages and the safe-camping sites have been in a constant state of flux because of short-term lease agreements as well as Denver zoning code regulations that require only temporary operations. Thanks to a group-living zoning amendment passed by Denver City Council last year, the zoning code now allows for permanent tiny home villages. But the temporary unlisted use that allows for safe-camping sites will expire at the end of 2023, so that zoning will have to be tweaked — either before the municipal elections next spring or after a new mayor takes over. While Mayor Michael Hancock was initially opposed to safe-camping sites, the city has since bought into the concept.

So have some of the neighborhoods that have hosted sites, although the CVC has still faced legal and administrative challenges from opponents of certain safe-camping spots.

The CVC is keeping neighbors in mind as it considers potential locations. "We’ve learned from some of our safe outdoor spaces, especially the one at Regis, which some people thought was too far away to serve the population that we’re serving, that we’re willing to go a little further out of the core and we’re willing to go further out of the core and be successful," says Chandler. "We’re not stuck on the idea of it needing to be downtown. We’re really looking everywhere."

The CVC unveiled its plans for a permanent home at a five-year anniversary celebration on June 9 at the tiny home village on Monroe Street. Denver City Council hopefuls and key mayoral staffers, including deputy chief of staff Evan Dreyer, came out for the celebration, underscoring just how much the City of Denver has embraced working with the Colorado Village Collaborative in recent years.

"Our roots were in just being a community-based, community-led organization, so we’re trying to be true to those values as we grow. We really started with a flat structure and as we’ve grown, we’ve evolved into a more traditional hierarchical structure. We’re working to help build careers for people and help pay people fair wages," says Chandler, who notes that the organization is moving to a minimum wage of $19.25 an hour starting in July.

Still, he appreciates that the city is now investing millions in the CVC's programs. "You have to designate resources toward permanent housing and you have to designate resources toward emergency interventions," Chandler says. "There’s a cost to doing nothing. And there’s a cost to doing something with dignity, too. I would say it’s worth that investment every single time."
KEEP WESTWORD FREE... Since we started Westword, it has been defined as the free, independent voice of Denver, and we'd like to keep it that way. With local media under siege, it's more important than ever for us to rally support behind funding our local journalism. You can help by participating in our "I Support" program, allowing us to keep offering readers access to our incisive coverage of local news, food and culture with no paywalls.
Make a one-time donation today for as little as $1.