A flirty selfie of Sheriff Terry Maketa obtained by the Colorado Springs Gazette. Colorado Springs Gazette
Update: Former El Paso County Sheriff Terry Maketa will be retried in relation to four corruption charges on which a previous jury was unable to reach a verdict. Selection of a new jury is scheduled to get under way on October 3, the same day that Undersheriff Paula Presley, a former romantic partner of Maketa's, will be put on trial for accusations that emerged from the sexy scandal.

Among those on Maketa's legal team is Pamela Mackey, the attorney who defended Los Angeles Lakers star Kobe Bryant against sexual-assault charges out of Eagle County circa 2003 and 2004. Mackey's other noteworthy clients over the years include the girlfriend of discredited cyclist Lance Armstrong and Don Vito, co-star of Viva La Bam, a once-popular MTV reality series.

As we noted in our previous coverage, on view below, the odds were always very good that prosecutors would take another shot at Maketa, even though the previous jury found him not guilty on three counts — two involving alleged witness tampering, plus an official misconduct assertion. But jurors deadlocked over two felony extortion charges related to allegations that he threatened to cancel a health-care contractor's $5 million deal with El Paso County jail if he didn't fire one of Maketa's political enemies — beefs that could result in a prison sentence of two to six years — and a pair of misdemeanor misconduct claims.

The man overseeing the Maketa prosecution is 18th Judicial District DA George Brauchler, who also happens to be running for Colorado governor in 2018. His gubernatorial bid added more incentive to make another attempt to punish Maketa, since raising the white flag could be interpreted by political rivals as a willingness to go soft on misbehaving officials.

That Maketa redux has been synced with Presley's trial is one more link between the pair, whose sexual relationship led to a discriminatory and hostile work environment, according to former employees suing them in civil court.

Get more details about all of the accusations against Maketa in our previous coverage.

A cropped photo focusing on Tiffany Huntz, one of the public employees accused in the lawsuit of having a sexual relationship with Sheriff Terry Maketa.
Photobucket via the Colorado Springs Independent
Original post, 5:47 a.m. July 12: Former El Paso County Sheriff Terry Maketa has been found not guilty on three counts related to a 2016 indictment that he'd abused his power while in office. However, the jury was unable to reach a verdict on four other counts, and prosecutors are leaving their options open when it comes to retrying him for these alleged offenses. And that's not to mention a 2015 lawsuit filed by employees against him and onetime Undersheriff Paula Presley, who's scheduled for trial later this year. That document, which appears to still be pending, accuses the pair of practicing sexual favoritism and running a smear campaign against the plaintiffs over an internal affairs file said to have been missing, even though it was actually in Presley's possession the whole time.

The lawsuit, an EEOC complaint against Maketa and the original indictment are accessible below.

As we noted in a June 2014 post, Maketa was targeted with allegations about improper relations with several women on his staff, not to mention promotions based on sexual favors. El Paso's county commissioners responded by unanimously passing a vote of no confidence in Maketa — but he defiantly refused to resign, putting out a video in which he mixed apologies with statements about his intention to serve out his term.

The suit notes that an EEOC complaint charged that Maketa and Presley "had engaged in a sexual relationship with each other that was discriminatory and caused a hostile work environment in the sheriff’s office."

In addition, the lawsuit continues, "allegations made against Maketa in the request for investigation and EEOC charge were that Maketa was engaged in sexual relationships with Tiffany Huntz and Dorene Cardarelle, both El Paso County Sheriff Office employees, and that such conduct was discriminatory and caused a hostile work environment in the sheriff’s office."

Cardarelle has served as comptroller, while Huntz was hired to be the head of training for dispatchers.

Huntz also had a reputation for sharing provocative images of herself online. She's said to have posted under her own name, as well as via a pseudonym, Jessica Jordyn. The photo at the top of this post was originally shared by the Colorado Springs Independent back in 2010, around the time the paper first dug into allegations of impropriety against Maketa.

Official photos of Tiffany Huntz, Paula Presley and Dorene Cardarelle.
El Paso County via the Colorado Springs Gazette
When Maketa entered his final term as sheriff, the lawsuit contends, he tried to arrange a soft landing for himself and those with whom he'd had affairs. Here's an excerpt:


Beginning in 2013, Maketa and Presley, jointly and individually, determined to influence the political race for and election of the successor sheriff of El Paso County. Maketa determined to peddle the influence of his endorsement for county sheriff to a candidate in the upcoming Republican Party nominating commission/caucus. In exchange for a commitment from a candidate (1) to offer Maketa a consulting contract with the Sheriff’s office and (2) to offer a sinecure in the sheriff’s office to his three sexual partners, Maketa would endorse the candidate for Sheriff.

One of the people who ran for sheriff was Bill Elder, a previous member of the department who, the suit says, was not friendly with Maketa and wouldn't go for such a deal.

For that reason, the suit contends, Maketa and Presley "devised a plan to discredit Elder as a candidate for sheriff that involved supposedly adverse and negative information about Elder contained in an Internal Affairs (IA) file concerning Elder's conduct while he had previously been a sheriff's officer."

Peck later discovered that the Elder file was missing, and an investigation was launched to determine its whereabouts. As such, the plaintiffs were subjected to interrogations and even polygraph tests about the file, which the suit says was in the possession of Maketa and Presley and kept at the latter's home.

When Stone suggested that Presley actually had the file, the complaint quotes her as exploding in vitriol about him, saying, “I’m going to kill that fucker! He better not come up on this floor to my office! I don’t want him in my office! That fucker!”

Other allegations: Three hours after King, Lincoln and Gherett submitted a letter to the board of commissioners "requesting an investigation of sheriff Maketa and undersheriff Presley for a hostile work environment, threats, a sexual discriminatory workplace, improper procurement and budget practices that were inconsistent with county policies, and retaliation for political views and civil rights violations," they were placed on administrative leave and escorted out of the building by Presley.

There's an unmistakably personal undertone to the lawsuit, with the actions of Maketa and Presley twice described as "evil." Here's a particularly telling passage:


It was well known to plaintiffs that Maketa and Presley were...subject to fits of unreasoned anger and routinely threatened sheriff’s office personnel with being fired for no good reason and in fact fired personnel for no good reason. It was known to the plaintiffs that Maketa took particular, expressed, delight in seeing employees suffer emotionally as to whether they would keep their employment once saying, “I don’t care that its Christmas. I don’t give a fuck about his family” concerning an individual he was considering firing.

Just over a year after the lawsuit's filing, in May 2016, a grand jury indicted Maketa, Presley and a third person, ex-commander Juan San Agustin.

The indictment details multi-count felony and misdemeanor charges against Maketa and Presley (and two felonies naming San Agustin, who's also slated for trial later this year) involving a range of issues, including conspiracy to commit extortion, witness tampering and even second-degree kidnapping. 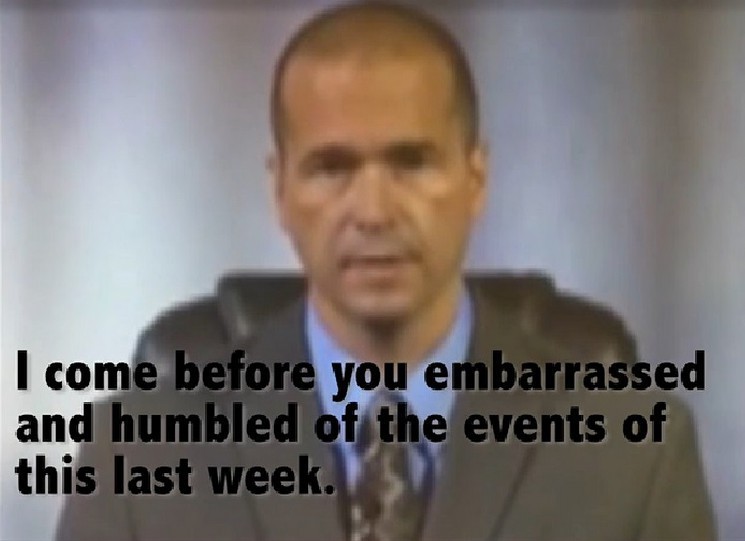 A screen capture from the 2014 video in which Maketa apologized for his actions but refused to resign.
El Paso County Sheriff's Office screen capture
The first two counts against Maketa and Presley involved alleged punitive actions taken against Correctional Healthcare Companies, which contracted to provide services at the El Paso County jail, over a memo outlining "inappropriate comments made to [one staffer] as well as two other CHC employees by an El Paso County Sheriff's Office Commander" who's not named. That and an employee's decision not to run Presley's campaign for sheriff led to a demand that a CHC staffer be removed from her position or else the county would terminate the company's contract. That individual was indeed fired.

Counts three through six, which named Maketa, Presley and (in two instances) San Agustin, revolved around an August 2013 domestic disturbance involving a sheriff's-office employee and his girlfriend, who worked for CHC. She wound up with "a swollen face and bruising on her arm" as a result of punching, pushing and shoving.

The sheriff's-office worker subsequently went to Maketa, with whom he had a "pre-existing relationship," the indictment says, to ask "how he could keep his job as he had been suspended and ultimately terminated following his arrest."

In response, Maketa was accused of contacting the victim and telling her to claim that "she instigated the incident and was the aggressor." She did so in order to help the sheriff's-office employee, who was still her boyfriend at the time.

"At the conclusion of that interview," the indictment states, the woman "was arrested for the crimes of domestic violence, harassment and driving under the influence."

By the time Maketa finally went to trial (the three-week process started last month), the charges against him had been winnowed down to witness tampering, conspiracy to commit witness tampering, three counts of first-degree official misconduct, extortion and conspiracy to commit extortion. But convincing a jury of his culpability proved to be difficult.

In the end, Maketa was found not guilty of the two witness-tampering beefs and one of the official misconduct accusations. However, jurors were unable to reach a conclusion in regard to the extortion allegations and the two other official misconduct matters.

Afterward, lead prosecutor Mark Hurlbert said he and his team would take the next few days to decide on their next course of action. They have ninety days to request a retrial on the four unresolved charges.

It's unlikely Hurlbert and company will simply drop the matter, given the high-profile nature of the case and the amount of effort put into it to date. But even if they choose to walk away, there's a good chance that Maketa's journey through the justice system will continue in some form, with salacious details to follow.