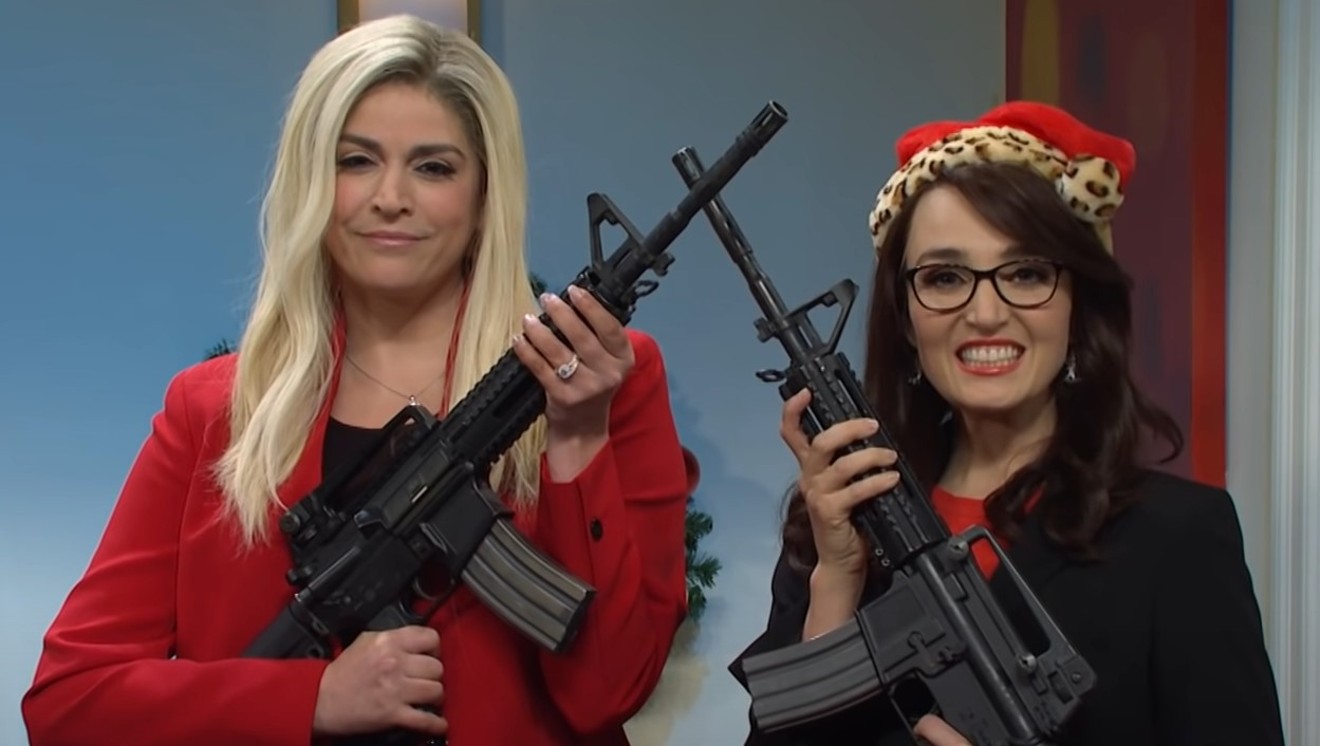 What day of Christmas does your true love bring the hollow points? YouTube
Colorado’s own Lauren Boebert hit the TV big time over the weekend, when she was parodied on the cold open of long-running comedy staple Saturday Night Live. And to use the popular vernacular of her own base: Delicate snowflake Boebert got triggered.

The sketch wasn’t all about Boebert — which might have been one of the things that irked her, since publicity is perhaps the only clear goal of Boebert’s congressional career thus far. It was folded into a wide-ranging piece focused on “A Holiday Message From Dr. Anthony Fauci,” and parodied not only Boebert and gun-totin’ gal pal (and fellow U.S. Representative) Marjorie Taylor Greene, but also Senator Ted Cruz, former New York governor Andrew Cuomo and his formerly-of-CNN brother Chris Cuomo, as well as CDC employees covering a wide range of ridiculous vaccine misconceptions. Boebert’s segment was all of 44 seconds, starting at the 4:12 mark on the video below.
The audience loved it, though they didn't seem to know who in the hell Lauren Boebert was at first —proving, perhaps, that Boebert has a long way to go before she rivals the inherent batshit crazy of Marjorie Taylor Greene. SNL's Cecily Strong played Greene, and got what was probably the short bit's best joke: "First, they said the shutdowns were until they found a vaccine. Then they found a vaccine and said it worked. Then they said everyone should get it. Then people got it and it saved their lives. If that's not communism, then, honey, I might not know what communism is."

But as Boebert, Chloe Fineman got the last line of their segment: "So Merry Christmas, and remember: guns don't kill people — people people people."

While Boebert has been operating under the "All press is good press" maxim since the beginning of her political career, she's always willing to take aim at her critics. And she wasn’t subtle in expressing her displeasure of SNL via Twitter.

Twitter
So much to unpack here. Her shotgun-insult response itself is remarkable, as she insults the show, calling it poorly acted and missing the fact that part of the joke for nearly half the sketch was about "CDC nerds" in terrible middle-school-drunk-driving PSA sort of stage skits.  And ooh, that second paragraph, chock-full of stabs that go effectively nowhere. First she resorts to the "poor trigger discipline" line that so many of her supporters bloviated about when talking about her heavily armed Christmas card. Then a cheap shot at SNL performer Fineman — sort of ironic, considering how recently Boebert herself desperately wanted a shot at being in the entertainment biz with her modeling account at exploretalent.com — followed by yet another shot at Alec Baldwin, one of her favorite human targets.

And then, finally, a two-gun volley at both SNL and CNN. It all comes off as petty and vindictive, not to mention politically unwise, at least for the America that used to demand some level of apparent integrity and serious demeanor from its elected officials. If nothing else, it might prove that Boebert doesn't farm out her Twitter account. This tweet is all Boebert.

And it wasn't the last one, either: Boebert loves to double down on errors in judgment, and so minutes later, she thought of another zinger worthy of what's no doubt Rifle's version of the Algonquin Round Table up there at Shooters Grill every morning.

Twitter
Immature? Sure, but points for consistency. Was this something of a response to the discussion she and her penis-exposing husband, Jayson, were talking about Sunday morning over novelty waffles shaped like shootin' targets? Possibly, because Boebert's second ill-advised response to being parodied on national TV seems to reply to a comment about the far right needing its own comedy show. So she attacks CNN and throws MSNBC in the mix just for good measure, making no real point whatsoever other than to underline her frustration.

Parody, of course, is a reflection of actual actions; SNL can't make fun of something that doesn't exist. There was a reason that Dana Carvey's impersonation of Bush Sr. became one of the highlights of that era; and Tina Fey's spot-on and deliciously vacuous take on Sarah Palin may well have made a serious difference in the 2008 presidential election. Satire isn't random; it's based on the perceptions of the audience of a recognized truth. Most major political figures in the last half-century have been on the receiving end of SNL satire, sometimes very much on purpose, and sometimes to great political effect. There's a serious argument to be made that Trump himself couldn't have risen to the heights he did without both SNL (he hosted back in 2015) and his NBC show The Apprentice, both of which offered him a national platform.

So, yes, being parodied on Saturday Night Live is a double-edged sword: More people are paying attention to you, and more of them are thinking that you're an idiot. It's got to be tough for Boebert to accept that when she's not doing racist and terrible standup in front of her adoring, race-baiting, ammo-worshipping base that's trained to drink in the cruelty like Kool-Aid, she's a joke that only lasts forty-some seconds.

The trick is this, Representative Boebert: If you don't want to be portrayed as just a gun-fetishist empty smile in a leopard-print Santa hat, then be more than that.
KEEP WESTWORD FREE... Since we started Westword, it has been defined as the free, independent voice of Denver, and we'd like to keep it that way. With local media under siege, it's more important than ever for us to rally support behind funding our local journalism. You can help by participating in our "I Support" program, allowing us to keep offering readers access to our incisive coverage of local news, food and culture with no paywalls.
Make a one-time donation today for as little as $1.