Mile High Stadium Naming Clusterf*ck and Revenge of the Nerds 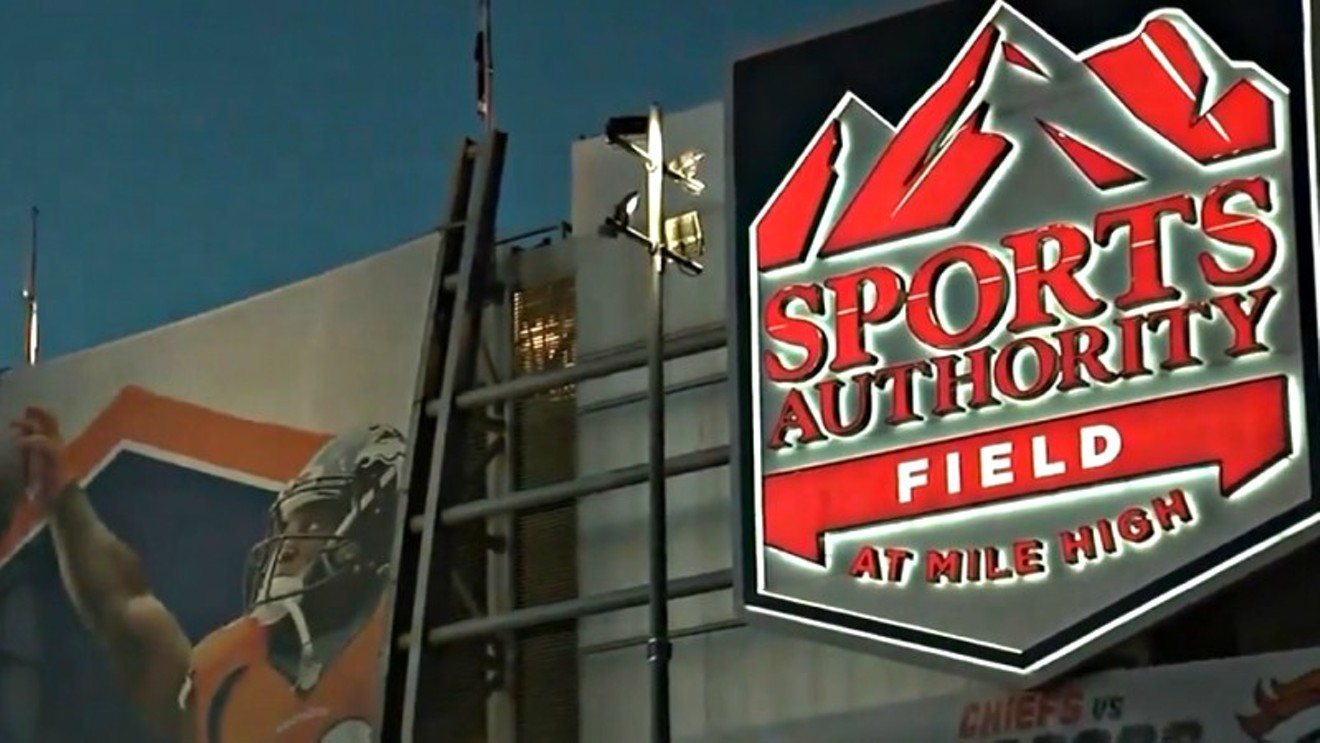 One of the many Sports Authority Field at Mile High signs that Broncos fans have seen at the stadium for years. Denver 7 via YouTube
This week, crews are removing Sports Authority signage from what has been known in recent years as Sports Authority Field at Mile High, presumably because the Denver Broncos are sick of playing in a stadium emblazoned with the name of a company that declared bankruptcy in March 2016 and liquidated all its assets a few months later. Since acquiring stadium naming rights in August of that year, Broncos executives have tried and failed to line up a new sponsor, and a branding expert says the type of tech companies most able to afford the $10 million per year the team wants are hesitant to get involved in a business relationship that could well conjure painful personal memories.

"It's the revenge of the nerds," says Darrin Duber-Smith, marketing professor and senior lecturer at Metropolitan State University of Denver. "Tech people don't like sports unless it's soccer, and I think they have a fear of the sports realm in general. It's alien to them. These were the kids picked last in pick-up games — but now that nerds have become chic, it's time for them to use sports as a marketing platform."

Given the Broncos' history of success (including a Super Bowl victory in February 2016), many observers expected naming rights to be snapped up quickly. But they weren't, and in June 2017, ten months after the Broncos began shopping for suitors, Duber-Smith offered a number of explanations, including the experience of Sports Authority, which he believes was killed by the stadium deal. "I remember doing interviews when Sports Authority put its name on the stadium," in 2011, he told us at the time. "My big warning was, 'I'm not sure Sports Authority is a big enough or healthy enough company to commit that much money from their marketing budget each year.' And I was right."

In a September 2017 followup, Duber-Smith said the Sports Authority name might stay on the stadium for years because of falling prices for venue naming prompted in part by an overabundance of inventory. "The only thing worse would be to leave it blank," he maintained in an interview for that post. "They really don't want to do that, because fans don't understand that in 2017, you need to have a venue naming-rights partner. It's not going to be Mile High Stadium; they don't want people to get used to having no [sponsor] name on the stadium. And people shouldn't want that, either, because the ticket prices would go up. Broncos ticket prices aren't that high compared to a lot of the league, and the venue naming-rights partner softens the blow for consumers." 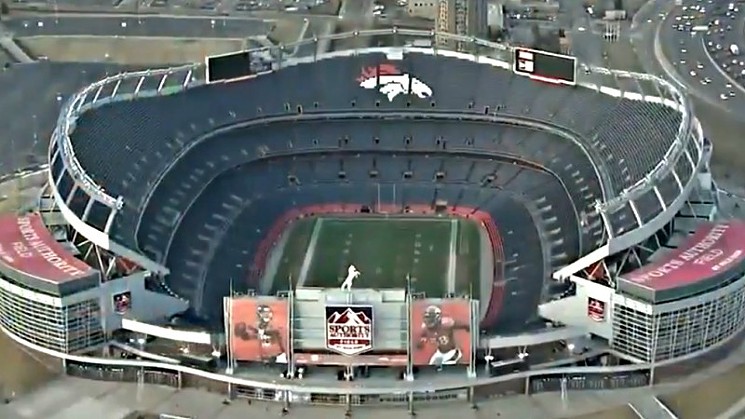 A bird's-eye view of Sports Authority Field at Mile High branding.
Denver 7 via YouTube
Does that mean Duber-Smith feels the Broncos are making a mistake by removing the Sports Authority signs before inking a new pact? No — because, in his view, "conditions have changed. The Broncos had one of the worst seasons in the history of the franchise. Fans want to see progress in fixing what happened — and getting rid of an association with a dead company is one way to do that."

He adds: "This is the lesser of two evils. Before, the lesser of two evils was keeping the name on the stadium because they wanted to get a new partner. They figured they'd get one within a year and it would be no big deal. But now the name has started to stink. Perception-wise, they had to take the name off the stadium, because it could take years for them to get a naming-rights sponsor."

The Broncos are clearly being cautious when it comes to a new stadium-branding partner, and no wonder, since its last two have been fiascoes to varying degrees. In 2001, Invesco, a financial-services firm, signed a contract that was set to run through July 31, 2021. But by 2007, the company was in flux, moving its headquarters to Bermuda and, later, Atlanta. The company still exists today, and according to a November 2017 press release, its assets under management topped $937 billion. However, the changes in Invesco's operation meant keeping its name on the Broncos stadium no longer made fiscal sense, which is why the naming rights were sold off to Sports Authority in 2011.

Sports Authority's collapse five years later makes the Broncos "two-time losers" in the naming-rights game, Duber-Smith believes — and getting things wrong three times in a row would be both costly and embarrassing. So he doesn't expect the team to jump at any short-term solutions, such as a one- or two-year deal of the sort that caused the Miami Dolphins's base to briefly be dubbed Land Shark Stadium thanks to an agreement with singer Jimmy Buffett.

Moreover, as Duber-Smith points out, "there aren't nearly enough big brands that can afford to commit the amount of money it takes to make this work over fifteen, twenty or thirty years. A lot of them already have large-scale naming-rights agreements — some more than one."

However, Duber-Smith goes on, "a sector that's ripe for the picking is technology. How many tech companies are sitting on hundreds of millions of dollars? Look at Google, Facebook, Apple. But almost no tech companies are involved in sports marketing at this level."

Another angle on a Sports Authority Field at Mile High sign.
Denver 7 via YouTube
Indeed, the most prominent tech firm to put its name on a sports venue is Oracle, whose branding is on the arena the NBA champion Golden State Warriors call home. But that pact already has an expiration date. The Warriors are building a new stadium in San Francisco, to be called the Chase Center after JPMorgan Chase, which reportedly paid around $300 million for a twenty-year agreement in 2016.

This windfall appears to be the exception rather than the rule these days — and two additional factors complicate matters from the Broncos' perspective.

"The first problem is that they have an old stadium, and it's easier to get a naming-rights sponsor for a new stadium than an existing, broke-down palace," Duber-Smith points out. "They only got about $4 million a year for the USC coliseum, and the University of New Mexico only got $1 million a year [from a company called Dreamstyle Remodeling] for two venues — their arena and their football stadium. That's like giving it away for free."

Secondly, Duber-Smith goes on, "there's the lease on the Broncos' stadium. It only has thirteen years left, and there may not be a brand that will want to sign for thirteen years. Most don't want to sign for less than fifteen, because it takes forever to make these deals optimal. That's why most of them are being written for twenty years."

Right now, the Broncos are optimistic, publicly anyhow, that they'll line up a new sponsor by the beginning of the 2018-2019 season — and if they don't, they'll use what's described as a placeholder name. For the latter, Duber-Smith suggests a tribute to ailing owner Pat Bowlen as a moniker rather than referring to it as Mile High Stadium — because, again, fans who'd like the name to remain permanently would be upset if it's changed again.

In the meantime, the stadium's official name remains Sports Authority Field at Mile High for events already scheduled to take place there over the coming months, even though the signs will have been removed before any of them take place.

The result is further confusion — just as it is for the squad that plays at the stadium.