The Downtown Denver YMCA has again found itself in a renaming controversy. Conor McCormick-Cavanagh
Two weeks ago, delegates to the Master Community Association of Stapleton voted to change the name of the neighborhood, named for the onetime Denver airport whose space it now occupies, which was named after Benjamin F. Stapleton Sr., a leading member of the Ku Klux Klan when he was elected mayor in 1923. Meanwhile, the YMCA of Metro Denver is going through with renaming the Downtown Denver Y after Stapleton Sr.'s son, Benjamin F. Stapleton Jr.

"The YMCA of Metro Denver recognizes the importance behind the decision to rename any of our wellness centers especially as it relates to our commitment to ensure all individuals may thrive and feel welcome. Given the current environment, our leadership team is working hard to ensure any decisions are reflective of our core values. At this point we do not have any additional updates, but will continue to communicate information as it is available with our members and the communities we serve," says Sue Glass, president and CEO of the Downtown Denver YMCA.

For years, the YMCA of Metro Denver has planned on putting the name of Benjamin F. Stapleton Jr. on its downtown facility; not only was he a big supporter of the Y, but after his death a family foundation run by his descendants donated over $1 million to support renovations to the facility.

Stapleton Jr., who was born in 1919 and died in 1993, served as both board chair and president of the downtown Denver Y and "led a shift in the organization's philosophy to not only serve the suburbs of Denver, but also bring Y programs to the inner cities, specifically reaching at-risk individuals in communities where resources were scarce and funding was minimal," according to a bio provided by the Stapleton family's Harmes C. Fishback Foundation Trust, which made the donation.

In announcing that donation in 2016, Jim Hiner, then president and CEO of the downtown Y, was effusive in his appreciation.

“This generous donation will indeed help transform the 110-year-old historical building which houses the Downtown Denver YMCA. More importantly, it will enhance and improve this long-standing gathering place, and make it possible for the YMCA to provide more programs and activities to serve the diverse and growing community of Downtown Denver. We are grateful for the Trust’s commitment to our branch and to our community," Hiner announced. 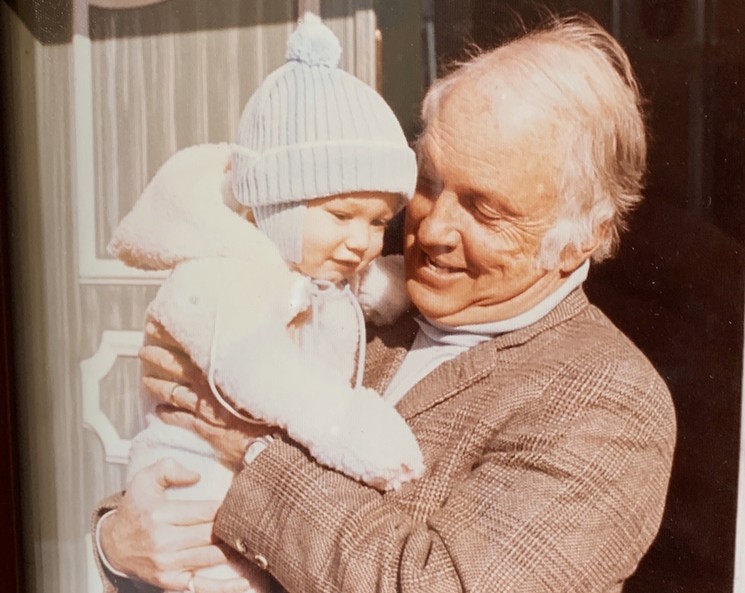 Benjamin F. Stapleton Jr. (right) with grandson Walker Stapleton (left).
Courtesy of Jenna Stapleton
But when news broke that, as part of its appreciation of "this generous donation," the downtown Y would be named after Ben Stapleton Jr., the discussion already focusing on Stapleton Sr.'s role with the KKK spilled down a generation. At one point, then-state historian Patty Limerick hosted a meeting on the issue at the Blair-Caldwell Research Library in Five Points.

The controversy died down for a while as the name-change proposal moved forward, but it didn't go away. Some Y members, such as Joanna Ford, decided to not renew their memberships because of the renaming choice.

"It triggers people and it’s traumatic," says Ford. "The legacy of that name is an issue, so putting that name on a building in the center of Denver just feels so wrong."

Rename St*pleton for All, the main group that has been pushing for a neighborhood name change, agrees. “The YMCA and its board must weigh their 2018 decision to honor the wishes of big-money donors against the current context in 2020. Even when it refers to a different member of the family, the name ‘Benjamin Stapleton’ carries a symbolic weight in Denver. They should not be surprised if community members are hurt or push back given the history the name carries, and the powers that be would do well to listen to those voices," says Liz Stalnaker on behalf of the group's board.

But others, including Colorado state historian William Wei, believe that sons shouldn't be judged on the sins of their fathers. While Wei says that the name change effort in the Stapleton neighborhood is a "way of empowering those who oppose what [the elder] Stapleton stood for and what the KKK stood for," he doesn't see Stapleton Jr. guilty by association.

"I think he certainly should be recognized for his contributions to the YMCA," says Wei, "and hopefully they will put a plaque in the building explaining why they named the building after him. That serves as an example for others that they should do similar good works."

And in fact, the Y had planned to honor Ben Stapleton Jr. with exactly that: a plaque explaining his contributions.

But so far, the plaque has not appeared.

Asked when it will be installed, Cori Streetman, a spokesperson for the downtown Y, simply referred a reporter to Glass's statement, which says nothing about the plaque. When pressed, Streetman clarified that "the YMCA is not declining to answer the...question; rather, the leadership is working with the donor to determine next steps."

Both Walker Stapleton, the grandson of Ben Stapleton Jr. who was the Republican candidate for governor in 2018, and his wife, Jenna, who runs the family foundation, have expressed support in recent weeks for renaming the Stapleton neighborhood. But they are ready to ask for their money back if the YMCA backs out on the plaque installation, according to a reliable source.

"That's something that I will be very vocal about that should stand," Jenna Stapleton previously told Westword. "It's named after a completely different person."
KEEP WESTWORD FREE... Since we started Westword, it has been defined as the free, independent voice of Denver, and we'd like to keep it that way. With local media under siege, it's more important than ever for us to rally support behind funding our local journalism. You can help by participating in our "I Support" program, allowing us to keep offering readers access to our incisive coverage of local news, food and culture with no paywalls.
Make a one-time donation today for as little as $1.