The official Denver Public Schools portraits of Board of Education president Xóchitl "Sochi" Gaytán and vice president Tay Anderson. Denver Public Schools
Denver Public Schools, which will launch the 2022-2023 academic year on Monday, August 22, faces many challenges, including approximately 150 open teaching positions and hundreds of other job vacancies. But the one getting the most scrutiny right now is turmoil within DPS's Board of Education  that came to a head in June, when the panel's president, Xóchitl "Sochi" Gaytán, went public with claims of bullying and intimidation leveled at two other members, vice president Tay Anderson and treasurer Scott Esserman.

In response to a series of questions from Westword, Esserman provided a brief statement: "I am excited about the beginning of the school year, the superintendent's new strategic plan and engaging in the work together with my board colleagues in ensuring that all of our students are thriving and learning, that we're supporting all of our employees and focusing on the work of Denver Public Schools." But both Gaytán and Anderson spoke in detail about the situation.

In general, Gaytán says she's tried to remain above the fray, emphasizing accomplishments made by the board that she thinks have been overlooked amid the noise. But she also makes clear her belief that "the abusive behavior toward me by two male colleagues" isn't a thing of the past.

For his part, Anderson claims that he received death threats after Gaytán shared her accusations with Westword and Denver7, prompting him to wear a bulletproof Kevlar vest at some appearances. But he also admits allowing his attention to stray from helping kids to what he refers to as "adult politics."

"I am holding myself accountable just as much as I want my colleagues to hold themselves accountable," Anderson adds. "I believe this is our opportunity to turn the page, because our students deserve a school board that doesn't look like Douglas County's."

According to Gaytán, who was elected in 2021 and chosen to serve as president shortly thereafter, the conflicts with Anderson and Esserman have mostly centered on the policy-governance model used by the board. In her words, they find it "too restrictive," and she stresses that her reading of the model's guidelines are based on consultations with the board's legal representatives. "It isn't just what Sochi thinks," she says.

She believes that Anderson and Esserman have crossed the line with their objections about the model. "There's the dynamic of being a Latina woman as president on the board that's playing out when it comes to a couple of men on the board struggling with the interpretation of the infrastructure," Gaytán maintains. "And when I receive the power struggle from these men, it feels abusive to the point that it appears as the men silencing the voice of a Latina."

In an effort to defuse the tension, the board employed mediators at two sessions last week: an eight-hour retreat on August 8 and a two-hour meeting on August 11. But there were few kumbaya moments, with CBS4 Denver backing up its assertion that the team-building exercise devolved into "an insult-trading, name-calling blowup" with an impassioned exchange between Anderson and Gaytán that was recorded. In response to Anderson saying, "I want to know that you know what you did was wrong and that you apologize for it and that you're not going to do it again," Gaytán replied, "I'm not apologizing for exposing your misogyny and your sexism." 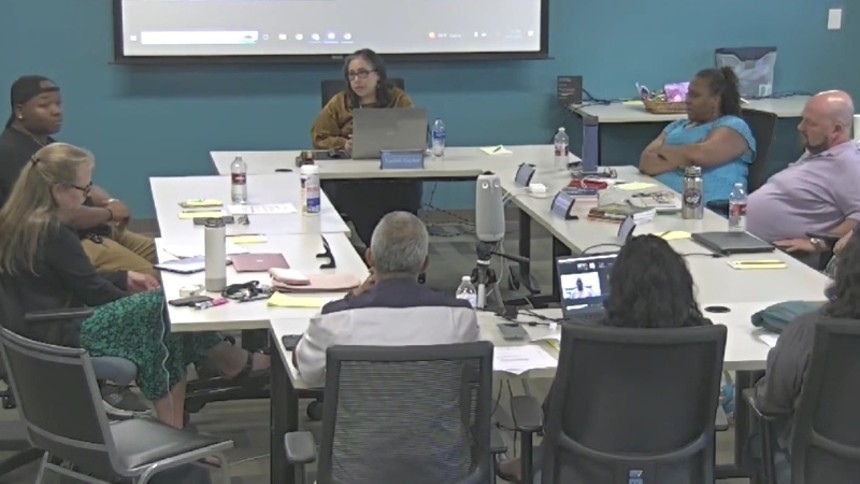 Tensions were high at DPS board sit-downs last week.
Denver Public Schools via CBS4 Denver
Nonetheless, Anderson describes the mediators as "probably some of the best we've ever worked with in my time serving as a Denver school board member. They were honest, but they held us to standards, especially in our first session, which really highlighted the fact that it was miscommunication that led to the original Westword and Denver7 stories." He sees Gaytán's allegations about a plot to dump her as president as a prime example: "There was even a joke between another school board member and myself about that — like, 'Did you know about a coup?' I didn't know anything about a coup. There was no plan to replace the president, and here we are: She's still president of this board." Esserman echoed Anderson's denial.

During the retreat, "we all agreed as a board, every member, that we would stop using labels. But at our last board meeting, labels were being thrown around and the mediators called that out," Anderson adds, referring to the sexism-and-misogyny line. By holding everyone accountable, he says, "they really opened my eyes to show me that I haven't been focusing all my energy on the district, and that I had focused instead on interpersonal issues with my colleagues."

Gaytán emphasizes that work is getting done. She's particularly proud of the support given to what superintendent Alex Marrero refers to as the district's new "strategic roadmap" — the blueprint of a plan intended to help DPS navigate a future that's likely to include student decline and possible school closures or consolidation. And while she concedes that some members aren't working together as efficiently as everyone would prefer, she sees the rough patches as fairly typical for boards, whether they're associated with schools, businesses or other organizations.

"We're going through a transformational cycle that looks like a storming phase," she says. "We will eventually move into a more norming-and-performing phase, where you will see more of the board-policy work that families, students and community members are looking to see."

To reach this stage more quickly, Gaytán has expressed her willingness to take part in one-on-one sessions with Anderson and Esserman, to be guided by a mediator; she previously said that she didn't feel safe meeting with either of them alone. Meanwhile, Anderson extended an olive branch of sorts on social media, reposting a Gaytán item about her imploring the Colorado State Board of Education to "reject the racist and homophobic revisions made to the Colorado State Social Studies standards" along with the phrase "Right on."

But Anderson also describes a specific individual who allegedly threatened him as "an avid supporter of our current president," even while acknowledging that he doesn't hold Gaytán responsible for that person's actions. (Gaytán says she is not in communication with the person Anderson named and received no campaign donations from the individual, to her knowledge.) And when asked if he's optimistic that the board has turned a corner, he replies: "I don't believe we have approached that corner just yet."

For now, Anderson continues, "I want to return to the work of the students, and that's where my priorities are. I may never get closure in this situation. But I am dedicated to moving the needle forward for students, even if nobody else wants to do it — although I am confident there are other colleagues who want to move that needle forward, too."

Similarly, Gaytán notes that she's "moving forward with preparing and coordinating board-meeting agendas, and I'm looking forward to to the future — supporting our superintendent with the strategic roadmap and day-to-day operations. And at the last board retreat, I committed myself to helping mend any interpersonal conflicts so that we can move in the direction of becoming a working board and reassuring the public that this is the direction the board is heading in."
KEEP WESTWORD FREE... Since we started Westword, it has been defined as the free, independent voice of Denver, and we'd like to keep it that way. With local media under siege, it's more important than ever for us to rally support behind funding our local journalism. You can help by participating in our "I Support" program, allowing us to keep offering readers access to our incisive coverage of local news, food and culture with no paywalls.
Make a one-time donation today for as little as $1.