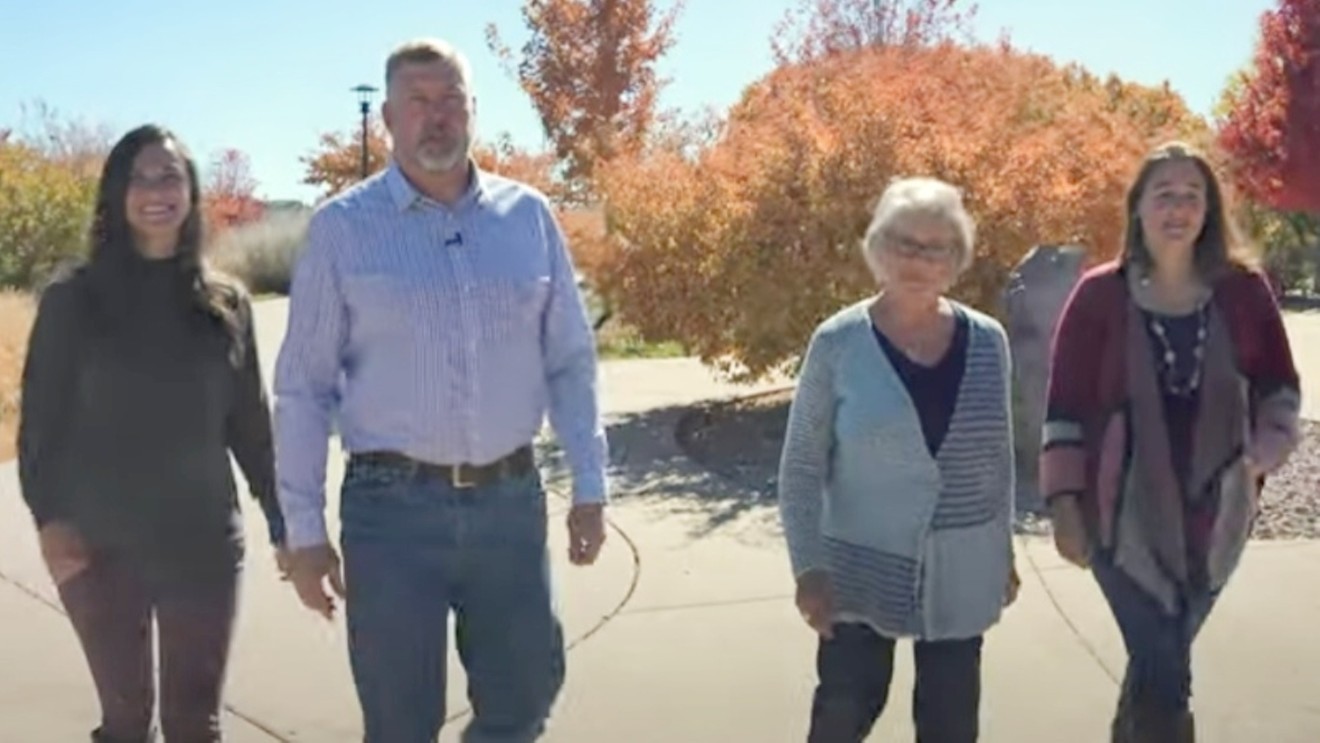 Two more examples emerged on June 14. The first is a new lawsuit that asks DCSD to "'show cause' under the Colorado Open Records Act (CORA) for why they refuse to allow inspection of training binders used by four newly elected directors at a secretive 'retreat' in Estes Park after being elected, but before being sworn into office," according to the plaintiff, Douglas County resident Robert Marshall. The document implies that the binders essentially provided a game plan for Mike Peterson, Becky Myers, Kaylee Winegar and Christine Williams, a conservative bloc voted into office last November, on how to skirt Colorado Open Meetings Law while engineering the February 4 firing of superintendent Corey Wise, as well as the March hiring of retreat attendee Erin Kane, his handpicked replacement.

Also on June 14, Douglas County announced that a lawsuit filed by the school district prior to last November's election over a decision by the Douglas County Board of Health to essentially gut the COVID-19 masking rules for schools has been settled. The agreement calls for both the district and the health department to bear their own legal fees and the county to pay an additional $90,000 to DCSD for "the hiring of a Psychological Safety Coordinator," a news release reveals. Douglas County characterizes the deal as "amicable," which is no surprise, since it was a holdover from the previous board. After they were elected, Peterson, Myers, Winegar and Williams supported allowing parents to opt out of face-covering requirements, as the Board of Health had ordered.

But Marshall's current campaign will not be as easy to dismiss. An earlier Marshall lawsuit against the Dougco school district and its board is still pending, and his latest complaint builds on its predecessor, which contends that Peterson, Myers, Winegar and Williams took part in two-at-a-time conversations that Marshall refers to as daisy-chaining to plot Wise's ouster outside the public's view, in violation of Colorado law. In March,18th Judicial District Judge Jeffery K. Holmes granted a preliminary injunction against the practice; the district and the school board have appealed.

The three-day Estes Park retreat got underway on November 5, just three days after the new board members were elected. Marshall notes that "the newly elected directors' choice for superintendent, Erin Kane, attended this private retreat. This was in addition to training/advice provided by attorney Will Trachman, who was immediately hired as the board's attorney upon the new directors being sworn in, and who immediately resigned the next day as the board's attorney when his previously undisclosed role in the retreat was disclosed."

As for the binders, the district claims that they're "not public documents, as the newly elected directors were not yet 'public officials' subject to the CORA when they used the binders for the sole purpose of education and training on their public duties," Marshall continues. "The directors, however, continued to retain...these binders in their possession for the self-evident purpose to guide them in their public duties."

As a result, "the binders are now public documents subject to inspection and disclosure," Marshall argues. "This refusal to provide records related to public functions, the core purpose of the CORA, is part of an ongoing pattern by the new Board of Education to engage in secretive decision-making and meetings to avoid the public scrutiny expected by Colorado's Sunshine Laws."

This post has been updated to note that the Douglas County School District offered no comment about the new lawsuit.
KEEP WESTWORD FREE... Since we started Westword, it has been defined as the free, independent voice of Denver, and we'd like to keep it that way. With local media under siege, it's more important than ever for us to rally support behind funding our local journalism. You can help by participating in our "I Support" program, allowing us to keep offering readers access to our incisive coverage of local news, food and culture with no paywalls.
Make a one-time donation today for as little as $1.