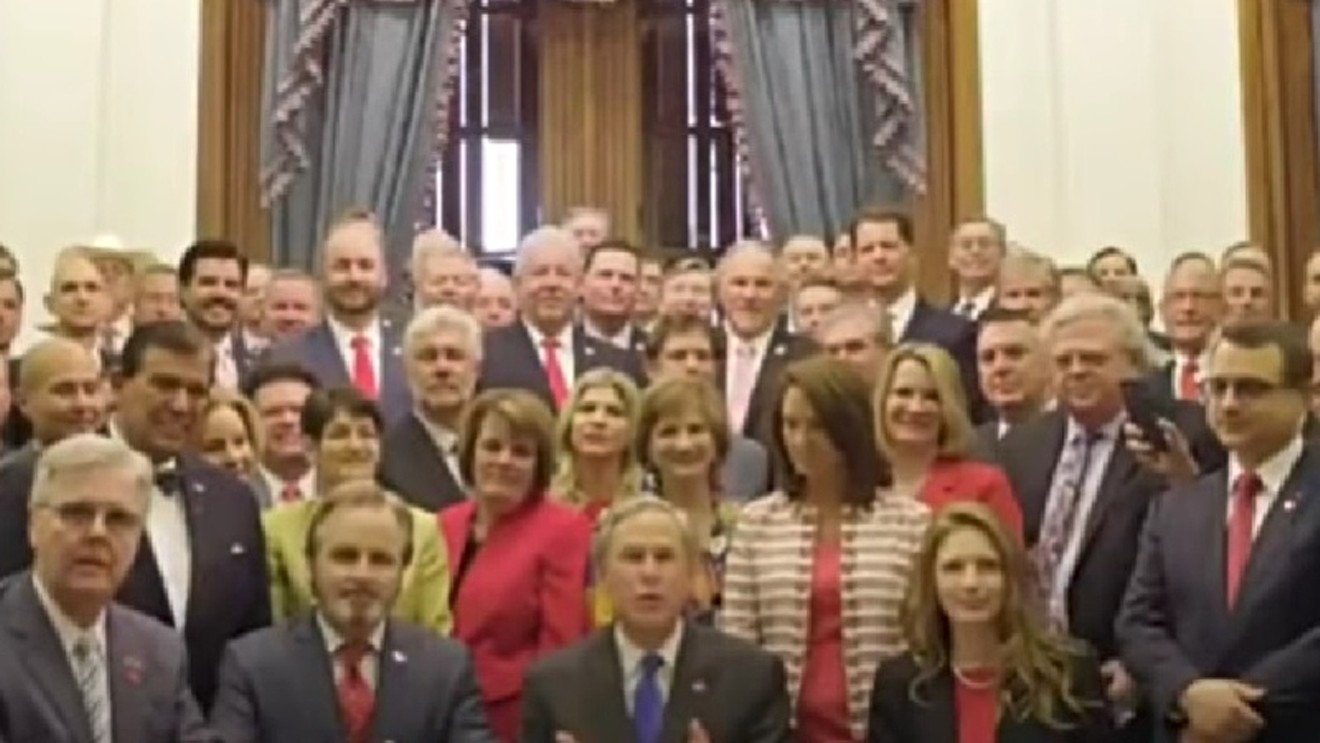 Texas Governor Gregg Abbott (center front, with blue tie) and legislators at the 2021 signing of the so-called Heartbeat Act, the nation's most restrictive abortion measure. WFAA via YouTube
Just over a month ago, on June 24, the U.S. Supreme Court dumped Roe v. Wade, the landmark 1973 decision that guaranteed abortion rights in America, leaving the choice of whether to allow or ban the procedure to individual states. And the impact on Colorado, where abortions remain legal, was immediate and overwhelming.

The day after the decision in what's formally known as Dobbs v. Jackson Women's Health Organization came down, the caseload of advocacy organization Cobalt Colorado tripled, according to Amanda Carlson, director of the Cobalt Abortion Fund. And she says the demand for services hasn't flagged since then, owing to an influx of patients from states where abortion access is nonexistent or severely limited, with the overwhelming majority hailing from Texas.

Newly released fund data reveals that Cobalt Colorado paid for 710 procedures between January 1 and July 25, with 88 in June alone. And of the 168 clients the organization helped between June 24 and July 21 with practical support such as travel expenses, child care and hotel rooms, 64 percent were from Texas, 31 percent came from other states, and 5 percent were from Colorado.

Carlson notes that this trend was well defined long before the U.S. Supreme Court's edict. The increase started with the 2021 passage of Senate Bill 8, also known as the Texas Heartbeat Act, which prohibits abortion after fetal cardiac activity is detectable — usually around six weeks, before most women know they're pregnant.

"We really saw the effects of SB8," Carlson says. "We still predominantly serve a high percentage of folks from Texas — and that's been exacerbated by the fall of Roe. We've spent about $57,000 on travel support just since the Dobbs decision, and most of the clients we've helped have been from Texas."

Other clients are from Oklahoma, Wyoming, North and South Dakota, Utah and Nevada. And that's not all. "Almost instantaneously after the ruling, clinic staff in states with trigger laws had to call and cancel patients that same day," notes Carlson, referring to bans designed to go into effect should Roe be overturned. "The effects were devastating, and Cobalt Colorado has stepped up to fill that need. Historically, our fund has done procedure assistance, covering abortion care itself, but in our current-day landscape, we have to meet travel needs as well. That's why we chose to cover anybody's travel expenses who was unable to afford them. We take folks at their word when they say they need that kind of help."

Another reason so many women from Texas have been coming to Colorado, Carlson continues, is because the former "encourages neighbors to snitch on neighbors. That meant a lot of our partner funds in that state had to suspend or indefinitely pause their services to protect their staff. And because Colorado has no gestational limits and has several providers who can help with later-in-pregnancy care, we've been no stranger to helping people from across the country."

Carlson acknowledges that Colorado's popularity as a destination for abortion care brings with it the prospect of the system's capacity being overwhelmed. "That's definitely what keeps me up at night," she says. "We're only one fund, one state, and there are only so many hours in the day for providers to see patients and only so many resources we can provide. And we're also feeling the impact of inflation. We spent $1,200 flying a client and her parent from Oklahoma over Memorial Day weekend, just before Dobbs, and we saw similar expenses over the Fourth of July weekend — and the nature of this work means last-minute hotel and flight bookings that are more expensive."

Donations to the Cobalt Abortion Fund are up, for which Carlson is grateful. "We need to make sure we can sustain this work," she says, not just financially, but emotionally.

"I'm so happy to live in Colorado and to lead this effort to meet the need — to be the difference in whether or not people can access life-saving health care," Carlson adds. "But at the same time, the secondary trauma is real, and it's been a challenge for us and our staff to really try to support people and show up for our clients while also managing the fear and the trauma that folks might be experiencing as they have to navigate traveling to get health care. Some of the folks we work with might be fleeing a violent partner, or they may be worried about a neighbor reporting them to law enforcement. And easing that fear while understanding this may be a legal gray area makes it that much more difficult."

Indeed, assorted states, including Missouri, have looked at passing laws that could punish residents who get an abortion elsewhere. "Based on my understanding and the affirmation we've gotten from the Colorado attorney general and the governor's office, we believe people who travel here are protected," Carlson says. "But most average citizens aren't lawyers and don't know what their rights are when they travel across state lines to access a legal service in a different state. And it's important to remember that abortion care may come with a lot of shame and stigma — and the fear that someone in their community could potentially report them can add to that."

Staffers at Cobalt Colorado are feeling the stress, too. "The metaphor I've used is that we're building the plane as we're flying it," Carlson explains. "This work matters so much to us that the silver lining is knowing that we are helping so many people every single day, and we're not in a position where we've been forced to pause services or scale back. So we're able to fight against these ridiculous bans and this elimination of a human right — and it feels powerful to be doing this work. But it can be daunting and heartbreaking at times, and folks in this movement haven't had time to process our own feelings about this decision, because we've been so underwater."

And the flood is unlikely to recede anytime soon.
KEEP WESTWORD FREE... Since we started Westword, it has been defined as the free, independent voice of Denver, and we'd like to keep it that way. With local media under siege, it's more important than ever for us to rally support behind funding our local journalism. You can help by participating in our "I Support" program, allowing us to keep offering readers access to our incisive coverage of local news, food and culture with no paywalls.
Make a one-time donation today for as little as $1.