Why "Choice" Wasn't a Buzzword at Denver Abortion-Rights Protests 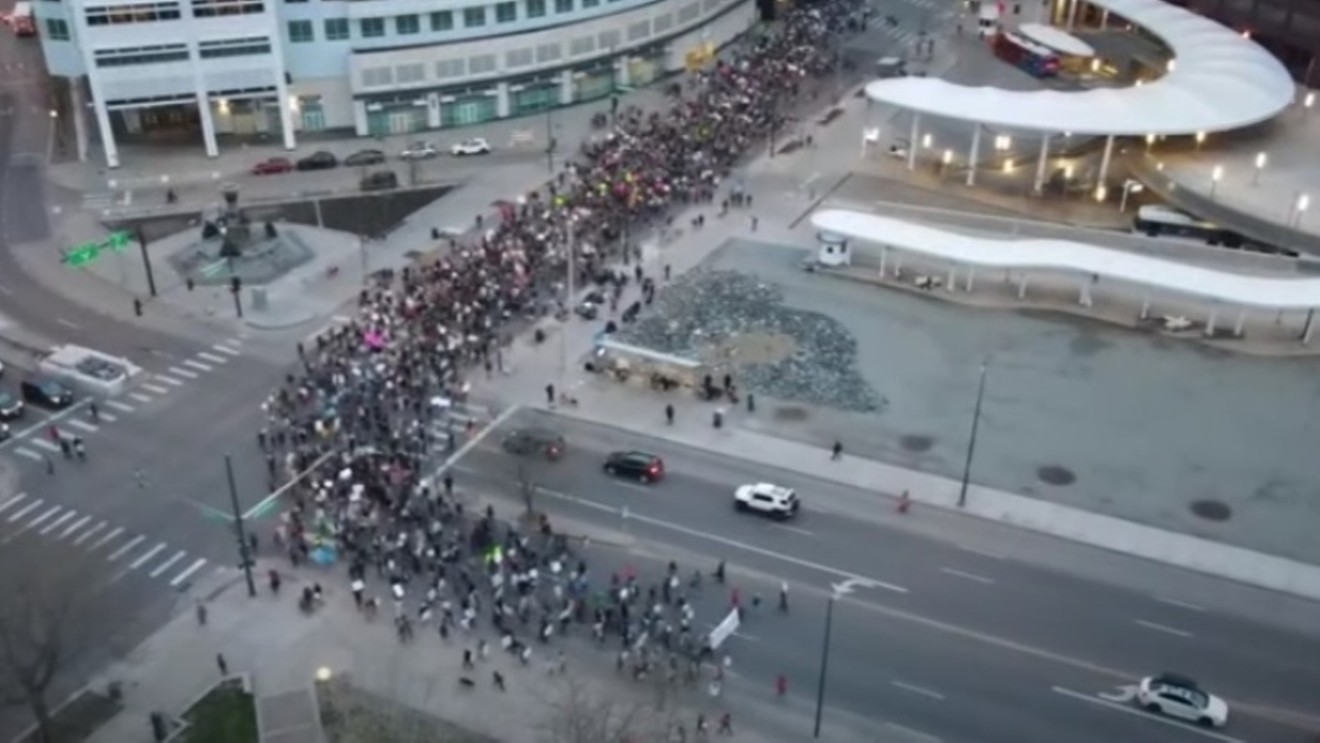 An bird's eye view of abortion-rights supporters marching in downtown Denver on May 3. 9News via YouTube
Throngs of Coloradans poured into downtown Denver on May 3 to protest the likelihood that the U.S. Supreme Court will soon overrule Roe v. Wade, the landmark 1973 decision that guaranteed the right to abortion in the United States, based on a draft opinion by Justice Samuel Alito leaked the previous evening. But "My Body, My Choice," a phrase familiar from decades of demonstrations on the subject, was hardly the dominant message delivered by participants. More common were signs with slogans such as "Keep Abortion Legal" and "We Won't Go Back! We Will Fight Back!"

According to Karen Middleton, president of the advocacy organization Cobalt Colorado, the reason "My Body, My Choice" is less prominent at such protests isn't because the slogan was usurped by individuals opposed to mask mandates at the height of the COVID-19 pandemic. Rather, it's because options for women in plenty of states across the country are already in short supply.

"I think the choice narrative is a little bit of a false flag," she says, "because so many people in our country haven't had true choice, because access has been so limited. There was never a lack of access with masking. Everyone had access to vaccinations and tests and masks; you could probably get a hundred masks free at some stores right now. But if you live in a state where abortion access is severely limited, do you really have a choice? That's why a lot of us are moving away from the pro-choice term."

If the Supreme Court does indeed nix Roe v. Wade, women in Colorado will still have legislative protection. Last month, Governor Jared Polis signed HB22-1279, the Reproductive Health Equity Act, whose summary declares that "every individual has a fundamental right to use or refuse contraception; every pregnant individual has a fundamental right to continue the pregnancy and give birth or to have an abortion; and a fertilized egg, embryo, or fetus does not have independent or derivative rights under the laws of the state."

Middleton doesn't think this law is enough. She wants abortion rights, which have been part of Colorado's fabric since the state became the first to legalize the procedure in 1967, to be enshrined in the
Colorado Constitution — and she believes the 1984 amendment that cut off all public funds for abortions should also be extracted.

"The constitutional state funding ban needs to be overturned," Middleton maintains. "And it also makes sense to propose improved language, perhaps from the bill we just saw passed, to affirm access, so it's not at the whim of whoever is in control of the legislature at a given time."

Such a measure isn't being considered for this November's Colorado ballot, though. "We're waiting until 2024 so we've got time to really talk to voters about what it means and why," she notes. "Also, this is a mid-term election that doesn't turn out as many voters, and since we had a trifecta at the federal level last election, winning the House, the Senate and the presidency, the pendulum always swings back. It's not a good year to run a ballot measure when we have so many other things in play."

That includes the shaky future of Roe v. Wade, which caught many Americans by surprise, Middleton says: "Whether you live in Colorado or Arizona or wherever, I think a lot of people heard the news and thought, 'How did that happen?' Because most people weren't expecting a law that's been settled for so long to be overturned."

Still, Middleton rejects the narrative circulating among Republican pundits that abortion rights aren't nearly as big an issue for progressives as for conservatives. "I think progressives haven't been as focused on abortion rights because they believed they were secure and that Roe v. Wade was solid," she says. "There have been threats and attacks and chipping away at it, but at the end of the day, progressives didn't think it was as urgent as other things they're focused on. But I feel like this was waking a sleeping giant, and it's not just a partisan issue." She points to 2020's Proposition 115, which would have prohibited abortions at 22 weeks in Colorado: "It was defeated by 59 percent, which is a higher percentage than either President [Joe] Biden or Senator [John] Hickenlooper got. So there is bipartisan support."

Does Middleton think some of the anti-maskers who've rocked "My Body, My Choice" signs are among those backers or could be persuaded after their recent experiences? "They might be," she concedes. "I think libertarians and constitutional conservatives have also supported abortion access, but maybe more on the side of 'The government shouldn't be interfering.' And I think there are a lot of people who've been afraid to speak out but are willing to vote with us. I know a lot of Republicans vote with us on this issue, but don't talk about it. And the Republican Party used to support choice back in the day. It's tough to call back those times, but I can hope."

In the meantime, Middleton understands why so many Coloradans took to the streets over the threat to abortion rights, despite the legal protections in this state. "People everywhere are paying attention now," she says. "So you need to register to vote, you need to voice your concerns, you need to talk to your friends and neighbors, and you need to make sure elected officials know how you feel. A lot of folks hoped issue groups would support this work and they could do other things. But we need every single one of them now."
KEEP WESTWORD FREE... Since we started Westword, it has been defined as the free, independent voice of Denver, and we'd like to keep it that way. With local media under siege, it's more important than ever for us to rally support behind funding our local journalism. You can help by participating in our "I Support" program, allowing us to keep offering readers access to our incisive coverage of local news, food and culture with no paywalls.
Make a one-time donation today for as little as $1.