Lots of people have tried the Guitar Center water fountain. Catie Cheshire
Early last month, Zach Evans, a local property manager and aspiring musician, went to the Guitar Center at 1585 South Colorado Boulevard because he felt like spending money. While there, he bought a gig guitar, and then, on his way to the restroom, he spotted a water fountain.

One slurp, and he found heaven.

“There’s just something about that specific water fountain that is godly,” Evans says. “A lot of people think it's a joke but, legitimately, it is the best water fountain I have ever drank from in my entire life. It's not even close. It literally is so precise, so crunchy, so deep-fried. It's just fantastic.”

Evans made a TikTok about the fountain, describing just how good its water is. A month later, his TikTok has nearly 52,000 likes, over a thousand comments and more than seventy duets, a TikTok feature that lets other people film in tandem with a previously made TikTok. Some of the duets have even more likes, with one reaching over 300,000. 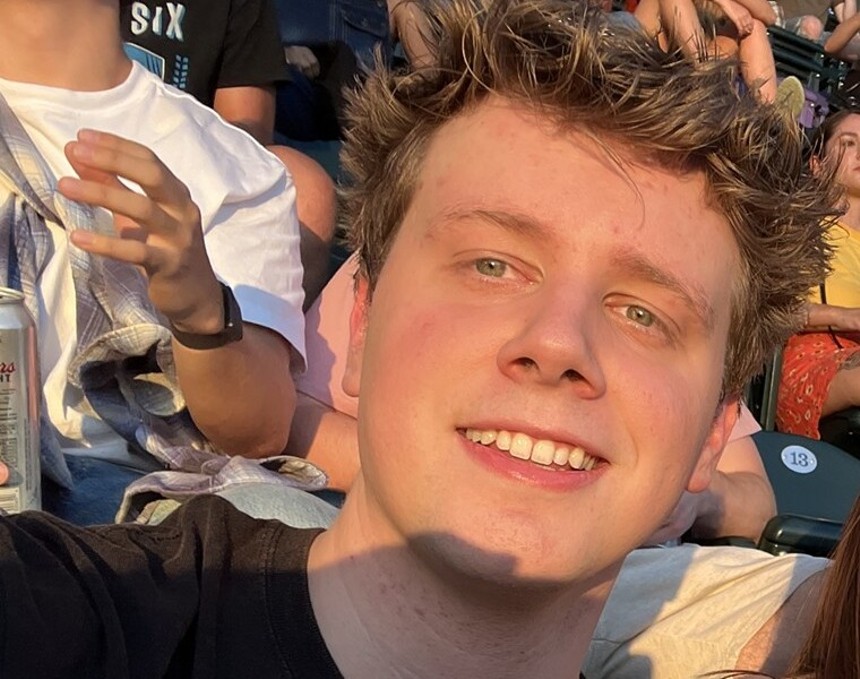 One sip, and Zach Evans found heaven!
Zach Evans
Now people are making the trek to South Colorado Boulevard to taste the water — and not just people in the Denver area, either.

One TikTok viewer, Roman Justis, was driving with his family from Oregon to Colorado Springs to visit his grandparents when he suggested a stop at Guitar Center on August 2. “I mentioned it to my parents, and they thought it was also pretty funny,” he says. “It’s water, a better-than-average water fountain.”

Evans has become friends with a few people who have visited the fountain and shared their experience on TikTok. “It's just wild that people are investing time into it,” he says. “I'm all about the memes…anything ironic or sarcastic. I just appreciate people who are on the same wave.”

Guitar Center employees are riding that wave, too. They installed a disco light over the fountain a few days after Evans's TikTok took off.

Tony Buffalo, Guitar Center’s district manager, learned of the TikTok when his fifteen-year-old son showed it to him. “We laughed and we chuckled, and then, a couple of days later, he comes back and he says, ‘Hey, Dad!’ and we saw it was blowing up,” Buffalo recalls.

According to Buffalo, store employees have enjoyed meeting so many people who might not otherwise visit this Guitar Center. He hasn't had a chance to try the water yet, but plans to do so next time he’s in the area. “We weren’t doing anything to the water, or the water fountain,” Buffalo says. “It was just there. It’s become iconic.” The Guitar Center water fountain promises a secret party.
Catie Cheshire
It's become so iconic that people started flooding Google reviews for the store with five-star comments about the water fountain, some from legitimate visitors and others not. In one review, someone claimed that his dog had died and his wife had left him, but after drinking from the Guitar Center fountain, he knew he'd be okay.

All those reviews are gone now. According to Buffalo, Google noticed the trend and removed them so that people who simply wanted to know about Guitar Center, rather than the water fountain, would have access to accurate information. The Guitar Center at 1585 South Colorado Boulevard.
Catie Cheshire
Evans is a frequent customer at this Guitar Center location. He makes music under the name almost quincy, because his mom almost named him Quincy, and he likes to think about how the smallest thing can change everything.

“Quincy takes a little bit longer to say than Zach, and those seconds, or milliseconds, add up,” Evans says. “It tells you where you're sitting in your kindergarten class. I could have been someone completely different. That could have completely changed my life.”

On that day in July, the smallest thing was tasting the water at Guitar Center for the first time, which Evans says he never would have done if he hadn't had to backtrack and get the bathroom code from an employee.

“The analogy I like to use is, imagine if LeBron James never picked up a basketball?” Evans says. “What if I never went to that water fountain? Nothing, truly, has ever compared to that water fountain in my life.”
KEEP WESTWORD FREE... Since we started Westword, it has been defined as the free, independent voice of Denver, and we'd like to keep it that way. With local media under siege, it's more important than ever for us to rally support behind funding our local journalism. You can help by participating in our "I Support" program, allowing us to keep offering readers access to our incisive coverage of local news, food and culture with no paywalls.
Make a one-time donation today for as little as $1.