How Will a Proposed Tiny-Home Village for the Homeless Be Governed?

Sandra Hermans is looking forward to living in a tiny home with her pets. Chris Walker
Update (March 31): Denver's Department of Community Planning and Development has approved a zoning application for the tiny home village to built at 3733 Walnut Street. According to the group behind the project, the Colorado Village Collaborative, the permit is the first of its kind to be issued in Denver. "This permit is only the first step toward developing new zoning that will allow for permanent tiny home communities" the group said in a press release.

When Sandra Hermans was selected as one of the residents for a proposed tiny-home village at 38th and Walnut streets in RiNo, she was thrilled.

The 27-year-old has been homeless since January, when she had to leave a friend's place where she’d been staying. Suddenly, Hermans found herself having to navigate Denver’s homeless shelters, and she quickly ran into a problem: Most shelters wouldn’t let her in because Hermans has three pet rats, which she adores and refuses to abandon.

“I can’t take them to shelters, because they’re not service animals,” Hermans explains. “That gives me zero options, because I can’t just leave them."

While experiencing homelessness for the first time in her life, Hermans has had to sneak the pets into various shelters. During times when she’s been caught, she’s been forced to sleep on the streets. In mid-February, her laptop was stolen while she camped out under a tree. Hermans was getting desperate.

Fortunately, she learned about a proposed tiny-home village that a coalition of homeless advocates, the Colorado Village Collaborative, has been working on for months. Sandra was one of fifty people who were interviewed by members of Denver Homeless Out Loud on February 18 for the opportunity to live in one of eleven tiny homes at 38th and Walnut streets.

Hermans, who was not one of the six original residents selected, got approved during a second round of applications — during which the first six residents got to choose the rest of the people they wanted to live with.

According to Cole Chandler of the Beloved Community Mennonite Church, another stakeholder in the project, residents were chosen based upon their enthusiasm, and were given priority if they were restricted from, or had issues getting into, Denver’s shelters.

Among the fourteen selected residents for the Beloved Community Village are a few couples, a transgender person, a person in a wheelchair and Hermans, who has pets.

Both Chandler and Hermans are also excited about the system of governance that would be piloted over a 180-day period at the tiny-home village.

In preparation for the village, coalition stakeholders, including members of Denver Homeless Out Loud and the Alternative Solutions Advocacy Project (ASAP), have been drawing up a framework for how the tiny-home community will be run — much of it inspired by examples of other tiny-home villages across the country, such as the Community First! Village in Austin, Texas, and Dignity Village in Portland, Oregon. 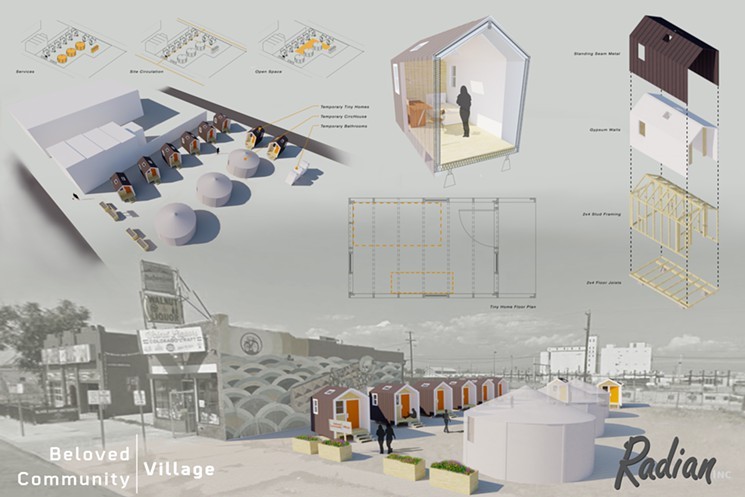 An architectural diagram of the proposed tiny-home village in RiNo.
Radian
Chandler says that Denver's tiny-home village will have two governing bodies, each with equal authority. The village council will comprise the fourteen residents, and the advisory council will include two residents and a handful of representatives from the Colorado Village Collaborative.

The bodies have slightly different roles. The village council will operate much like a co-op, overseeing the day-to-day operations at the village and mediating any conflicts that may arise. Hermans says that she and her fellow residents will vote on matters using a super-majority consensus. “From what I gather, it’s a lot like Greek democracy," she says.

Some of the things that the village council will decide on include curfew and noise regulations, security measures, and whether to allow consumption of alcohol or marijuana.

“One of the things that we’re trying to remove is an us-and-them situation, where you show up at a place and somebody else is in charge of you," says Chandler. “There is no hierarchy. Everyone’s going to have a say about their own lives."

The advisory council, on the other hand, will fundraise on behalf of the residents, secure access to resources such as food and gardening supplies, and coordinate public relations.

Chandler also stresses that residents will police themselves by taking turns operating as the village’s peace officer/security guard. “This is not a free-for-all,” he says, adding that a resident will be on duty 24/7 ensuring security.

The residents have already signed a basic agreement promising to refrain from violence, belligerent and aggressive behavior, and consumption of illegal narcotics.

Chandler acknowledges that the tiny-home village at 38th and Walnut is right next to a liquor store, and there has been concern about alcohol abuse voiced by surrounding neighbors.

“But alcoholism is a real struggle regardless of your status,” says Chandler. “Something I learned long ago is that people have a double standard for things like this.”

After repeated meetings, the Beloved Community Village project has gotten endorsements from the RiNo, Cole and Curtis Park neighborhood organizations.

The project is also being sponsored by Bayaud Enterprises, ASAP, the Interfaith Alliance of Colorado, Denver Homeless Out Loud, Denver Relief Consulting, Radian (which provided architecture and design plans), and the Urban Land Conservancy, which owns the property in RiNo and is leasing it for one dollar a month for the duration of the 180-day pilot period.

Chandler notes that the project has not yet been formally approved by Denver’s Department of Community Planning and Development, though a formal application was turned in on March 5, with the city having three weeks to respond.

When Westword reported on the tiny-home village last Friday, Amber Miller, a spokeswoman for the mayor’s office, said, "In late 2016, discussions began in earnest for a pilot project at 38th and Walnut, on property owned by the Urban Land Conservancy…. If the zoning permit is approved, the next steps will include a site plan review. If approved, the final steps would involve building permits for the proposed structures, and inspections once the construction is complete.

"Our focus throughout this effort is ensuring healthy and safe living conditions for individuals," she added.

The Colorado Village Collaborative hopes that the Beloved Community Village in RiNo is just the first of multiple tiny-home villages throughout metro Denver.

Westword
“Our goal is to have five locations by next summer,” says Chandler. “Each and every village will have their own agreement.”

Homeless advocates are already scouting additional locations and seeking landowners like the Urban Land Conservancy that are willing to provide affordable rents for this innovative housing solution to homelessness.

“I think that the more successful this is [in RiNo], the more we can get additional ones built, which would be great for everyone," says Chandler.

Hermans is excited for the opportunity to live — for six months, at least — in a tiny home and get her life back on track. She’s already planning on customizing her house with potted plants, “maybe some tomatoes, to make it a little more homey.”

She also is looking forward to not having to hide her three pet rats, Teddy, Scout and Phantom, anymore.

On Wednesday, March 15, the Colorado Village Collaborative launched a GoFundMe campaign with the hopes of raising $20,000 for tiny-home villages in Denver. It raised over $3,500 in the first 24 hours.