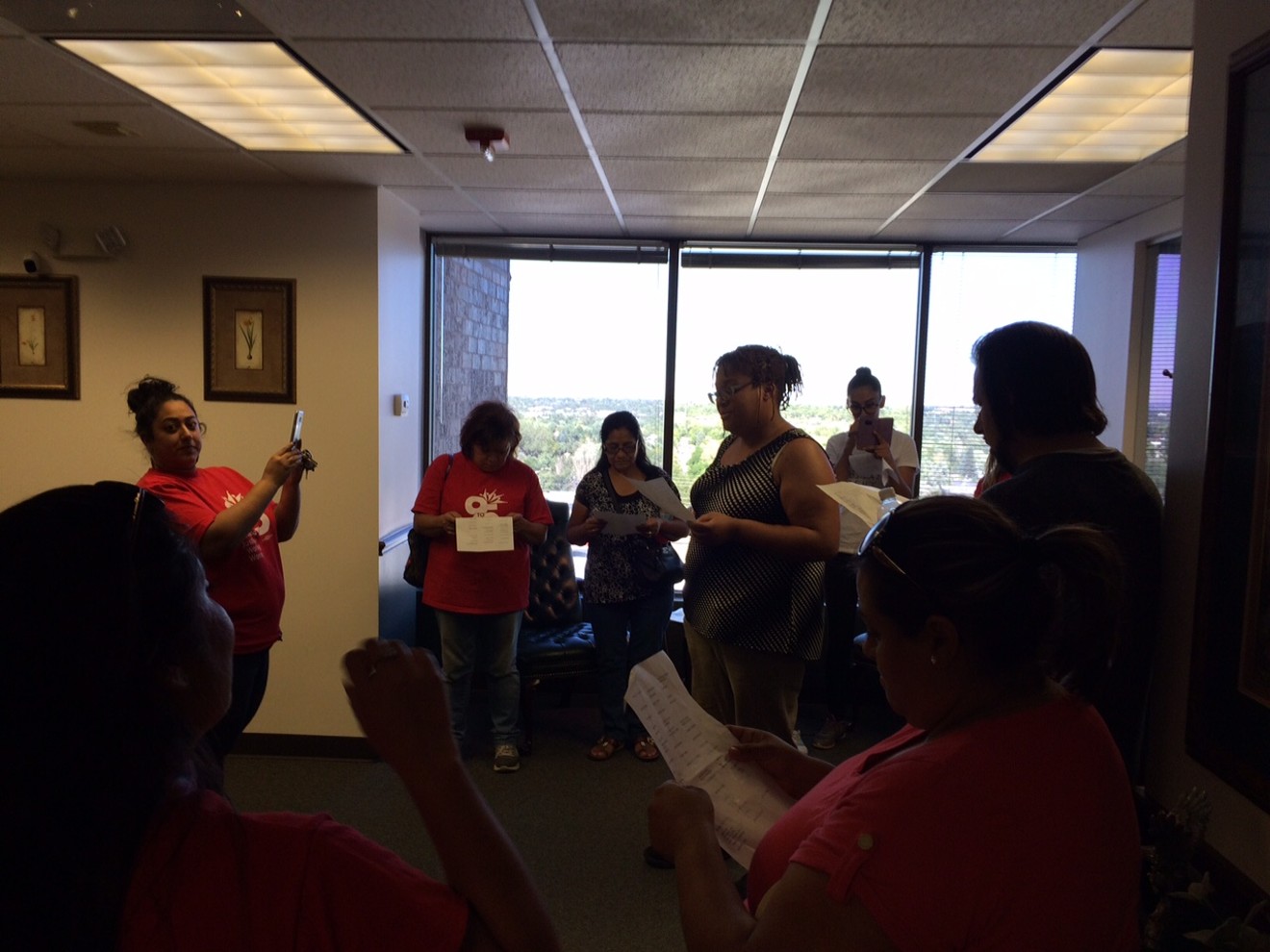 Grant Stringer
Housing and workers rights activists with the Colorado Homes for All Coalition disrupted a law firm that describes itself as "Colorado's #1 Evictor" on September 20 with eviction notices of their own.

Approximately two dozen activists plastered the doors and elevators of eviction law firm Tschetter Hamrick and Sulzer with eviction notices and shouted the names of hundreds of individuals who had been evicted by the firm before being asked to leave.

Jenee Donelson, one of the activists, is also one of thousands of tenants who have been evicted by the law firm, which represents commercial and residential landlords across the state. She says that a corporate landlord had taken advantage of her by refusing to give receipts of payments, and then had her wrongfully evicted in 2012.

"I was young and stupid," she says. "I didn't know that I could fight it.... It was a blur and very traumatic, and I had nowhere to go."

Donelson was forced to couch-surf on and off for five years in Denver and Longmont while earning a certificate in early childhood education, and says that it was very hard to find a place for rent with an eviction on her record.

"It took five years to get a home," she recalls. "All because of that one eviction."

A representative of the law firm initially declined to comment on the protest, but later added, "We're just a business with clients." The firm provides consultations and legal representation to both commercial and residential landlords and property-management companies, and also runs eviction workshops to explain the process to clients.

The firm is the largest specializing in evictions in the state, according to eviction researcher Jack Regenbogen of the Colorado Center on Law and Policy, who adds that the firm is likely to be representing a landlord on any  given eviction case. A representative from the firm would not confirm this and directed Westword to public records, citing attorney-client privilege.

Copies of the mock eviction notice were plastered to doors, walls and elevators in the law firm's office complex, which called the firm "immoral" and "greedy." The office's property management considered calling the police, but the protesters left on their own.

Activist Andrea Chiriboga-Flor, who is affiliated with workers'-rights group 9to5 Colorado and the coalition, says that sending a message to the law firm and landlords is particularly important as the Denver metro becomes more desirable — and more expensive for renters. Every week, an average of about 850 Colorado residents are evicted, according to a recent report from the Colorado Center on Law and Policy and the Colorado Coalition for the Homeless, which Regenbogen co-authored. Of those 850, neighborhoods with a majority of residents of color experience the highest rate of evictions as rent is raised.

In that analysis of 93,000 evictions between 2001 and 2016, the center found that the successful challenge of an eviction mostly depended on whether the tenant hired an attorney — but tenants only found legal representation 1 percent of the time, while landlords lawyered up in 80 percent of those cases.

And in the rare instance that a tenant successfully fights the eviction in court, an eviction will still be present on their record.

Regenbogen agrees, saying that there is a "desert" of legal representation for tenants, and calls for more public resources provided for tenants' defense. "Its an incredibly important issue," he adds, "and the city, to their credit, is beginning to have discussions about how to address the eviction crisis."