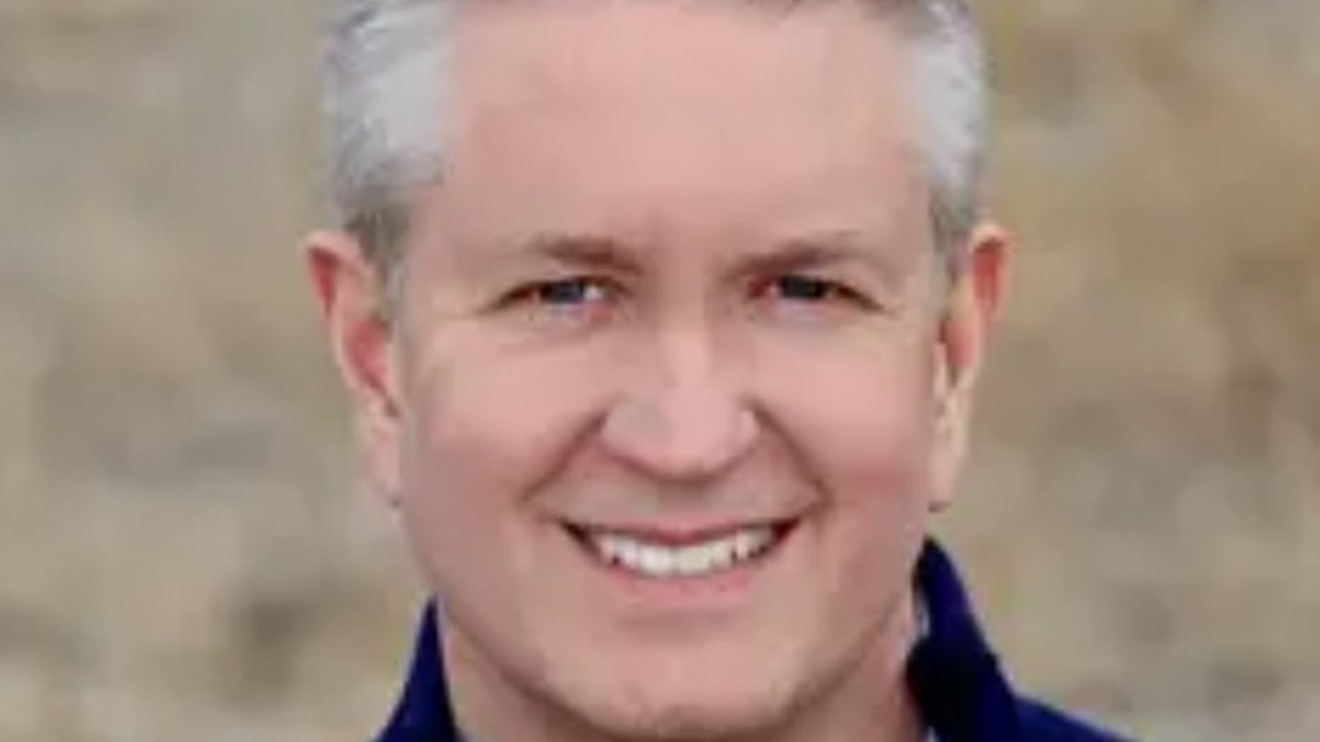 A portrait of Tyler Tysdal. YouTube
Tyler Tysdal was among Denver's most prominent financial figures, a fund manager and husband of former KWGN/Fox31 host Natalie Tysdal, known for rubbing shoulders with NFL stars. But his renown has transitioned to infamy: Tysdal has pleaded guilty to two counts of securities fraud in Denver District Court.

The charges could land Tysdal in prison for up to eight years. In addition, the Denver District Attorney's Office notes that he's expected to pay "at least $2 million in up-front restitution as part of his plea agreement."

The two counts represent a big reduction from the total number of charges Tysdal had been facing, as DA's office spokesperson Carolyn Tyler noted for a story in February. Regarding a December 2019 grand jury indictment, she wrote, "Mr. Tysdal is charged with 67 counts. ... The highest charge is violating the Colorado Organized Crime Control Act (F2). He is also charged with multiple counts of securities fraud (F3), conspiracy to commit securities fraud (F4) and one count of theft (F2)."

A second indictment was pressed in December 2020. In that, Tyler continued, "Mr. Tysdal is charged with three counts of securities fraud — untrue statement or omission (F3)."

This wasn't the first time Tysdal had found himself in legal jeopardy. In September 2019, the federal Securities and Exchange Commission revealed that he had personally paid around $1.1 million to settle a series of complaints. Here are the details, from the SEC release about the case:


The Securities and Exchange Commission...announced settled fraud charges against Tyler T. Tysdal of Lone Tree, Colorado, for his role in multiple schemes to defraud investors.

First, the SEC's order finds that between January 2014 and October 2016, Tysdal and his business partner Grant M. Carter of Johns Creek, Georgia, defrauded investors of Cobalt Sports Capital, LLC, an entity they formed to make loans to athletes and sports agencies. According to the SEC's order, rather than using investor proceeds to make loans to athletes, Tysdal and Carter diverted over $15 million to the cash-strapped startup portfolio companies of Impact Opportunities Fund, L.P., a private fund that Tysdal managed through his investment adviser Impact Opportunities Fund Management, LLC (IOFM) and concealed those loans from debt investors in Cobalt. Ultimately, each of the portfolio companies failed, resulting in significant losses to debt investors in Cobalt.

Second, the SEC order finds that Tysdal and IOFM defrauded the Impact Opportunities Fund and its investors by, among other things, charging the fund undisclosed monitoring fees, a portion of which went to Tysdal.

Third, the SEC order finds that Tysdal defrauded private fund TitleCard Capital 1Fund, L.P. and its investors through two advisers that he controlled, TitleCard Capital Management, LLC (TCCM) and TitleCard Capital Group, LLC (TCCG). According to the order, Tysdal and the two advisers breached the fund's concentration limits by causing the fund to purchase Cobalt from Impact Opportunities Fund at the end of 2015. The order finds that TCCG and Tysdal defrauded the fund and its investors by falsely valuing the fund's investment in Cobalt in reports to investors, effectively concealing the concentration limit breaches.

The SEC also announced settled charges against two other individuals, Britt J. Haugland and Michael A. DeJager, for their roles in Tysdal and Carter's fraudulent schemes. The SEC's order related to Haugland finds that she assisted Tysdal and Carter's scheme to divert investor funds from Cobalt to the portfolio companies, while the SEC order related to DeJager finds that he was a cause of TCCG's violations.

The SEC's orders find that Tysdal, TCCM, and TCCG willfully violated Sections 206(1) and 206(4) of the Investment Advisers Act of 1940 and Rule 206(4)-8 thereunder, and that DeJager caused TCCG's violations of Section 206(4) and Rule 206(4)-8. The orders also find that Tysdal willfully violated, and Carter violated, Sections 17(a)(1) and 17(a)(3) of the Securities Act of 1933 ("Securities Act") and Section 10(b) of the Securities Exchange Act of 1934 and Rules 10b-5(a) and 10b-5(c) thereunder, and that Haugland caused their violations of Section 17(a)(3) of the Securities Act. All of the respondents consented, without admitting or denying the facts of the SEC's orders, to the entry of cease-and-desist orders. Tysdal also consented to a three-year collateral associational bar and an investment company bar, and IOFM, TCCM, and TCCG consented to censures. The orders require Tysdal to pay disgorgement and prejudgment interest totaling $843,099 and a civil penalty of $320,000, require Carter to pay a civil penalty of $160,000, and require Haugland and DeJager to each pay a civil penalty of $15,000.

The Denver indictments don't name victims, but the Denver Post reported that it had obtained a leaked version listing three quarterbacks who gained fame playing for the University of Southern California: Carson Palmer, who also called signals for the Cincinnati Bengals, Oakland Raiders and Arizona Cardinals during a fifteen-year NFL career, plus Matt Cassel and Mike Van Raaphorst. Overall, losses for 77 investors were estimated to have totaled around $46 million, including $2 million for Palmer, $1 million for Cassel and $100,000 for Raaphorst.

The DA's office summarizes its case with this: "Tysdal ran Cobalt Sports Capital LLC, which made short-term, high-interest loans to athletes and entertainers. Through a complicated financial scheme, Tysdal defrauded investors by making false and misleading statements and by omitting key facts about his business dealings and operations. In total Cobalt obtained more than $46 million from 77 investors. Tysdal pleaded guilty to securities fraud (F3) in this case and agreed to pay more than $18,000,000 in restitution."

The office adds: "Separate and apart from the above-mentioned COCCA case, Tysdal began operating a different investment scam, and a separate criminal case...was filed by prosecutors. Tysdal claimed he was seeking investment capital to fund the national expansion plans of Curious Cork Imports LLC, a wine distributor. He marketed Curious Cork as an importer and brand builder of fine European wines backed by celebrities and athletes. Tysdal made false claims that the company was valued at $15 million and was poised for continued success, that the company’s private label wine alone was expected to soon be worth $25 million, and that investors could expect to see a return of 10 to 15 times their investment. Instead, three investors sustained a total loss of $500,000. Tysdal also pleaded guilty to securities fraud (F3) in this case and agreed to pay $500,000 in restitution."

In a statement, Denver District Attorney Beth McCann notes: "Tyler Tysdal conned people by making promises of exorbitant profits with little risk and by withholding the truth about his business dealings and operations. These are all telltale signs of a scam that reinforce the adage: if it sounds too good to be true, it probably is. We are pleased that we caught this skilled con artist and we thank the many victims who came forward to tell their stories."

Tysdal is scheduled for sentencing at 3 p.m. on January 21, 2022. Click to read the December 2019 and December 2020 indictments.
KEEP WESTWORD FREE... Since we started Westword, it has been defined as the free, independent voice of Denver, and we'd like to keep it that way. With local media under siege, it's more important than ever for us to rally support behind funding our local journalism. You can help by participating in our "I Support" program, allowing us to keep offering readers access to our incisive coverage of local news, food and culture with no paywalls.
Make a one-time donation today for as little as $1.