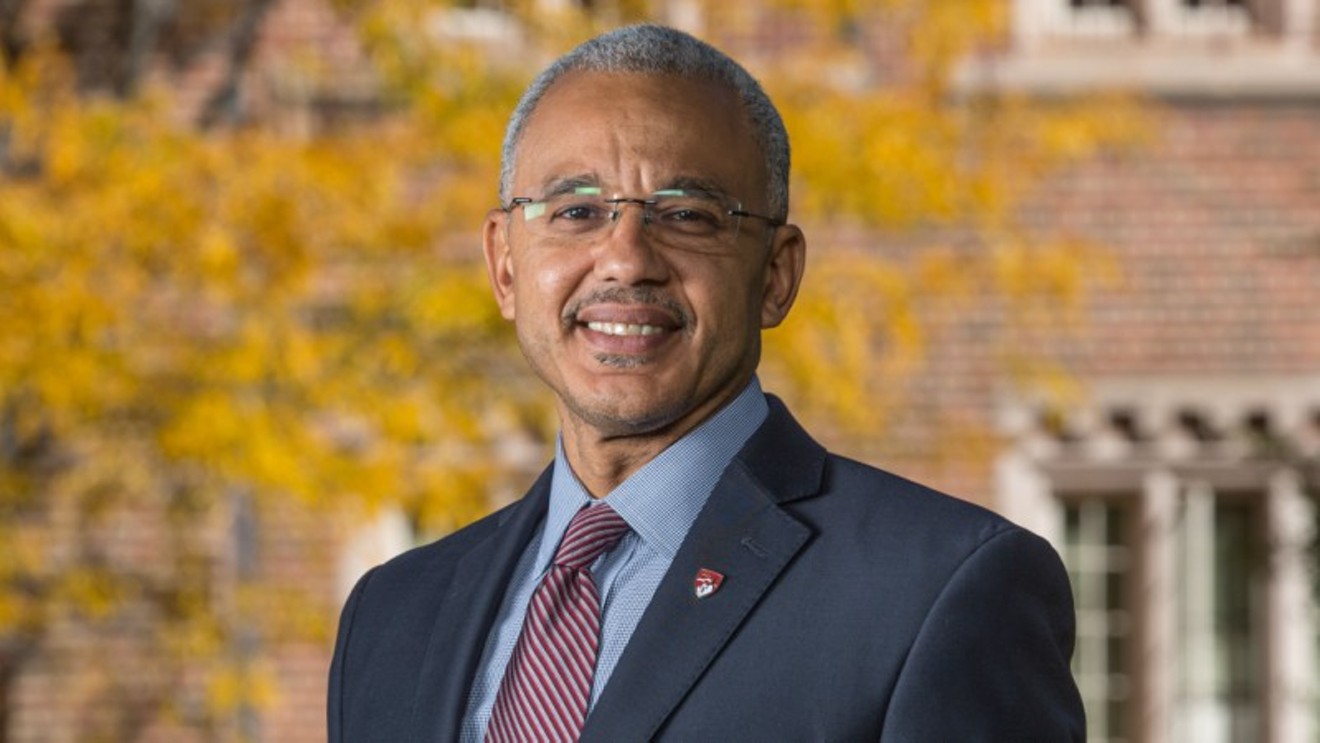 Daniels College of Business Dean Brent Chrite has announced that he'll be stepping down in June 2019. du.edu
Just over two weeks after a Westword report about complaints from fourteen past and current professors at the University of Denver's Daniels College of Business over how they've been treated on the job, Brent Chrite, the institution's dean, has announced that he'll be stepping down at the end of the 2018-2019 academic year.

DU spokesperson Jon Stone is unequivocal in his response to a question about whether Chrite's decision was connected in any way to assorted staffers' criticism of practices and culture at Daniels: "Definitely not," he writes via email. And in a letter to colleagues announcing the decision that was obtained by Westword, Chrite makes no allusions to such troubles. He is consistently upbeat throughout the missive, accessible below in its entirety, and chalks up his impending departure to a realization that after serving five years as Daniels's dean, and ten years as a dean overall, it's simply "the right time for such a transition."

Ron Throupe, an associate professor at the Burns School of Real Estate and Construction Management who has filed a lawsuit against Daniels, declined our request to comment about Chrite's resignation; his case is currently in the discovery process.

Also choosing not to comment is Aaron Schneider, an associate professor in the Josef Korbel School of International Studies, who heads the American Academy of University Professors' DU chapter. But for our earlier post, Schneider said he's personally spoken to ten Daniels profs with gripes and has been told about four more who've shared similar experiences with peers. All of them are professors on multi-year contracts, not adjuncts; several are on the tenure track, while others participate in the college's teaching series.

Schneider grouped their concerns into three main categories: "Humiliations, like having bad scheduling times. Also, things that may violate university policy, such as intrusions into their academic freedom and unusual and inappropriate processes related to tenure and promotion. And other episodes that may approach violations of the law, like discrimination, mistreatment or the creation of a hostile workplace." 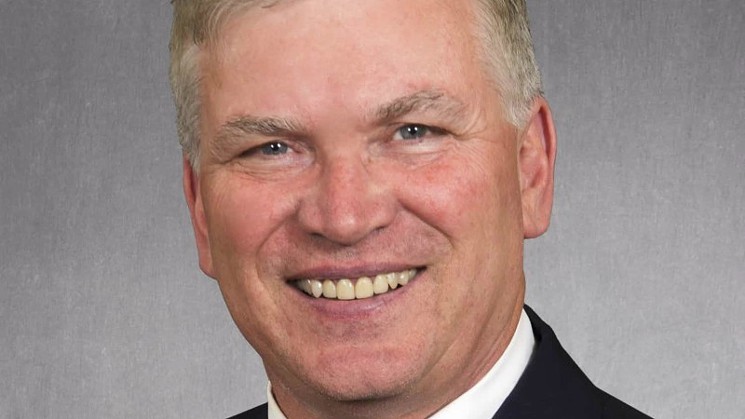 Associate Professor Ron Throupe has filed a lawsuit against the University of Denver.
File photo
In response, spokesperson Stone told us that beyond Throupe's lawsuit, which he declined to discuss because it's an active matter, the university was largely in the dark about the situation. Prior to Westword's inquiries, he said the university's main source of information was a letter Schneider sent last year to a number of officials, including the chancellor, the provost, the associate dean and both the outgoing and incoming presidents of the faculty senate, that discussed the concerns in a general way.

"When I talked to leadership at the college, they didn't know where the number fourteen was coming from," Stone maintained. He added that only three Daniels professors have been denied tenure in the past decade, promotions are handled by peer review and not edicts from higher-ups, and no formal complaints have been submitted in relation to academic freedom.

"We have a professor teaching about marijuana in the school," Stone noted in reference to Sam Kamin, who's made many appearances in Westword over the years. "So the idea that we're telling faculty what they can and can't teach isn't something I've ever heard before."

The Daniels allegations emerged mere months after another public-relations hit at DU: In May, the university paid a $2.66 million settlement in regard to a lawsuit claiming that female law professors had been systematically underpaid compared to their male colleagues for decades. Afterward, Kris McDaniel-Miccio, one of the plaintiffs in the suit, blasted DU Chancellor Rebecca Chopp for neither admitting any wrongdoing on the part of DU nor offering an apology. In McDaniel-Miccio's words, "It is not easy to be a feminist."

Here is Chrite's email announcing his intention to leave his position as Daniels College of Business dean in 2019. 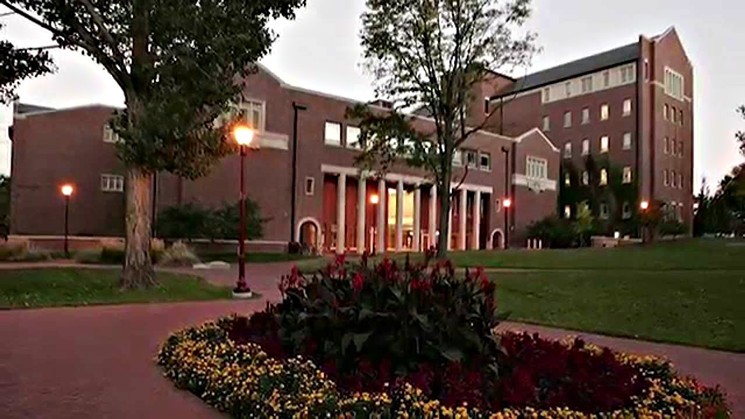 I am writing to let you know that this will be my final year as dean of the Daniels College of Business. I will remain at the College through the end of the 2018-19 academic year, and I look forward to working with each of you during this time to continue to position Daniels for long-term growth and competitiveness. I also will be working closely with Chancellor Chopp and Provost Haefner during this period in support of their efforts to manage a smooth transition process.

This is my fifth year as the dean of Daniels and my 10th cumulatively as a dean. This is the right time for such a transition. I very much look forward to the next step in my own professional journey while being immensely grateful for my experience here. It has been a tremendous privilege to serve as your dean. The College is fortunate to have such extraordinary faculty and staff, and our alumni, advisory board members and many corporate partners and stakeholders are as inspiring as they are generous. I am exceptionally appreciative of your support, your goodwill and your many contributions to Daniels during my tenure.

We have achieved a great deal together and I am especially proud of your support as we worked collectively to pivot the College at a crucial time in its evolution. The rightsizing and rebuilding of our programmatic portfolio, the recent addition of two programs (Executive Ph.D. and [email protected]), and the sustained commitment to curricular innovations reflect some of our more visible accomplishments. We’ve also created an exceptional academic and administrative leadership team.

The last four years, however, have been as much about who we’ve become as what we’ve built. Our ability to coalesce around a compelling and powerful strategic narrative, and to collaboratively migrate from historical silos and orthodoxies in an effort to "re-imagine" management education — while relentlessly focusing on our students and their success — are sources of great pride to me. What makes Daniels special is its spirit of generosity and support and how your expressions of warmth and camaraderie have been so consistently and willingly displayed. I am very thankful for all of that.

We will have plenty of opportunities to reflect on our many accomplishments together and there still is work to be done during this academic year. I look forward to speaking with you about this very soon.

Click to read Ron Throupe et al. v. University of Denver et al.
KEEP WESTWORD FREE... Since we started Westword, it has been defined as the free, independent voice of Denver, and we'd like to keep it that way. With local media under siege, it's more important than ever for us to rally support behind funding our local journalism. You can help by participating in our "I Support" program, allowing us to keep offering readers access to our incisive coverage of local news, food and culture with no paywalls.
Make a one-time donation today for as little as $1.