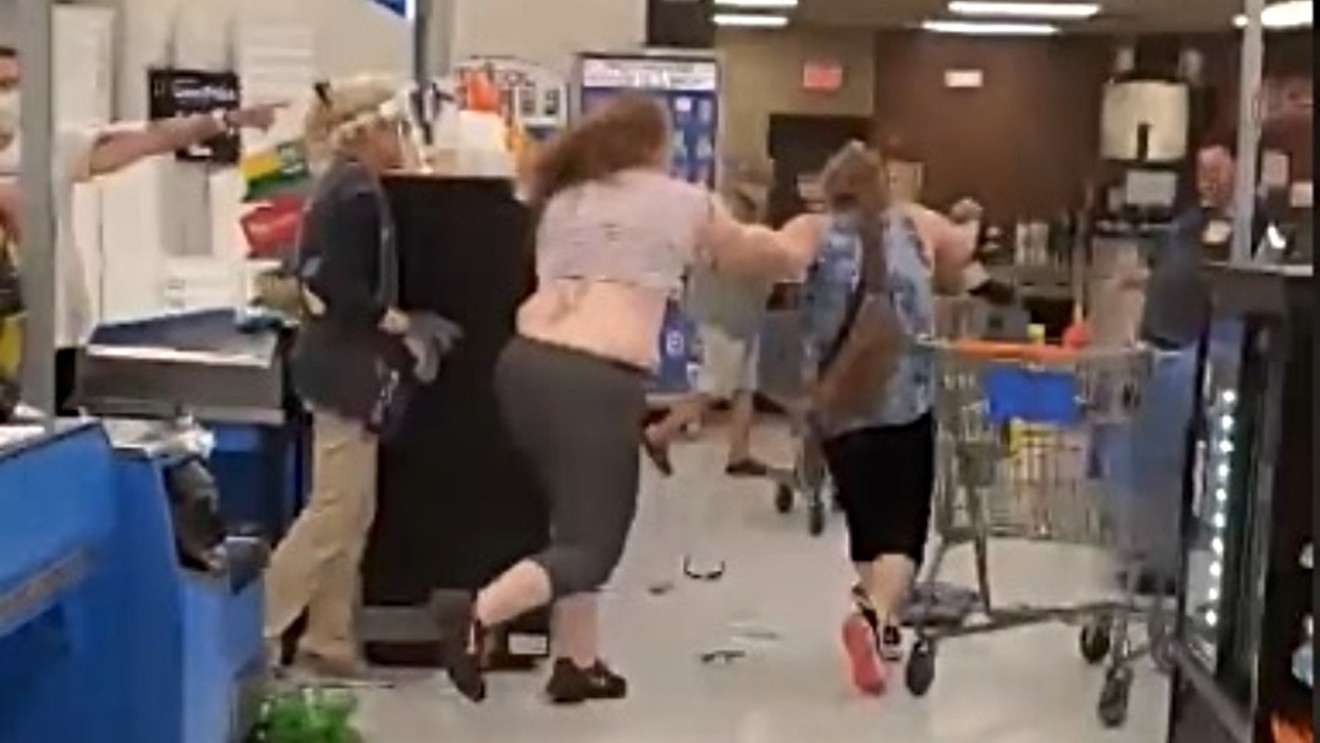 A screen capture from video of a fight over social distancing at a Colorado Springs Walmart on July 30. Brianna Carroll
The biggest surprise in weekend reports about a July 30 arrest at a Colorado Springs Walmart that appeared to have been prompted by a disagreement over social distancing was the lack of video, given that everything seems to be recorded these days.

Now, however, footage of the incident has surfaced, and audio on the clip certainly appears to support initial claims about the motivation behind the dust-up. At the end of footage, a voice can be heard saying, "She wasn't six feet away...."

As a community, Colorado Springs has been slow to adopt many of the safety measures recommended by public-health officials and nationally. Some of the earliest COVID-19 cases were traced to a bridge club in El Paso County, and while infection rates dipped there in June, subsequent spikes placed the area in the coronavirus red zone in late July, according to the Colorado Department of Public Health and Environment.

The Walmart kerfuffle took place at the chain's 3201 East Platte Avenue store in the Springs. Here's what it looked like, as seen in cell phone video captured by Brianna Carroll.


Afterward, the Colorado Springs Police Department reported that sixty-year-old Laura Barr was arrested on suspicion of third-degree assault. Note that neither Barr nor the other woman involved are wearing masks.

Walmart, which made masks mandatory for shoppers and customers alike as of July 20, isn't commenting about what took place. But there's no question that Colorado stores under its banner have done a better job of enforcing COVID-19 safety protocols since an outbreak at an Aurora location was linked to three deaths.

Still, Walmart customers should remember to stay six feet away from the next person in the checkout line — for everyone's good.
KEEP WESTWORD FREE... Since we started Westword, it has been defined as the free, independent voice of Denver, and we'd like to keep it that way. With local media under siege, it's more important than ever for us to rally support behind funding our local journalism. You can help by participating in our "I Support" program, allowing us to keep offering readers access to our incisive coverage of local news, food and culture with no paywalls.
Make a one-time donation today for as little as $1.