Buntport Theater’s The Death of Napoleon Tackles Isolation and Power 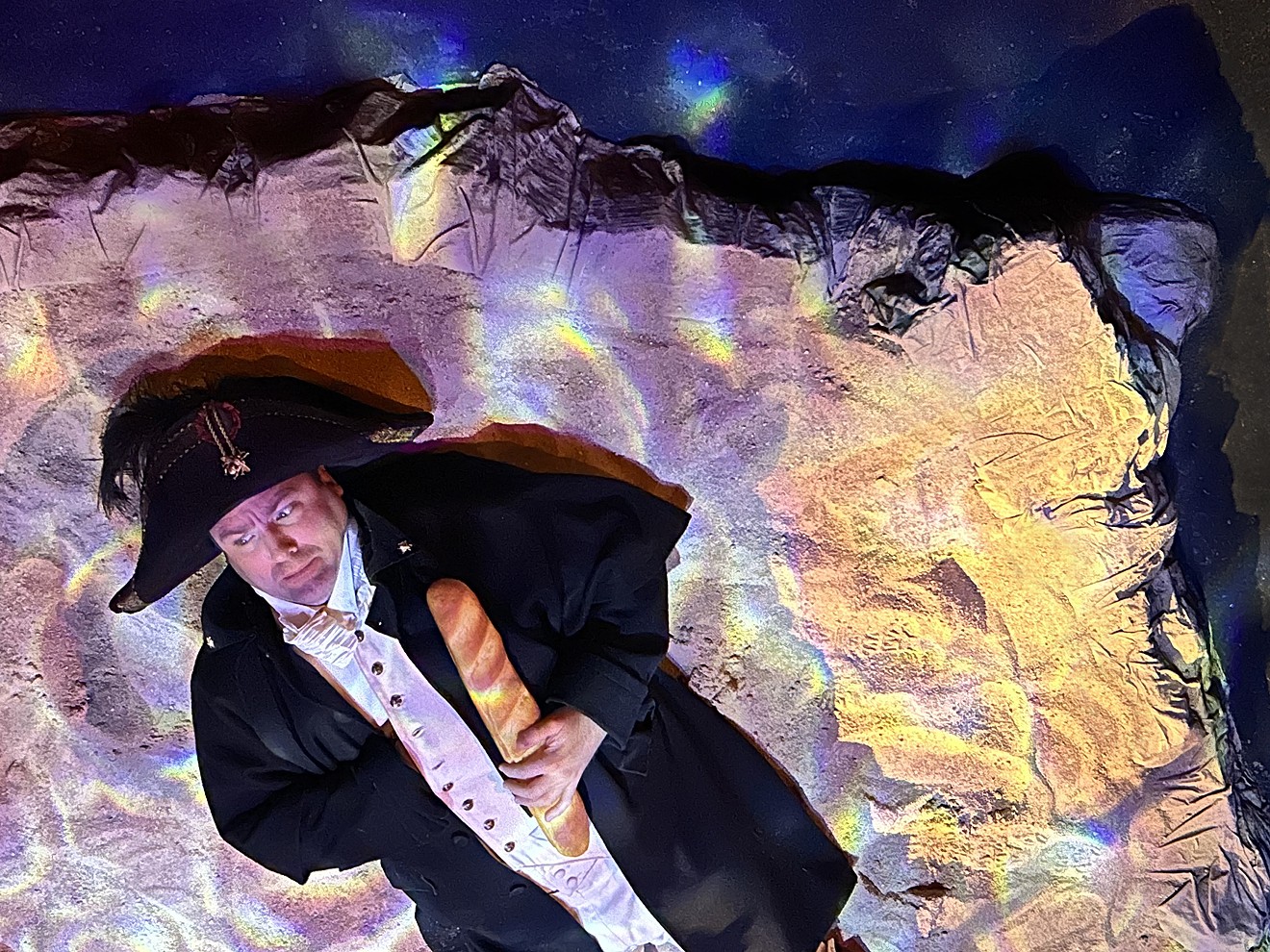 The play weaves true, strange facts about Napoleon into its narrative. Courtesy Buntport Theater
Even the powerful aren’t safe from isolation. That's one of the takeaways from Buntport Theater’s original production The Death of Napoleon: A Play in Less Than Three Acts, which explores what happens to authority figures after they lose their platform.

“The play is about Napoleon’s life and death during his second exile,” says SamAnTha Schmitz, a Buntport ensemble member who runs tech during the shows and handles the nonprofit theater's books. “It started out being about our current lives and being exiled from each other during COVID, but during the writing process, it became a rumination on empires, power, and the people who are desperate to hold on to power."

The Death of Napoleon, which opens Friday, January 27, takes place after Napoleon escaped from his first exile and lost the Battle of Waterloo in 1815. Following that defeat, the British exiled Napoleon to the small island of Saint Helena in the middle of the Atlantic. The production combines historical facts with imagined scenarios to create a play about how Napoleon may have spent the final years of his life.

“Conceptually, there’s something nice about this emperor being relegated to a small island and living out his last years totally isolated from the world that he had exerted so much influence on,” says Brian Colonna, who portrays Napoleon in the play. “And so the show sort of explores what it is like for these men in power to be out of the limelight and be forced to go away.”

When the idea for a comedic show about Napoleon's final days came about, Buntport's quintet ensemble of Colonna, Schmitz, Hannah Duggan, Erik Edborg and Erin Rollman all agreed it had to be produced. Buntport is no stranger to out-of-the-box original work; in fact, that’s what the company thrives on.

Since 1998, Buntport has worked collaboratively to produce new work. “It’s crazy to think the five of us met in college and have been producing shows at this warehouse space in Denver for over twenty years,” Colonna reflects. They decided to form a theater company without hierarchies, which means they all produce, write, direct, act and manage every aspect of production together. 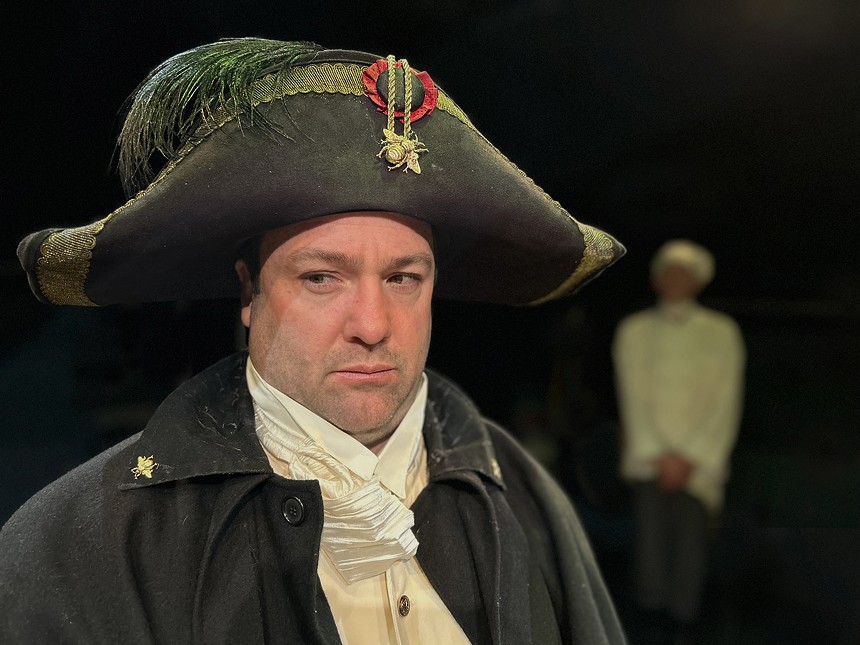 Brian Colonna as Napoleon.
Courtesy Buntport Theater
Buntport has no set season, and frequently chooses a date for a show before it is even written. “Our next original show will happen in May, and we are not entirely sure what it is yet,” Schmitz says. “That’s how we work, which is a little bananas. We know when a show is happening before we know what it will be. When [The Death of Napoleon] opens, we will start conceptualizing and talking about the show that will happen in May.”

Schmitz says that Buntport’s 2022-2023 season is focused on isolation, and Colonna adds, “At Buntport, we always talk about how, when we're writing original work, we are influenced by all the things that are going around. Whether it be in politics or your personal life, this stuff all seeps into the writing.

“We wrote a piece right before Trump came into office about political change, and now, after the pandemic, the world has changed more than I think all of us expected," he continues. "We became focused on the experience of these men, who were once in power, being taken out of the limelight and forced to go away. The idea came from those conversations and all these silly things we read about Napoleon, like that he’d been given a teeter-totter for exercise, which is such a crazy historical fact.”

Colonna notes that the team's research process was broad, with all five Buntport ensemble members researching Napoleon. “After doing all this research, we would have brainstorming meetings before splitting off to write scenes individually,” Colonna says. “We would all hand in the material back to Erin, who is the main editor, to edit these disparate pieces together, and then we started editing one document.”

Since there were so many biographical sources about Napoleon and his time in exile on Saint Helena, the team enjoyed weaving real historical facts into the farcical situation, with scenes of him cheating at cards with the locals or playing on his teeter-totter. “The other interesting thing about the writing and the concept for the show was that we realized that once he got on the island, he dictated his own biography,” Colonna adds. “So you have this other interesting thing happening, where a person gets to be responsible for the way the world thinks of them after the fact. Through his recount of history, Napoleon gets to change the narrative to suit himself, and he definitely rounded out some rough corners.”

Between the humor, the team investigated Napoleon's peculiar circumstance: He went from being a renowned military commander and political leader to being completely cut off from the outside world. The ensemble wanted to dive into the psyche of the disgraced emperor and push back against viewing Napoleon with rose-colored glasses. “Even in his own time, Napoleon was a comedic figure that people wrote satire about and made fun of,” Schmitz notes. “But he was also a serious dictator who declared his empire and took over most of Europe. We talk about him like he was a joke, but he wasn’t. The play is inspired by people like Trump, Mitch McConnell, Vladimir Putin and people who are mad about women’s rights and social justice, who would rather cling to power than make way for new ideas.”

Buntport is excited to welcome audiences into its black-box space for the premiere of the show, and requires that all audience members wear masks. “The Denver theater community has continuously had to shut down shows because of COVID, and we don’t want to shut down any of our eleven shows,” Schmitz explains.

This choice to require masks — along with Buntport’s decision to make its space available for other artists and offer “name your price” tickets — is part of the theater's efforts to increase accessibility to the arts: “I know everyone is tired of it, but we hope people will mask up because along with helping us keep our actors safe, it’s an accessibility issue for immunocompromised people,” Schmitz says. “We don't feel awesome about asking people to wear masks, but we're just trying to do all that we can so that we aren’t helping continue the pandemic, particularly for the most vulnerable.”

As the ensemble works to put the finishing touches on The Death of Napoleon, the members are eager to see how audiences react to the play and its ideas. “Even though we have made fifty shows, as we get older, every time we do a production, it feels like there’s a new challenge to producing a show,” Schmitz says. “At the start, it always feels like we forget how to do it and how much goes into making a play possible. Our process is very insular; no one sees the show until opening night. I always like seeing how everyone reacts. I hope people understand it and everything makes sense.”

“There are a few things in the show that I won't spoil that are just totally absurd and silly,” Colonna says. “It’s this absurdist comedy that I hope people can appreciate on two levels. While you’re here, I hope you’ll laugh, have a good time and go home thinking the play was ridiculous fun. But then, as you're falling asleep, maybe there’s a moment where you consider some of the play’s deeper themes, about the old systems of power dying.”

The Death of Napoleon: A Play in Less Than Three Acts, Friday, January 27, through Saturday, February 18, Fridays, Saturdays and Mondays at 7:30 p.m., Sundays at 3 p.m.,  Buntport Theater, 717 Lipan Street. Get tickets and more information here.
KEEP WESTWORD FREE... Since we started Westword, it has been defined as the free, independent voice of Denver, and we'd like to keep it that way. With local media under siege, it's more important than ever for us to rally support behind funding our local journalism. You can help by participating in our "I Support" program, allowing us to keep offering readers access to our incisive coverage of local news, food and culture with no paywalls.
Make a one-time donation today for as little as $1.