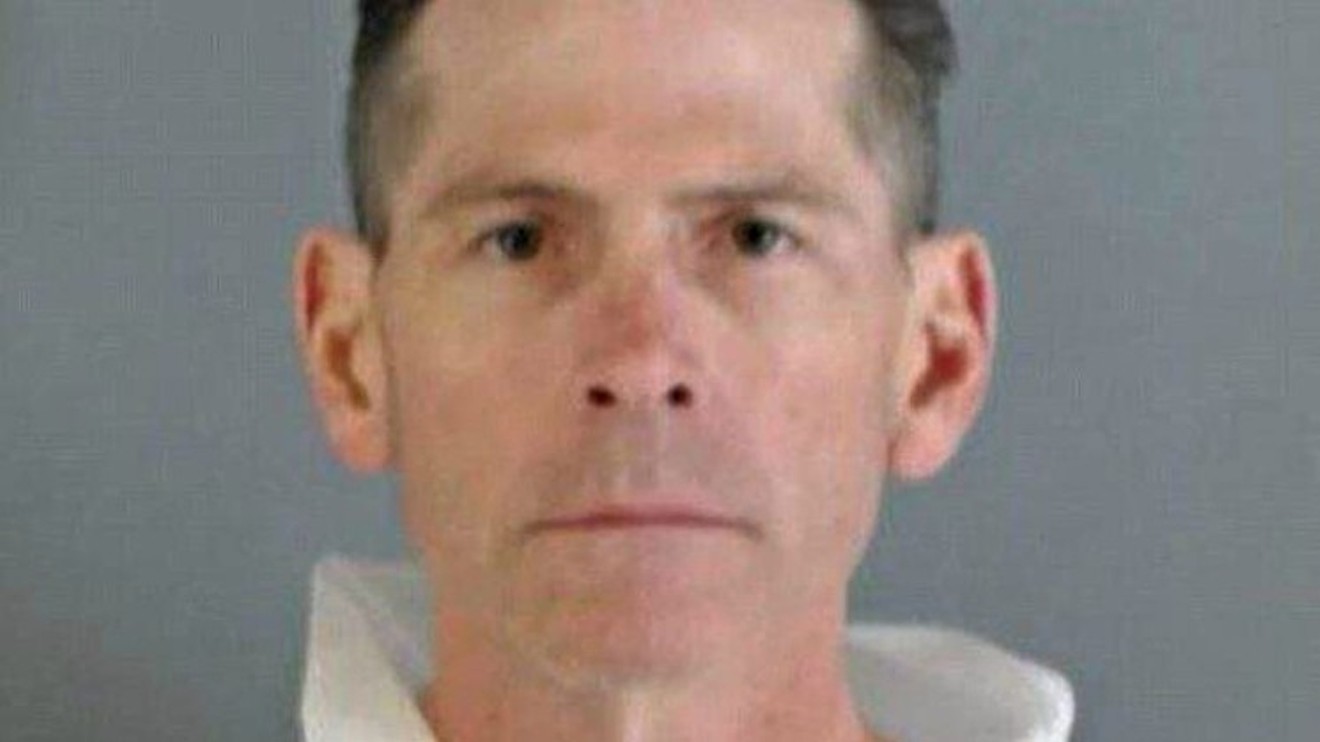 In a statement, 17th Judicial District DA Dave Young said Ostrem made the pleas "to avoid the maximum penalty for first-degree murder in Colorado of the death penalty."

On October 19, Ostrem was sentenced to three life prison terms plus 48 years.

When news about the slayings of Victor Vasquez, Pam Marques and Carlos Moreno broke, many wondered if the assault had been a terrorist act. But it soon became clear that Ostrem, 47, was just another angry, frustrated white man taking out his failings on innocent people.

Calls about the violence at the 9901 Grant Street store began flooding in just after 6 p.m. on the 1st. At 6:27 p.m., the Thornton police Twitter feed issued its initial alert on the topic: "Shooting just occurred at Walmart, 9900 Grant St, multiple parties down. Please stay away from the area."

Scott Ostrem as he was taken into custody after the shooting.
Denver7 file photo
A little over an hour later, the following string of four more tweets began:

7:35 p.m.: "#ThorntonWalmartShooting At this time this is NOT an active shooter. Active crime scene. We will update as info becomes available."

10:08 p.m.: "UPDATE: There is currently NO one in custody. Unfortunately the female transported with injury has also passed away. (3) confirmed dead."

At 11:28 p.m. on November 1, the TPD sent out surveillance images of a male suspect and the red Mitsubishi Mirage he was thought to be driving. Early the next morning, Ostrem was cited by name, and just after 8 a.m., he was taken into custody after being spotted by police driving past his apartment, at 7121 Samuel Drive. Hours later, the Thornton department issued the booking photo at the top of this post.

The late Victor Vasquez.
Facebook
Over the course of the day, more information trickled in about the people who died under the fusillade at the store. Here's the introduction to a GoFundMe page set up on behalf of Vasquez:


As many of you have heard, there was a shooting at the Thornton Walmart. One of the fallen was Victor Vasquez, a father of two beautiful little girls with another child on the way. We are starting a go fund me to help out his fiancé, Alexis, his mom Jovita, and his children. It will be used to help fund his services and any immediate needs that the family may encounter.

In the end, the page's $25,000 goal was exceeded; the total currently stands at just shy of $31,000. Comments left on the page include "Sending...strength to the entire family. I am a local resident who cares and I'm so sorry" and "Your family is in my prayers. My heart is breaking for you all."

According to Moreno's Facebook page, he attended Clovis High School in New Mexico before relocating to Colorado. He was a grandfather, and the page's photo gallery is crowded with loving shots of relatives.

One note reads: "I am in shock. My dear loving uncle Carlos Moreno was one of the victims who lost his life last evening at the Thornton CO Walmart. Please keep his wife and kids in your prayers."

Pam Marques worked for many years at the Packaging Corporation of America. Like Vasquez, she, too, was the subject of a GoFundMe page. Here's the introduction to it:


Last night a heartbreaking incident occurred. 3 families have been changed forever by this. Unfortunately my family was one of those. My dear cousin Brandy has lost her light, her best friend her mom. My aunt Pam was one of those hit by a bullet at the Walmart in Thornton. I’m hoping to reach the goal to help ease the financial burden on my cousin. Anything helps from a penny to a share. No one should have to deal with such a heart breaking thing such as this.

Ostrem, for his part, left behind a slew of official documents associated with previous (and mostly minor) law enforcement interactions, as well as paperwork about his lack of success in business.

Ostrem had been busted for driving under the influence in Adams County in April 1991. Just over eight years later, in December 1999, he admitted to resisting arrest in a plea deal that resulted in the dropping of other charges — assault on a peace officer, possession of dangerous weapons and disorderly conduct. His punishment: a year's probation.

Then, in 2013, Ostrem was accused of another DUI in Wheat Ridge. That beef was lowered to driving while ability impaired, but he was taken into custody again the following year for a failure to appear in court about the previous matter. This last offense earned him a one-year suspended jail sentence.

Around this time, Ostrem tried to set himself up as an entrepreneur. The Colorado Secretary of State's Office lists information about a business called Ostrem Installation LLC circa 2012. It was categorized as "delinquent" in November 2013.

A listing of personal property showed that his most expensive possession at the time of the filing was a 1997 Buick Regal worth $1,550. The list of other assets and their value:

Somehow, though, Ostrem was able to afford guns; neighbors recalled him toting a rifle bag back and forth between his car and his apartment.

On October 11, Ostrem formally pleaded guilty to three counts of first-degree murder after deliberation, one count of attempted first-degree murder with extreme indifference that named the 45 people inside the Walmart when he first pulled the trigger, and a crime-of-violence count that acted as a sentence enhancer.

According to the 17th Judicial District Attorney's Office, DA Young was in the process of deciding whether he would try to fit Ostrem with the death penalty when the suspect's attorneys said he was willing to plead guilty in exchange for a sentence of life without the possibility of parole.

That wish has been granted.

This post has been updated to include information about Scott Ostrem's sentencing.
KEEP WESTWORD FREE... Since we started Westword, it has been defined as the free, independent voice of Denver, and we'd like to keep it that way. With local media under siege, it's more important than ever for us to rally support behind funding our local journalism. You can help by participating in our "I Support" program, allowing us to keep offering readers access to our incisive coverage of local news, food and culture with no paywalls.
Make a one-time donation today for as little as $1.