Looking to the Future From Westword's New, Century-Old Home

The Dodge Building debuted a century ago at 13th and Lincoln. Colorado State Land Board
Last week, Westword celebrated — in what passes for a celebration these days — its 43rd anniversary in a new headquarters that’s a far cry from the space where we created our first weekly issue, which hit the streets on September 1, 1977. Our office then was on the second floor of a Victorian storefront at 1439 Market Street, right above a waterbed/hologram store, in a run-down part of downtown that had yet to be dubbed LoDo. Almost a century earlier, the space had been home to a brothel.

Which, then and now, can sometimes seem like a far more respectable business than a newspaper.

But don’t tell that to our new landlord: the Colorado State Land Board.

History has a way of colliding with current events, pulling the past right into the present, as we’ve seen this summer as Black Lives Matter protests passed by monuments to Christopher Columbus, Civil War veterans, Kit Carson. In October 2018, the State Land Board received a Community Preservation Award from Historic Denver for its work renovating a building at 1278 Lincoln Street, just a block away from those monuments at Civic Center Park and the Colorado State Capitol; at the same event, Historic Denver honored me with the Molly Brown Award, given annually to someone who embodies Margaret Brown’s sense of civic engagement and “unsinkable” spirit.

There have been a lot of times over the past six months, since Colorado found itself in the midst of a pandemic, that my spirits have sunk Titanically low. But walking into our new offices always gives them a boost. History happened here. And having a past suggests a future.

Back in 1903, a year after Denver held its first auto show at what’s the still-shuttered Fillmore Auditorium, businessman Tom Botterill began selling automobiles in the Mile High City, pretty much a one-horse (and buggy) town at that point, after the Silver Crash of 1893. The new industry took off fast, and within a decade, he was selling Dodge Brothers products, including the Model 30, a competitor of the Ford Model T, which boasted an all-steel body at a time when most cars still used wood framing. It also had a lot more power, says Tim Jackson, head of the Colorado Automobile Dealers Association, and that was appealing at the edge of the Great Plains and the base of the Rocky Mountains.

A fancy new car deserved a fancy new setting, and Botterill commissioned architect Thielman Robert Wieger — who’d already designed the Stanley Hotel in Estes Park (1909) and the Weld County Courthouse in Greeley (1917) — to create his new Dodge dealership in the shadow of the Capitol. 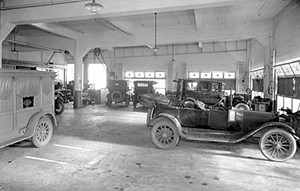 Inside the showroom at the Dodge Building.
Colorado State Land Board
By the start of 1920, Denver’s Automobile Row — also known as the Miracle Mile — had gotten in gear. It was three streets wide and a mile long, extending north and south from the Civic Center. Today, the only dealer still in business on this stretch is Rickenbaugh Cadillac, but some of the best buildings remain, including Howard Lorton Furniture & Design (once home to Studebaker) and the Sports Castle. And the crown jewel: the Dodge Building, a two-story structure that cost $200,000 to build and opened exactly a century ago.

One of Denver’s many newspapers at the time reported that it was “one of the most beautiful automobile display rooms in America...the Tudor Gothic architecture and harmonious furnishings make one feel he has stepped into a corner of England or France.” The showroom included large windows with stained-glass inserts overlooking Lincoln, as well as a large fireplace, framed oak paneling, ornate light fixtures, tiled floors and an elaborately stenciled vaulted ceiling.

The Dodge brothers didn’t live to see their fancy new edifice; both died of the Spanish flu in the last pandemic. Their widows sold the company for $146 million to an investment banking company in 1925; the bankers sold it to Chrysler in 1928 for $170 million.

Ultimately, the cars drove off from 1278 Lincoln. When the Colorado Ballet moved into the space in 1993, it was considerably less glamorous, with plywood covering many of the architectural amenities.

The Colorado State Land Board took over the Dodge Building in 1995. The largest landholder in Colorado behind the federal government, it was set up when Colorado joined the Union in 1876 to manage lands the feds had granted the state in trust to fund schools and other public institutions. Today the State Land Board stewards 2.8 million acres of land, 4 million acres of mineral rights, and over 600,000 square feet of commercial real estate throughout the state, leasing these assets to help fund education. Over the past fifteen years, it’s earned $2 billion for Colorado’s public schools, and serves as the primary funding source for the Colorado Department of Education Building Excellent Schools Today program. (And yes, marijuana taxes pay for some school construction, too.)

Twenty years after it took over the Dodge Building, right after the Colorado Ballet danced off to a new building of its own on Santa Fe Drive, the Armstrong Center of Dance, the State Land Board began renovating the place, restoring as much of the original architecture as possible. “We are incredibly proud that the building now has modern office functionality and shows off the original architectural elements,” says Julie Majors, real estate portfolio agent at the State Land Board. “The coved ceilings and the stained glass are timeless. We did not hire subcontractors to restore the building. We hired artists.” The latest incarnation of the Westword cow.
Chad Bolsinger
As did Westword after we made the decision to move from our home of twenty years at Tenth and Broadway (another former auto dealership, following three other LoDo locations) to 1278 Lincoln. We drafted our plans in the pre-pandemic days, honoring the original architecture that fortuitously created plenty of space for social distancing — and murals created by some of Denver’s best mural artists, including Pat Milbery, the mastermind behind the “Love This City” campaign; Lindee Zimmer; and Chad Bolsinger, who created a classic take on the Westword cow mascot (adopted at a time when city boosters were very concerned with Denver's cow-town, "Omaha with mountains" image), among other things.

Later this month, in another nod to the city’s artists, we’re collaborating with Crush Walls on an after-party when that annual street-art festival ends on September 20 that will adorn our parking lot with work by Hiero Veiga, Anna Charney, Jher Seno and Chelsea Lewinski. It will be a true, belated anniversary celebration of all this city’s creative residents, from business entrepreneurs to educators to artists to, yes, journalists. “We should be painting walls instead of building them,” Milbery told me early this year, right as the pandemic shut down the city. “We should be breaking down barriers instead of allowing barriers to exist between us.”

Like the automobile business, the journalism business has changed almost beyond recognition over the past few decades. When we started Westword, there were two hotly competitive daily papers in Denver, the Denver Post and the Rocky Mountain News. But the Rocky went the way of the Edsel eleven years ago, and the Post is a shadow of its former self. Most of the journalism action has moved online, where new publications are popping up all the time. Westword itself operates numerous platforms, including the 24/7 westword.com.

There will always be new ways to get the word out: print, the web, murals on the sides of buildings. After all, communication is key to breaking down barriers.

See more photos of the new Westword office in our slideshow.
KEEP WESTWORD FREE... Since we started Westword, it has been defined as the free, independent voice of Denver, and we'd like to keep it that way. With local media under siege, it's more important than ever for us to rally support behind funding our local journalism. You can help by participating in our "I Support" program, allowing us to keep offering readers access to our incisive coverage of local news, food and culture with no paywalls.
Make a one-time donation today for as little as $1.