Alternation Brewing Makes the Sixth Denver Taproom to Close in 2020

Alternation Brewing
Alternation Brewing, at 1539 South Broadway, has decided to close its doors, but not before an upcoming send-off party. Brewery owners Brendan Pleskow and Jenn Sickels, who specialize in making vegan beers, posted this message on Alternation's Facebook page:

The last six months have been challenging for everyone. And the last 32 months; well, they have been some of hardest years a young family should endure. We want to thank each and every one of you that has frequented our brewery. It has been our pleasure to serve such a deserving community. When one opens a niche concept, there is always extreme hesitation on behalf of the owners. You’re just never quite sure if anyone will care. All we can say is thank you for supporting a business that was different. We loved being different.


Alternation opened in December 2017 in a small space with a three-barrel nanobrewing system on which Pleskow made a variety of ever-changing one-off beers. Over the months, however, the brewery evolved into a vegan go-to as it produced popular dairy-free "milk" stouts and invited vegan food trucks to serve food to complement the beer. Here's more of what the owners wrote on Facebook:

The reason we are closing is exhaustingly difficult to pin down. COVID-19? Sure, absolutely. Mental health? Yes. Creative fatigue? Yes. If we were to boil the pot down to one answer, it would be relief. The life we started at Alternation was a constant roller coaster of emotions, everyday, for three years. This pandemic leaves us enlightened and incredibly humbled. Our business meant nothing to most, and at the same time, meant everything to so many that truly understood our impact. It’s what makes this so difficult.

Although COVID-19 is a large part of our closure, we would like our customers to know that the mask mandates and capacity limitations have very little to do with our closing. Times have changed, mindsets have changed, and we aren’t in a proper place to continue this journey. 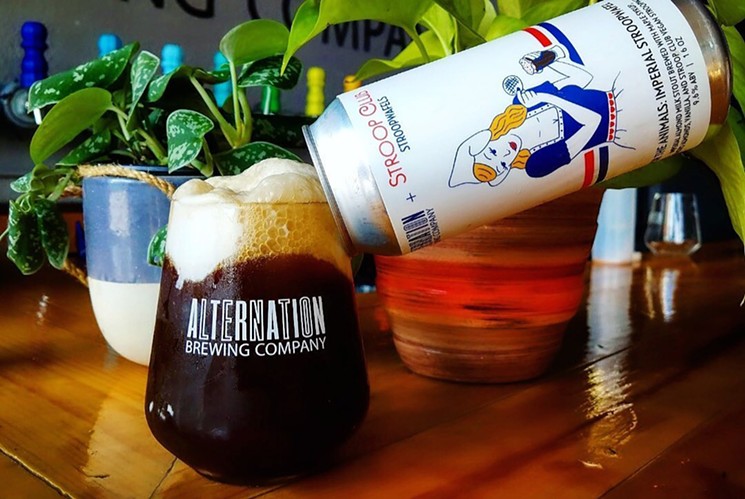 Alternation Brewing
Last week, the owners of Periodic Brewery, which had locations in Leadville and Thornton, also cited "relief" as one of the primary feelings they experienced when it came to closing their business.

More than a dozen breweries have closed so far this year in Colorado — six of them in Denver alone. Some have cited the COVID-19 pandemic as one of the reasons, but most had other problems as well. The Denver breweries that have closed are Declaration Brewing, Liberati Brewing, the Thirsty Monk and Next Stop Brewing. Good River Beer Company also closed its short-lived taproom, though it continues to brew and can beer.

Alternation says it has a small amount of beer left and that Pleskow and Sickels would love to have a chance to say goodbye, so although the brewery will be closed this week and weekend, they plan to host a going-away party at some point in the near future.
KEEP WESTWORD FREE... Since we started Westword, it has been defined as the free, independent voice of Denver, and we'd like to keep it that way. With local media under siege, it's more important than ever for us to rally support behind funding our local journalism. You can help by participating in our "I Support" program, allowing us to keep offering readers access to our incisive coverage of local news, food and culture with no paywalls.
Make a one-time donation today for as little as $1.