Colorado Sake Co. and Truffle Cheese Shop bring you a gouda and sake pairing this week. Colorado Sake Co.
This week brings a pair of pumpkin parties and Halloween movie classics, a sake and gouda tasting, a canceled debate (hurrah!) and more. Find the details below, and then keep reading for more food and drink events through the end of the month.

Monday, October 12
Colorado Sake Co. consistently has fun and tasty events running in its taproom at 3559 Larimer Street, and on Monday, October 12, it's teaming up with the Truffle Cheese Shop for a collision of Dutch and Japanese cultures. From 6:30 to 8 p.m., enjoy a cheese and sake pairing with a quartet of goudas from the Netherlands paired with four sakes: goat gouda with barrel aged sake, a parmesan and gouda hybrid with sparkling black cherry sake, sheep's-milk gouda and the bubbly Sake King, and truffle gouda alongside the sake brewery's American Standard. Tickets are $35 and available now on Eventbrite.
Tuesday, October 13
Tuesday, October 13, is 1) too soon to be carving pumpkins if you want an intact jack-o-lantern on Halloween, and 2) not Friday. But neither of those things are going to deter us from nabbing a table at Wild Corgi Pub, 1223 East 13th Avenue, on that date. For $20 per person, you'll get a cocktail, a pumpkin, a carving kit and a seat while the bar screens Friday the 13th (hopefully, the 1980 classic and not the 2009 remake). You can currently book tables for four, six or eight people from 7:30 p.m. to midnight on the bar's website, plus additional pumpkins for $8 each if you think you'll need a practice pumpkin first.
Wednesday, October 14
Don't want to find yourself elbow-deep in gourd guts while watching teenagers get disemboweled (among other things) at Camp Crystal Lake? We say you need  some holiday spirit, but if you're opting for the kinder, gentler version of pumpkin decorating (or if you're part of a pair that wants to celebrate), visit Denver Beer Co. for pumpkin painting on Wednesday, October 14. Both taprooms (1695 Platte Street, Denver and 5768 Olde Wadsworth Boulevard, Arvada) are offering offering two-hour slots (at 11 a.m., 1:30, 4 and 6:30 p.m.) for duos and foursomes to settle in with one beer, one pumpkin and painting supplies for $20. Additional pumpkins are for sale for $15, and a takeout option includes a pumpkin and six-pack of your choice for $22. Nab tickets on the brewery's website.

Movie night is back at Bistro Vendôme, which has moved the screen outside and under the stars for the fall months. Bundle up (the French restaurant at 1420 Larimer Street advises that you BYOB — bring your own blanket) for a 7 p.m. screening of the Sanderson sisters' magnum opus, Hocus Pocus. Call 303-825-3232 to reserve your seat for no later than 6:30 p.m.; the restaurant is serving a five-course prix fixe menu for $55 per person. 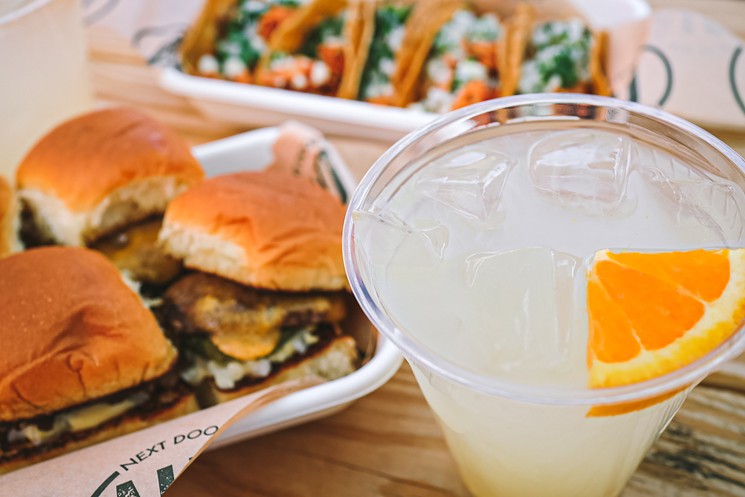 It's debate night (maybe). Drink up.
Next Door American Eatery
Thursday, October 15
Originally, all Colorado's Next Door American Eatery locations planned to offer happy hour pricing all day on Thursday, October 15, to help viewers make it through the painful and increasingly ridiculous exercise that is what passes for democracy in 2020: the second presidential debate. The debate has been canceled, but Next Door is standing by its campaign pledge of half-price pitchers and $2.50 cans of beer, $5 margs, and $2.50 cheeseburgers, Nashville hot chicken sliders and chicken tacos. So celebrate the cancellation of that shit show with more than a few drinks. And if for some reason you're committed to watching two old men hurl insults and interrupt each other more than toddlers with an underdeveloped sense of impulse control, you're in luck; Next Door will offer the same deal on October 22 (the next scheduled debate) and November 3 (Election Day), regardless of the bad behavior of either candidate (and by "either," we mean "Trump").

Friday, October 16
Everybody loves cooking with wine, but did you know you can actually add it to your food, too? If you're unsure how to incorporate the beverage into your cooking without burning off all the flavor compounds in the booze or you don't know your boeuf from your Bourguignon, consider attending Uncorked Kitchen's Vino Kitchen cooking class on Friday, October 16. From 6 to 9 p.m., the cooking school at 8171 Chester Street in Centennial will instruct you in grilling, sautéeing and baking with wine. You'll make sangria grilled shrimp, artichokes with white-wine garlic dip, zinfandel-marinated griled steak, red wine and pear hand pies, and more for $95 (which includes a drink that you'll be sipping straight from the glass instead of incorporating into your food). Sign up now on the Uncorked website.

And mark your calendar for these upcoming food happenings....