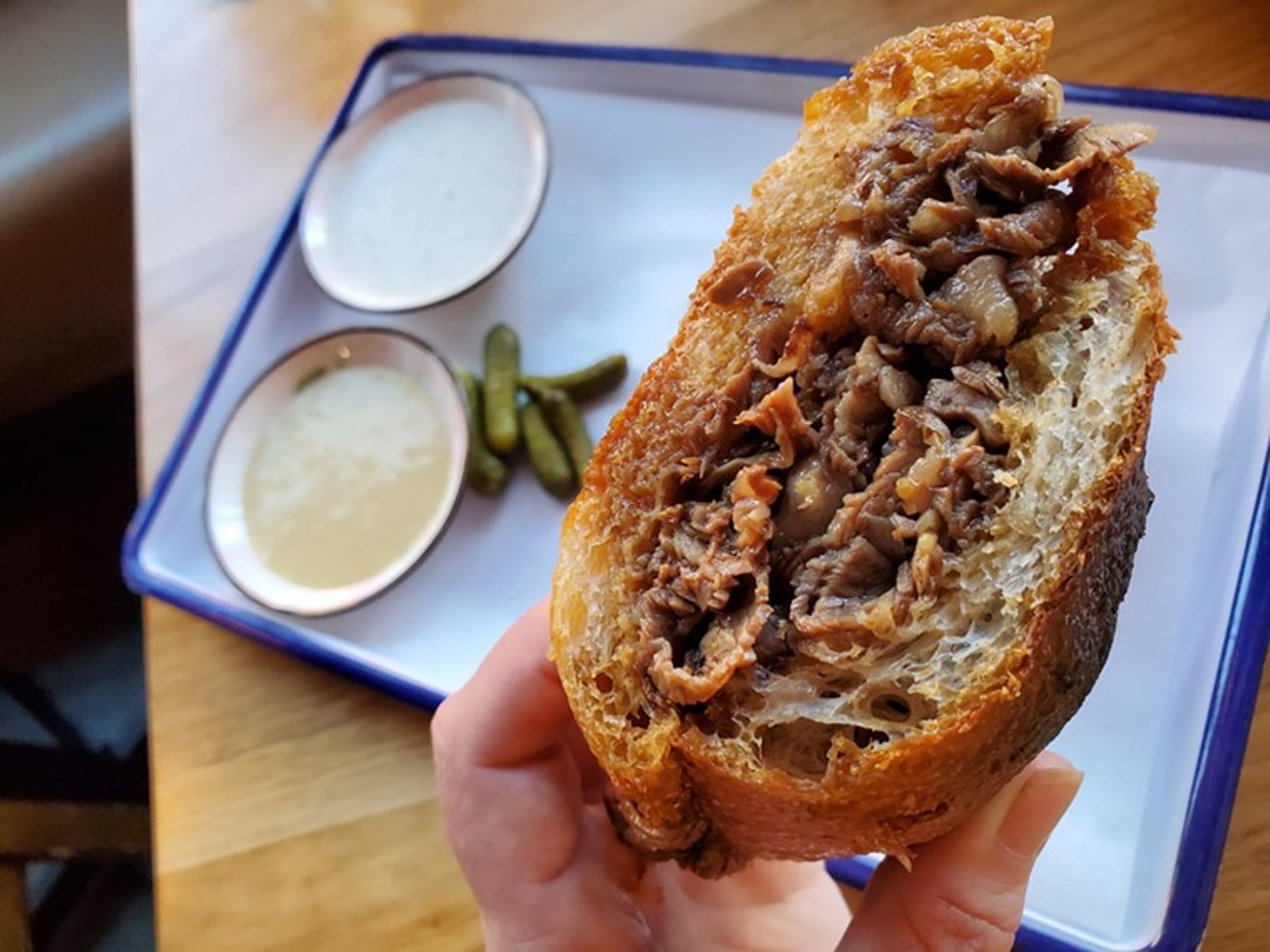 A5 has outstanding steaks, but the French dip is a must-try, too. Molly Martin
The chilly weather has us craving a sandwich with some real meat to it — something literally beefed up, like the French dip. Tradition calls for a crusty French roll, thin shavings of rare beef and a cup of meat drippings, or jus, to go with it. Some accepted variations include horseradish, melted white cheese or even grilled onions. But we aren't stopping there: One of our current favorites comprises lamb and Mexican spices, and another stars a unique jus that almost tastes like it has schmaltz (chicken fat) mixed in.

The French dip is a hearty order, for sure, and one that, when done right, can satisfy on all fronts. These ten restaurants are making a classic French dip right — or have come up with versions so tasty that you'll forgive any unconventional twists.

Here are the ten best French dip sandwiches in Denver:

1600 15th Street
303-623-0534
a5denver.com
With so many great meaty options at A5 Steakhouse, why should a simple sandwich be at the top of the list? One reason: wagyu beef, which comes sliced paper-thin and piled high on top of a soft, pre-dipped baguette. Like everything chef Max MacKissock sources for the restaurant, the beef is some of the best he can find. The sandwich also comes with a healthy slathering of horseradish and spicy mustard, which help to cut the richness of the tender meat. Find the $20 dip on the bar menu only, giving guests the opportunity to watch the cocktail show while dining. 4132 West 38th Avenue
720-749-3186
amelm.com
It takes two hands to hold the hearty French dip at American Elm, but once you've grasped it, you won't want to put it down. Created by executive chef Daniel Mangin, the sandwich comes on a soft Grateful Bread roll, which is piled high with slow-roasted and shaved ribeye and slathered with a slightly spicy horseradish aioli. Use the velvety jus for both the dip and the perfect fries that come with it. The $22 dish is big enough to share...but that doesn't mean you have to. 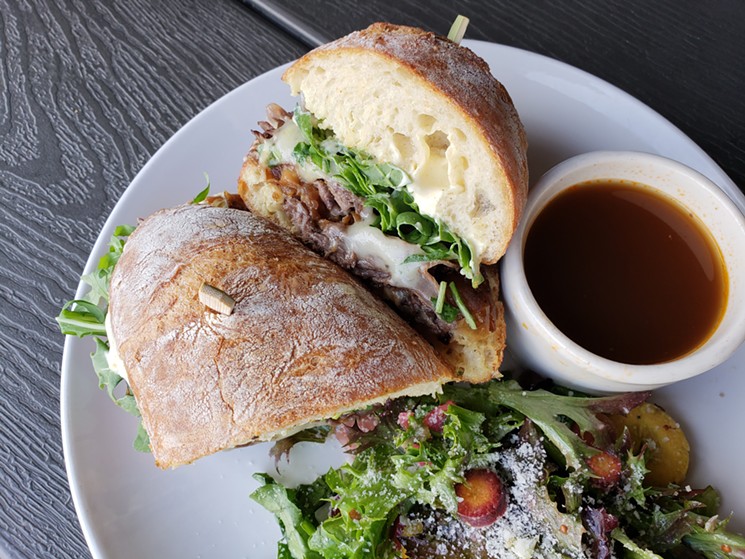 1644 Platte Street
303-455-3084
denverbrider.com
Although Brider, chef/co-owner Steven Redzikowski's fast-casual Highland eatery, is known for its rotisserie chicken, the wagyu French dip has a special place in our hearts. This lovely sandwich carefully marries thinly sliced tender wagyu from Colorado's 7X Ranch with tangy mustard, horseradish aioli and cheddar cheese, plus a rich jus to tie it all together. Get the dish for $16.50 during lunch or dinner served with chips, or consider upgrading your meal to include the baby kale and shaved apple salad, a version of the popular item from the restaurant group's now-shuttered Acorn.
click to enlarge 2651 West 38th Avenue
bodega-denver.com
Chef Cliff Blauvelt has been making waves with Bodega Denver, his new sandwich shop in Sunnyside, and, as do most of his offerings, the French dip ($16) slays. But it's not an average French dip: Instead of shaved beef, Blauvelt and chef Jesse Moore make it with lamb birria, a technique involving braising the meat overnight in tomatoes, broth, chiles and other spices, which causes the lamb to basically fall off the bone into a tender, flavorful mess. From there, the meat is piled high on a hoagie from City Bakery, with fresh radish, burnt-onion mayo, arugula and queso asadero added on top. The jus is made with the braising liquid from the lamb, and while nothing is traditional about this French dip, it's a delicious — and memorable — option. The French dip at Culture Meat & Cheese is a must for any fan of the sandwich.
Linnea Covington

2669 Larimer Street
303-292-2222
culturemeatandcheese.com
On the south side of Denver Central Market in RiNo is the bustling counter hosting Culture Meat & Cheese, Justin Brunson's sandwich and charcuterie shop. The French dip served here popped up on the specials menu often enough that it has now become a permanent fixture for $14.95. Luckily for us, it's truly one of the best in the city. The baguette comes fresh from Marczyk Fine Foods, and it gets toasted before a pile of thinly sliced roasted beef, horseradish aioli, caramelized onions and Swiss cheese is added. The jus works perfectly to pull it all together, though the sandwich is just as good without it. 717 17th Street
303-405-7575
french75denver.com
While you probably shouldn't eat this massive sandwich in its entirety, chances are you won't be able to stop yourself. Yes, the $21 French dip at Frank Bonanno's downtown spot French 75 is that good. The hoagie comes from the restaurateur's nearby bakery, LoDough, and acts as the ideal vehicle for a heap of shaved, mid-rare rotisserie-roasted sirloin. There's nothing else to the simple but perfect sandwich, save for a bowl of jus for dipping, and we wouldn't have it any other way. The Denver Dip at the Grateful Gnome in Berkeley.
Linnea Covington

4369 Stuart Street
720-598-6863
thegratefulgnome.com
In the Berkeley neighborhood resides the Grateful Gnome, a local hot spot for beer and eats that landed on our list of the ten best sandwich shops in Denver. Along with East Coast staples like the chopped cheese and Taylor ham, its menu includes the Denver Dip, which is like a French dip with provolone and Swiss cheese melted onto the bread. The beef is sliced, though not as thinly as on the classic version, but the jus is just as rich and satisfying as all the rest. And at $11.50, it's one of the less expensive dip options around town.
click to enlarge 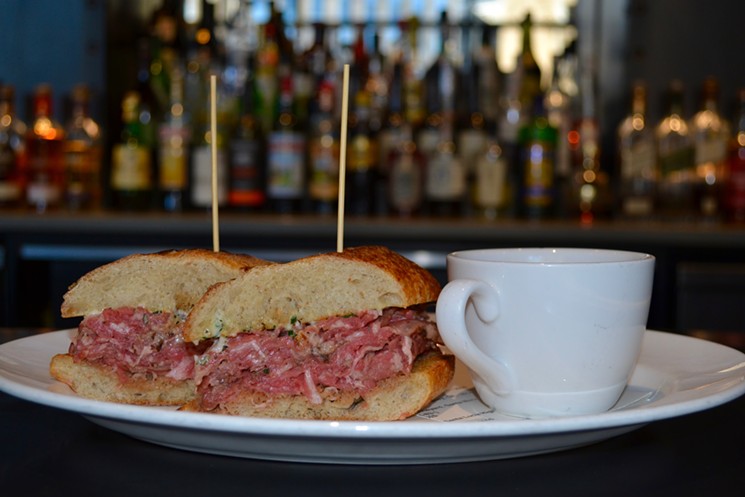 1801 California Street
303-293-8500
guardandgrace.com
Since opening in 2014, Troy Guard's downtown steakhouse, Guard and Grace, has made one of the best French dips in the city. The venue's own steak seasoning adds flavor to thinly shaved piles of low-and-slow-cooked prime rib on a hearty hoagie that's griddled with butter and slathered with a fresh thyme-garlic aioli. "We wanted to keep it minimal and showcase the highest-quality ingredients," says Guard. Dip the creation into the scrumptious drippings (made from steak trimmings), or slather it with creamy horseradish sauce. Either way, this $20 sandwich is this steakhouse's go-to at lunchtime.
click to enlarge 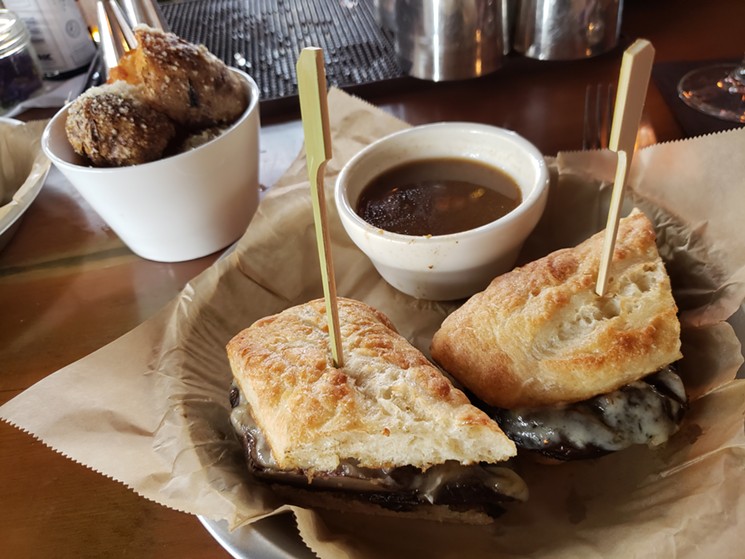 The Smoked Mushroom, a pecan-smoked portobello dip at Pony Up.
Linnea Covington

1808 Blake Street
720-710-8144
ponyupdenver.com
Denver never knew it needed a place dedicated solely to the wonderful dip sandwich until Angela Neri unveiled Pony Up downtown. The late-night, laid-back eatery specializes in an array of dips to go with bar manager Suzanne Navarro's equally tasty cocktails. If you want traditional, go with the Alameda Street Classic, made with shaved beef, rosemary, mayonnaise and a lovely jus to soak it in. For guests looking for something a little different, the Frenchie carries layers of thin roast beef, Gruyère, thyme and crispy onions, with a version of French onion soup for the sauce. Vegetarians can even get in on the magic with the Smoked Mushroom, which swaps in superbly smoky portobello, along with Swiss cheese and an oh-so-velvety porcini broth. Indulge in these dips, which will run you $14 to $17, in the hip, relaxing bar every day between 11 a.m. and 2 a.m.
click to enlarge Try the French dip at Zaidy's for a classic version of the sandwich.
Linnea Covington

600 South Holly Street
303-333-5336
zaidysdeli.com
When Zaidy's moved to the Hilltop neighborhood and was taken over by Joel Appel and Beth Ginsberg in 2021, the classic Jewish deli kept a lot of the old menu made popular by longtime owner and founder Gerard Rudofsky. But one thing that wasn't on the Cherry Creek menu was a French dip, something the new guard helped rectify. And we're so glad it did, because it's a perfect example of a classic dip sandwich, coming in at $14.50 with your choice of side. The hoagie is soft and pliable but sturdy enough to stand up to the pile of beef and rich jus, which is lighter in color and a little fattier than most of the others we've tried. It's almost as if a bit of schmaltz might be mixed in — which wouldn't be a bad thing at all.
KEEP WESTWORD FREE... Since we started Westword, it has been defined as the free, independent voice of Denver, and we'd like to keep it that way. With local media under siege, it's more important than ever for us to rally support behind funding our local journalism. You can help by participating in our "I Support" program, allowing us to keep offering readers access to our incisive coverage of local news, food and culture with no paywalls.
Make a one-time donation today for as little as $1.