When Is It Oktober in August? When Craft Breweries Say It Is This space on Westword's website used to be reserved for pumpkin beers: which ones are new; why do they arrive so early; where to go to get good ones; and even a spirited defense of their very existence.

But the discourse and discord (dis-gourd?) over pumpkin beers and the concept of seasonal creep (the style showing up in August, a full three months before Halloween) has faded quite a bit since a flood of pumpkin beers in 2016 and 2017 resulted in a lot of un-purchased beer and a general ramping back of the frenzy.

Instead, craft breweries in Colorado and across the country have latched onto Oktoberfest-style lagers, which lack the polarizing views that pumpkin beers create since they have some tradition behind them. Like their fall-colored cousins from the pumpkin patch, though, Oktoberfest beers are showing up earlier and earlier as more and more breweries make them — and compete for shelf space as seasonal selections.

So are Oktoberfests the new pumpkin beers? After all, the official dates for Oktoberfest in 2021 are September 18 to October 3 (Munich's famed festival has been canceled, however, for the second year in a row, because of the pandemic). The answer is no, probably not. For starters, the beers are lighter, easier to imbibe and don't engender hatred. They are also associated with German traditions dating back hundreds of years, as well as with what are becoming St. Patrick's Day-style American drinking parties that help keep people primed for pretzels, funny costumes, stein-hoisting contests, tuba and accordion music, and lots of lager.

Ska Brewing
Still, we may see a glut of Oktoberfest lagers — which actually include a range of related styles, from darker, sweeter Marzens to malty Vienna lagers to lighter, crispier Helleses — in cans and bottles this year. I know of at least two dozen breweries so far that plan to package their offerings, while another two dozen or so are likely to arrive from out-of-state, among them La Cumbre, Firestone Walker, Sierra Nevada, Shiner, Bell's, Samuel Adams, and from overseas, including Paulaner, Spaten, Hofbrau, Hacker Pschorr, Bayern and Ayinger. Dozens of other breweries will brew Oktoberfest beers for draft-only sales or to sell in Crowlers or small runs of cans.

In 2020, a few more local breweries joined the club of packaged Oktoberfests, including Wiley Roots Brewing, River North Brewery, New Image Brewing and Crooked Stave (which chose to make a lighter festbier rather than a Marzen). This year, Epic Brewing is entering the fray as well, having just released Munich Mayhem Marzen in its taproom in cans, as is Upslope Brewing, which is debuting a festbier-style lager.

That could result in a significant backing away from the style in future years if a lot of it goes unsold in beer stores and bars, à la pumpkin beers. Then again, it's easier to keep drinking Marzens into the winter and even the spring, whereas cinnamon-and-clove-flavored beers lose their allure all at once on November 1.

So, how should you wade through the myriad options that will become available starting this week? Here's a rundown of what to look for and which are the best: 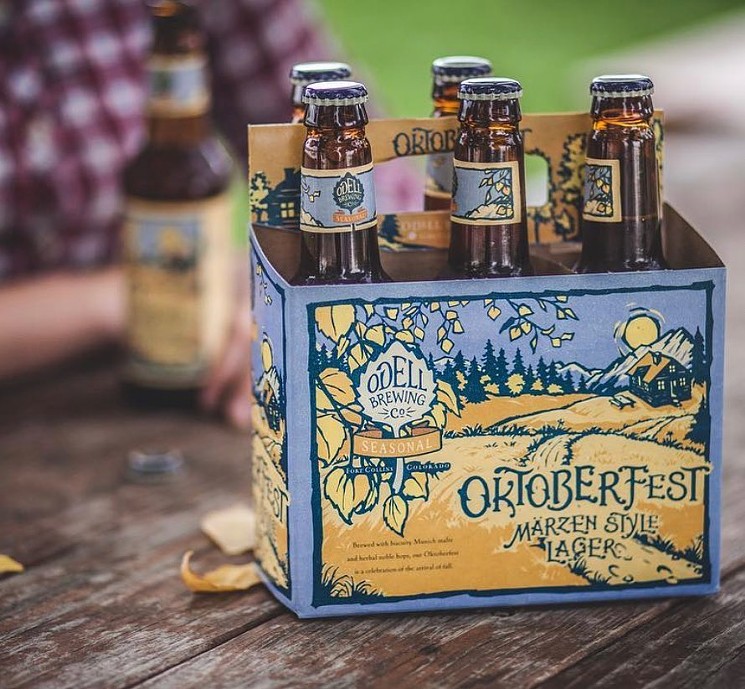 Odell Brewing
Most Oktoberfest beers made by American craft breweries fit into two style categories: Marzens, which are often reddish-orange, between 5 and 6 percent ABV and with some bready sweetness (although some are drier); and Vienna lagers, which are very similar, though slightly lighter in color and ABV, and with less sweetness. The styles overlap quite a bit among beers labeled as Oktoberfests, and it's hard to tell the difference. The remaining Oktoberfest lagers are often described as "festbiers," and resemble the much lighter, straw-colored Helles style that Munich is famous for and which Bavarian breweries mostly serve nowadays at the festival itself.

In my opinion, the two best Colorado-made Oktoberfests, among those that are distributed widely, are Odell's Oktoberfest, a 6.1 percent ABV Marzen that is often imitated and much loved; and Ska Oktoberfest, a new standard-bearer that debuted in 2018 and immediately won gold at the Great American Beer Festival in the Vienna Lager category. Both are slightly sweeter and breadier; they'll hit shelves as soon as this week.

Among the smaller breweries, it's no surprise that Bierstadt Lagerhaus stands out — not just in my mouth, but on BeerAdvocate's list of Colorado lagers, where it is among the top Marzens. It's also worth waiting for, as the brewery doesn't tap its Marzen until the actual start of Oktoberfest, on September 18.

Wibby Brewing
Some of my other favorites — based on a blind tasting I hosted last year — include Telluride Brewing's Oktoberfish (which may or may not return this year), Great Divide Brewing's Hoss, Ratio Beerworks' Stay Gold and Bonfire Brewing's Marzen. In addition, Avery Brewing's delicious The Kaiser Imperial Oktoberfest Lager is absolute malt candy, weighing in at a whopping 8 percent ABV. Station 26 Brewing also makes a fantastic 8 percent imperial version, while Comrade Brewing consistently turns out its balanced Hunt for Red Oktoberfest.

On the drier side, Dry Dock Brewing's Docktobefest, Left Hand Brewing's Oktoberfest Marzen Lager and Prost Brewing's Marzen are routinely named among many people's favorites in Colorado. The first two are past GABF medal winners, while Prost's is the top-rated Colorado Marzen on the BeerAdvocate rating site and recently scored a 99/100 on Beer & Brewing's list of Oktoberfest lagers nationwide.

Prost!
KEEP WESTWORD FREE... Since we started Westword, it has been defined as the free, independent voice of Denver, and we'd like to keep it that way. With local media under siege, it's more important than ever for us to rally support behind funding our local journalism. You can help by participating in our "I Support" program, allowing us to keep offering readers access to our incisive coverage of local news, food and culture with no paywalls.
Make a one-time donation today for as little as $1.