Thanks our proximity to the airport, Denver has easy access to fresh oysters. Molly Martin
Confession: I didn't eat an oyster until my late twenties, despite having grown up in Vermont, mere hours from the coast of Maine. I was, admittedly, an annoyingly picky eater as a kid.

A decade ago, I found myself at the opening party for The Kitchen in Denver. I was brand-new to food writing and knew no one at the event, which had drawn an intimidating crowd, including then-Mayor John Hickenlooper. There was a huge tower of raw oysters in the center of the room, and as I made small talk with a stranger, she reached for one, so I did the same, not wanting to look as out of place as I felt.

I quickly made my way far from that tower of bivalves, wondering why people loved oysters so much.

Flash-forward a few months later. After receiving an invitation to go to Jax Fish House in LoDo to learn more about its oyster offerings, I drove over prepared to eat one or two while blending in with what I thought would be a group of local media members. Instead, it was just me, one other person and Jax's chef at the time, Eric Lee. He was stoked on oysters, understandably, and the next thing I knew, three dozen arrived at the table.

Suddenly I was ten oysters in and about to do a vodka oyster shooter with Lee. I left buzzed and in a haze of brininess, feeling nearly nauseous, but also forever changed.

Every time I encountered oysters on a menu after that, I ordered them — just two or three to start. Then I graduated to half-dozens, then multiple dozens shared with friends at happy hour. I become well-versed in mignonette. I explored grilled oysters. I slurped them down everywhere, from San Francisco to Maine to New Orleans. I was hooked. I got to spend hours with Rappahannock Oyster Co. co-owner Ryan Croxton, who showed me the entire operation, drove a boat out to the oyster farm, and afterward downed a couple dozen with me at the company's waterside restaurant, Merrior. Among many other things, I learned that oysters arriving in Denver are often fresher than those in some coastal towns because of our proximity to an international airport (freight shipping takes much longer). And, more important, that eating fresh oysters here helps balance coastal waterways there.

Ever since, I've savored every oyster even more. And so should you.

Here are my six favorite places to eat oysters in Denver, in alphabetical order: 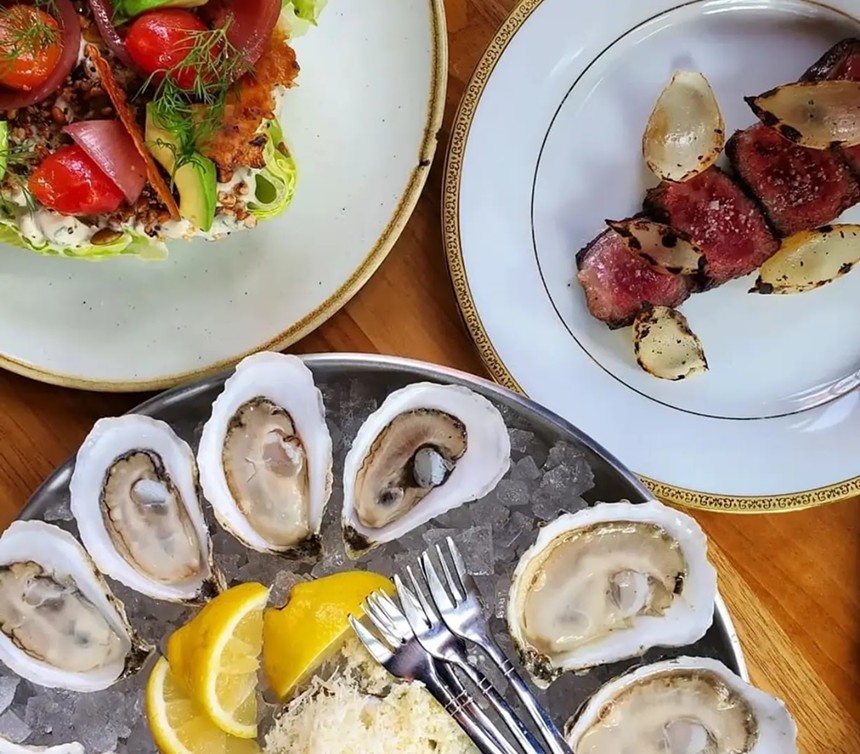 Indulge with wagyu steak and oysters at A5.
Molly Martin
A5 Steakhouse
1600 15th Street
303-623-0534
a5denver.com
Our 2022 pick for the Best Steakhouse is a swanky, lively spot with top-notch beef, but its oyster game is also on point. The varieties are sourced via Ben Wolven, aka Oyster Wulff, from small operations in Maine. Swing by from 3:30 to 5 p.m. (or 5:30 p.m. at the bar) to slurp on selected oysters of the day for $1.50 each during happy hour. Pair them with A5's signature wagyu beef and a wedge salad for a truly indulgent meal. Grilled and raw oysters at Angelo's.
Molly Martin
Angelo's Taverna
620 East Sixth Avenue
303-744-3366
6885 South Santa Fe Drive, Littleton
720-532-1389
angelostaverna.com
The original Angelo's on Sixth Avenue has been a landmark of Italian dining for over forty years. More recently, along with the housemade limoncello that lines a wall in the bar area, the best reason to visit is the oysters — and the same goes for the second Angelo's in Littleton. The selection of raw oysters changes regularly, and you can nab the house variety for $1 each during happy hour (3 to 6 p.m. and 9 p.m. to close daily). The garlicky, buttery "original" chargrilled oysters are $2 during happy hour, or you can opt for one of the other flavors like chipotle bourbon butter or bacon Gorgonzola. Annette recently added oysters.
Molly Martin
Annette
2501 Dallas Street, Aurora
720-710-9975
annettescratchtotable.com
This restaurant from James Beard Award-winning chef/owner Caroline Glover has impressed diners since opening at Stanley Marketplace in 2017. After reinventing itself as a to-go operation during the pandemic and then reinventing itself yet again as it transitioned back to regular service, Annette has come out of a tumultuous two and a half years stronger than ever. Plus, it now serves oysters. Recently added to the menu, they're served simply with mignonette, fresh horseradish and lemon. During happy hour, which is all night on Tuesdays and from 4:30 to 5:30 p.m. Wednesday through Sunday, they are $1 off. The selection rotates according to what's available, but there's usually one East Coast and one West Coast option to choose from. Go to Cart-Driver for oysters and pizza.
Molly Martin
Cart-Driver
2500 Larimer Street
303-292-3553
2239 West 30th Avenue
720-501-2264
cart-driver.com
One of the ten best pizza places in town is also one of the best places to enjoy oysters. Head to either location to load up on the current oyster selection, served with fresh horseradish, lemon and a rotating mignonette. You can (and should) also double down on the seafood by adding some tinned fish, served with hot and steamy piada bread, black olive butter and sambal pepper relish. 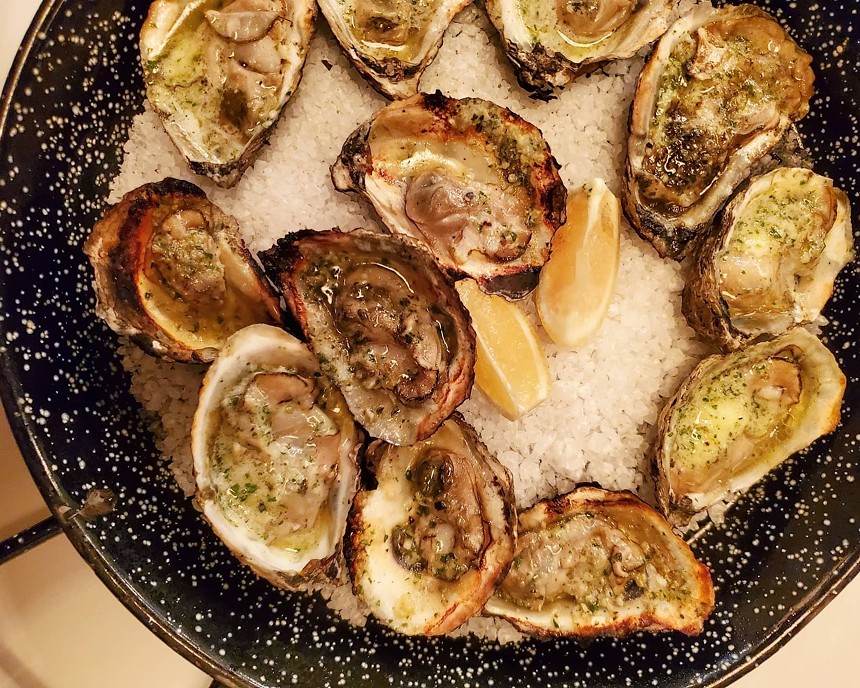 Wood-fired is the way to go at Fish N Beer.
Molly Martin
Fish N Beer
3510 Larimer Street
303-248-3491
fishnbeerdenver.com
With a rotating selection from both coasts, this seafood spot from Tacos Tequila Whiskey owner Kevin Morrison has its oyster game on point. You can go for raw, but there's something special about snagging a seat at the bar in front of the wood-fired grill and watching the action as you enjoy grilled oysters with garlic or "devil" (spicy) butter. Both raw and grilled varieties are $2.50 for happy hour (Tuesday through Thursday from 5 to 6:30 p.m.) 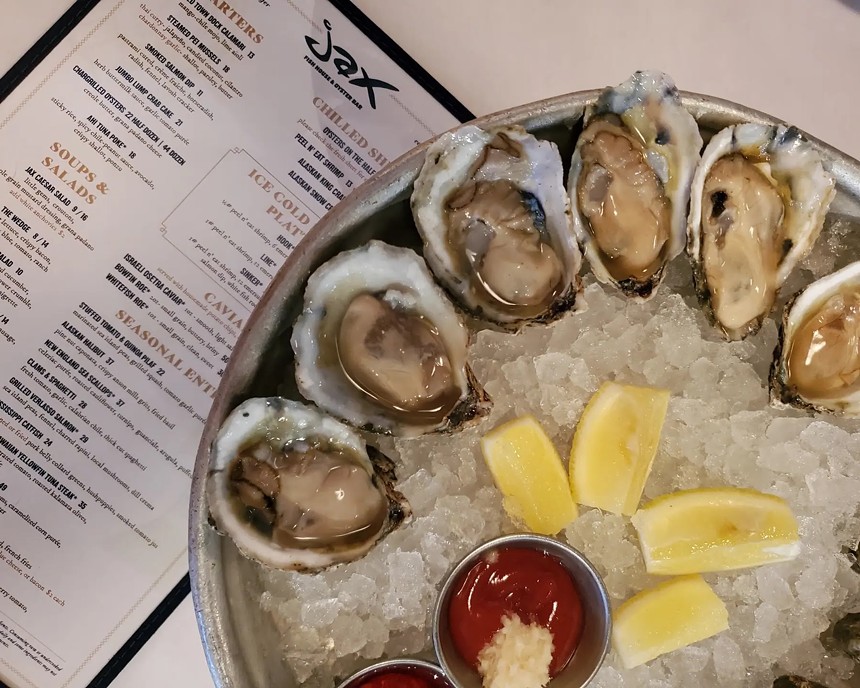 Emersum oysters at Jax Fish House taste as fresh in Denver as they do just feet from where they're grown in Virginia.
Molly Martin
Jax Fish House
Multiple locations
jaxfishhouse.com
One of the OGs of Denver's seafood scene, Jax remains a go-to for all things tasty from the ocean, but it's particularly passionate about oysters — it even has an Oyster Club! Along with its signature Emersums, Jax offers a variety of oyster options daily, available raw or chargrilled with Creole butter. During happy hour (3:30 to 5 p.m. daily), raw oysters are $2 each, or opt for an oyster po'boy for $14.
KEEP WESTWORD FREE... Since we started Westword, it has been defined as the free, independent voice of Denver, and we'd like to keep it that way. With local media under siege, it's more important than ever for us to rally support behind funding our local journalism. You can help by participating in our "I Support" program, allowing us to keep offering readers access to our incisive coverage of local news, food and culture with no paywalls.
Make a one-time donation today for as little as $1.